The proposed mechanism of the product formation is a cathodic electrochemical generation of phosphine, PH3, followed by its anodic oxidation to H3PO and reaction of the formed intermediate with ketones. This mechanism was proved by comparison of two methods of synthesis: in divided and undivided electrochemical cells (Fig. 1). In a divided cell, the reaction of ketone with formed PH3 does not occur, because the anodic surface is separated, and the oxidation of PH3 to H3PO does not happen.

According to literature data, chemical interaction of ketones with PH3 is possible only under strict conditions: highly acidic or basic medium, high temperatures and high pressure. Moreover, the interaction of РН3 with ketones leads to the formation of only primary alkylphosphine oxides R2С(Н)P(O)H2, without a hydroxyl group at the α-carbon atom in the alkyl substituent of the phosphorus atom [2]. Unlike chemical methods of phosphine synthesis, electrochemical reduction of P4 proved to be less expensive and gives PH3with a sufficient degree of purity [3].

The obtained phosphine oxides RR’C(OH)P(O)H2 and {RR’C(OH)}2P(O)H have different kinetic and thermodynamic stability, which can be explained by steric hindrance from aliphatic groups attached to the carbonyl atom of the ketones. Quantum chemical calculations of the thermodynamic stability of the products from the reaction of H3PO with ketones were performed with density functional theory (DFT).

The used electrochemical method of synthesis is simple, does not require complicated equipment and is ecologically safe. 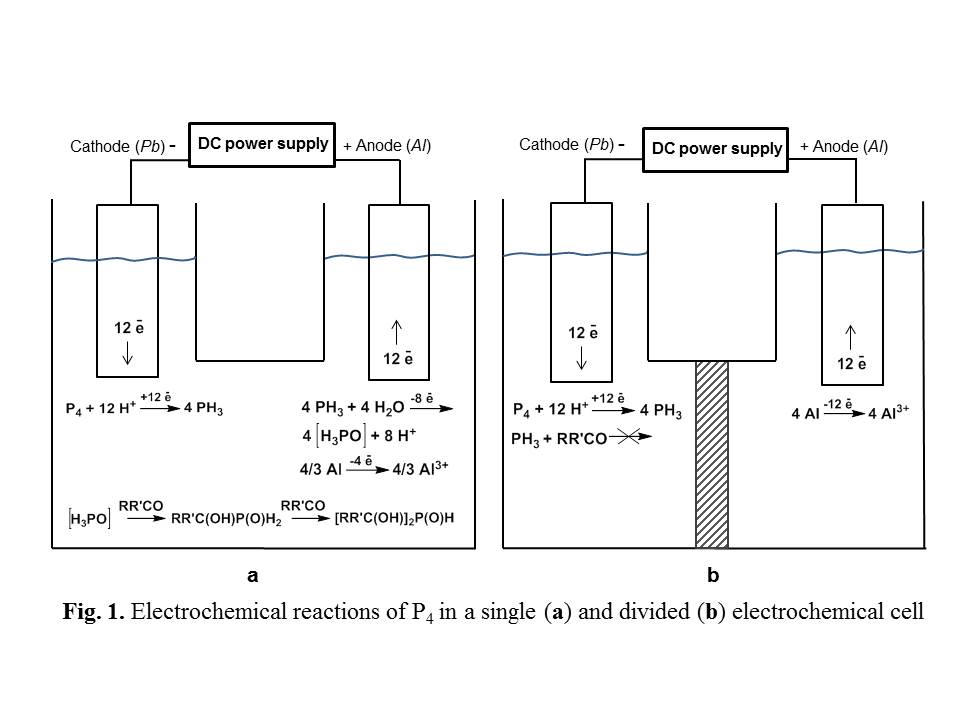