National Harbor 1 (Gaylord National Resort and Convention Center)
F. Sun, H. Markötter, I. Manke, A. Hilger, and N. Kardjilov (Helmholtz-Zentrum Berlin)
Lithium (Li) metal, due to its high theoretical specific capacity (3860 mA h/g), low density (0.59 g/cm3) and the lowest negative electrochemical potential (-3.04 V vs. the standard hydrogen electrode), is widely considered as the most promising candidate for the next generation energy storage systems such as lithium-sulfur and lithium-air batteries. In addition, it has been currently used as a standard counter electrode for the evolution of new cathode or anode materials in half-cells. Unfortunately, the commercialization of Li metal as a negative electrode has not been succeeded due to the intrinsically uncontrolled growth of Lithium micro-Structures (LmSs, eg., dendrites, fibers) since the early investigation in 1970s. Although various characterization techniques such as optical microscopy, atomic force microscopy (AFM), scanning electron microscopy (SEM), transmission electron microscopy (TEM) and magnetic resonance imaging (MRI) have been employed to characterize the morphological changes of Li electrodes, our understanding towards the evolution of Li during operational cycling has not greatly improved owing to these inherently limited analytical tools. The challenge of a detailed nondestructive characterization way and a comprehensive analysis of correlation between the evolution of Li electrodes and the battery electrochemical performance still remains.

In the present demonstration, the powerful characterization tool, synchrotron X-ray phase contrast tomography imaging technique will be employed to characterize the evolution of Li electrodes during cycling. To this end, we have designed and fabricated a tomography cell (tomo-cell) for the three-dimensional nondestructive investigation, as shown in Fig. 1, along with a schematic illustration of the beamline set-up.

Fig. 1. a) Photograph of the fabricated proof-of-concept cell. b) Corresponding schematic representation of the cell consisting of a polyamide-imide housing (brown), two screw electrodes and retaining screws each on top (light grey), two sealing rings (yellow), a porous separator (white) sandwiched between two electrodes (blue and green). c) Schematic representation of the experimental setup of the tomography station at the BAMline at BESSY II, Helmholtz-Zentrum Berlin, Germany. This figure has been adapted from ACS Energy Lett., 2017, 2, pp 94–104, with permission by the American Chemical Society.

Selected results of our previous investigations using this tomo-cell about the evolution of Li electrodes in half-cells (lithium-silicon, lithium-sulfur and lithium-lithium cobalt oxide) and symmetrical cells (Li-Li) will be briefly demonstrated. The morphological evolution of Li electrodes based on these measurements will also be summarized. These unprecedented findings, which were not accessible from conventional microscopic characterizations and electrochemical measurements, fundamentally deepen our understanding of the evolution mechanism of Li electrodes during battery cycling. The insights obtained could open up the way toward design principles and opportunities to accelerate the commercialization of Li metal. 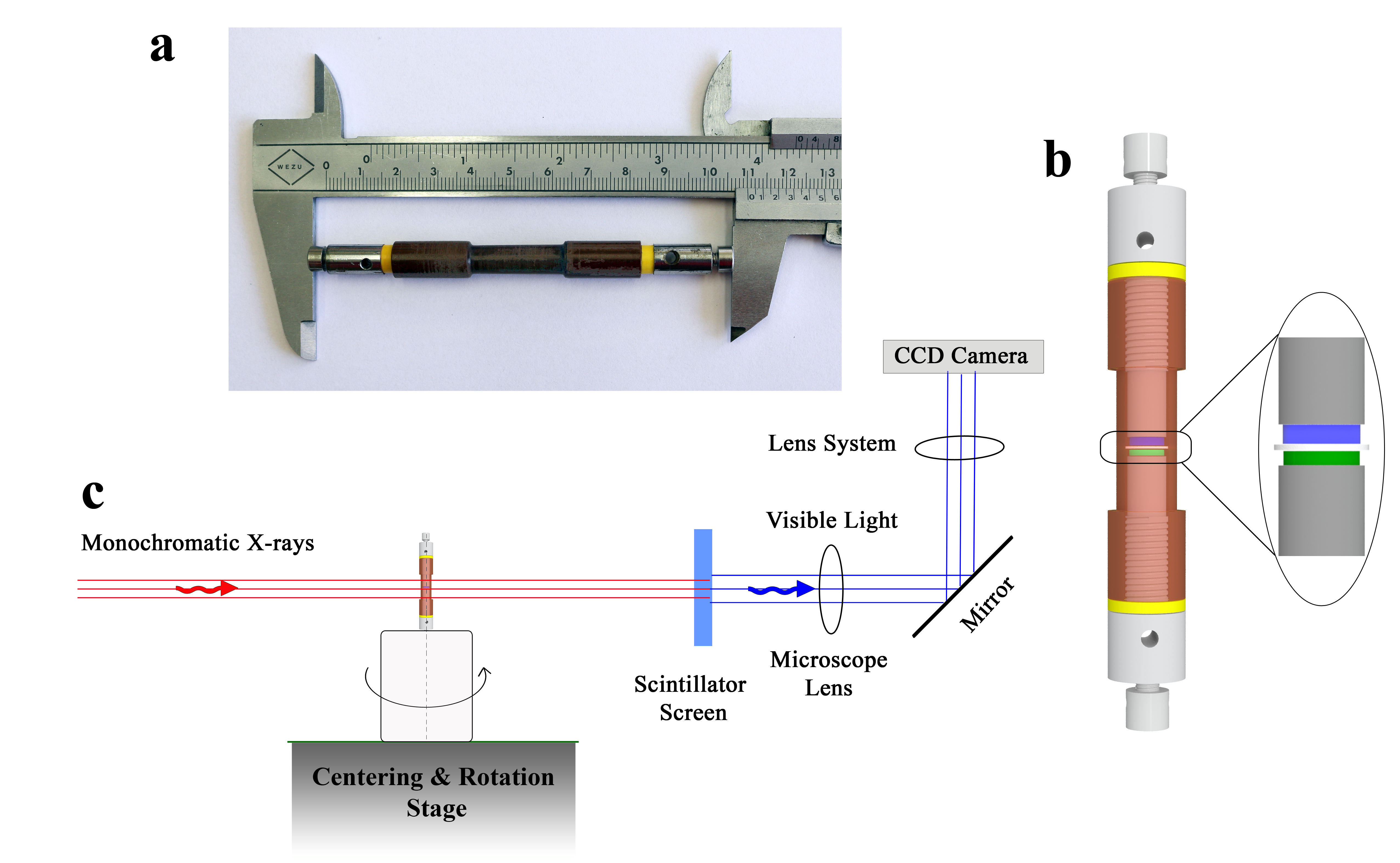