National Harbor 6 (Gaylord National Resort and Convention Center)
T. Ozawa, H. Najima, M. Ichimura, and M. Kato (Nagoya Institute of Technology)
The hydrogen generation by the photolytic of water using the semiconductor photocatalyst attracts attention as the eco-friendly technology. Rutile TiO2 is a typical photocatalyst material because of its stability against corrosion in electrolyte.1) Nb doping to TiO2 enhances electrical conductivity and visible light absorption, and thus increases their photocatalytic performance.2, 3) One of the factors affecting the photocatalytic activity is the survival time of electrons and holes released in the photocatalyst material, i.e. the carrier lifetime.4, 5) However, there is a few report on the influence of carrier lifetime on photolytic performance for Nb-doped TiO2 single crystals. Therefore, we measured carrier lifetimes and photocurrents for TiO2single crystals with different Nb doping.

The samples were Nb-doped rutile TiO2 single crystals with concentration of 0.01 wt% and 0.05 wt%. We called these samples Nb-0.01 and Nb-0.05. Both samples were polished on the (110) face, and their thickness was 0.5 mm. Carrier lifetimes of both samples were measured by microwave photoconductivity decay (μ-PCD) method. In μ-PCD, the sample was excited by a pulsed light and the conductivity was probed by reflection of 10 GHz microwave. We used a 355 nm pulsed YAG laser with injected photons of 8.5×1013 cm-2. Then we measured chopped light photocurrent-potential (I-V) measurements with the three-electrode system. The three-electrode system consisted of TiO2 electrode, Pt and a saturated calomel electrode (SCE) as working, counter and reference electrodes, respectively. Electrolyte was an aqueous solution of 1 mol/L H2SO4. The light source was a solar simulator with a power density 100 mW/cm2, and the light was mechanically chopped.

Figure 1 shows μ-PCD decay curves for Nb-0.01 and Nb-0.05. The decay for Nb-0.01 was slower than that for Nb -0.05. For Nb-0.01, the carrier lifetime estimated from slopes of exponential parts was ~25 ns, which was longer than that observed for Nb-0.05. From these results, we can conclude that with higher Nb doping concentration, the carrier lifetime is shorter. Deep level formed by Nb doping would act as a recombination center of electron-hole pairs.6) Figure 2 shows chopped light I-V curves for Nb-0.01 and Nb-0.05. For Nb-0.05, the onset potential was about -1.4 V vs SCE and the photocurrent was 0.36 mA/cm2 at 1.5 V vs SCE. For Nb-0.01, the onset potential was the same as for Nb-0.05, while the photocurrent was 0.72 mA/cm2at 1.5 V vs SCE. Therefore, the photocurrent is larger for the sample with lower Nb doping concentration. 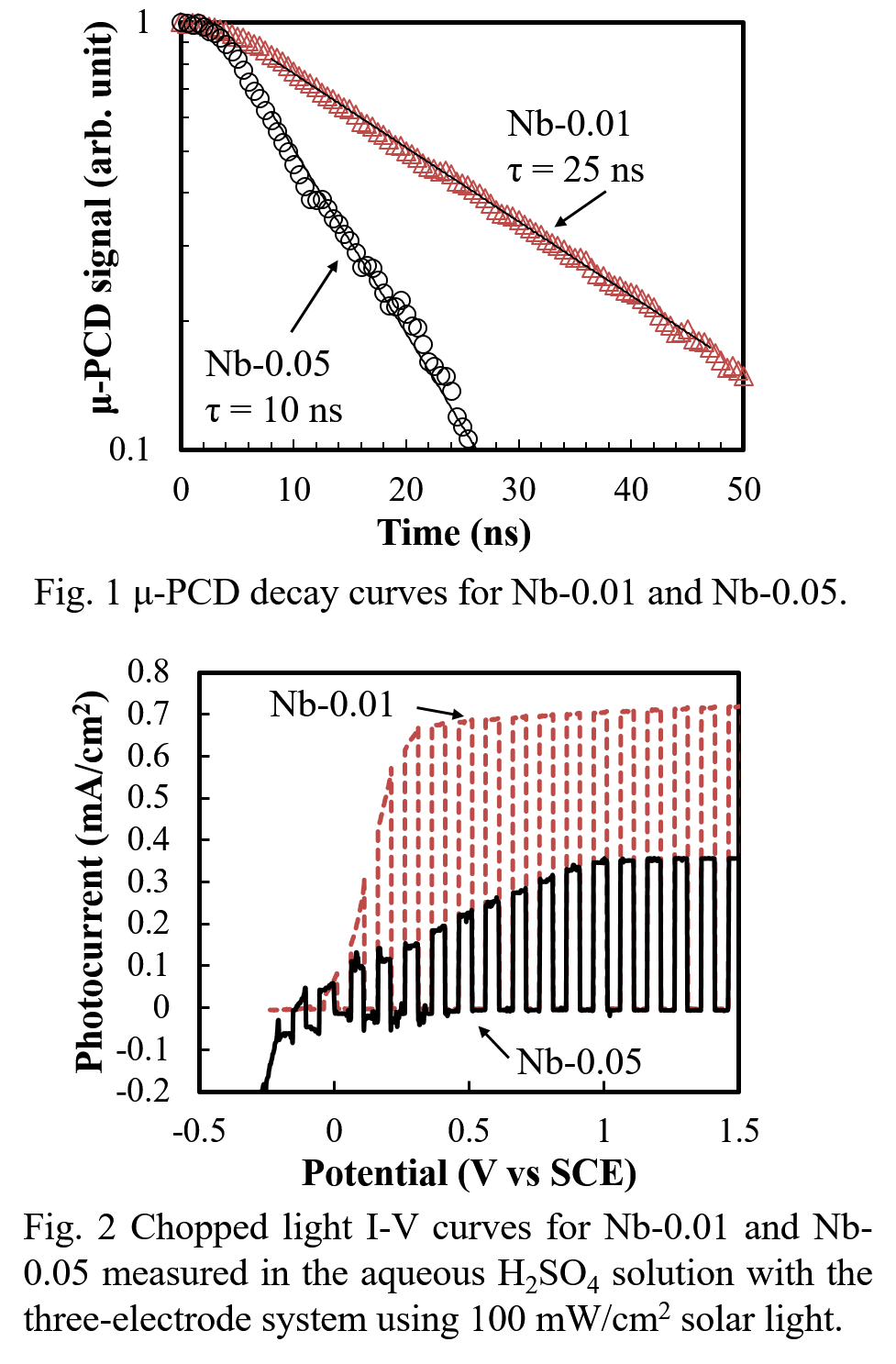