Water splitting into H2 and O2is attracted as one of useful strategies to produce hydrogen. This reaction is separated to two half redox reactions.

In general, water oxidation reaction is the rate determination step in water splitting because 4 electrons are involved in the reaction. Various catalysts aiming to enhance water oxidation have therefore been investigated. Metal oxides have been applied to such water oxidation catalysts for photochemical and electrochemical water oxidation. These metal oxide materials are also applied in the form of nanoparticles on the surface of a semiconductor, which are called cocatalyst. For example, IrOx, CoOx and RuO2are well known as not only bulk catalysts but also useful cocatalyst materials for water oxidation.

Recently, our group has reported that Fe(III)-Cr(III) mixed oxide nanoparticles worked as cocatalysts for photocatalytic water oxidation, even better than pristine Fe2O3. However, the detail mechanism of the promotional effect caused by Cr(III) substitution has been still unclear. Nanoparticle cocatalysts loaded on a semiconductor photocatalyst worked as reaction sites for water oxidation or reduction by collecting holes/electron generated in the semiconductor. So they can be regarded as electrocatalysts for water splitting. To investigate the effect of Cr(III) substitution for Fe2O3, we focused material characteristics using bulk Fe(III) and Cr(III) mixed oxide particles as model compounds. In the present study, we examined the catalytic performance of Fe(III)-Cr(III) mixed oxide (Fe2-xCrxO3) for water oxidation under photochemical and electrochemical condition as shown in Scheme 1, aiming to investigate the promotional effect of Cr(III) substitution for Fe2O3.

Fe2-xCrxO3 was prepared by a precipitation method. Appropriate amounts of Fe(NO3)3·9H2O and Cr(NO3)3·9H2O were dissolved in 20 mL of pure water. After addition of 1 mL NH3 aqueous solution, the precipitates were dried at 343 K for overnight. After grinding, the products were calcined at 823 K for 2 h after heating at 623 K for 2 h. Photochemical water oxidation activity was investigated under visible light irradiation (480 < λ < 500 nm) in the presence of tris(2,2’-bipyridyl)ruthenium(II) sulfate as a photosensitizer and sodium persulfate as a sacrificial electron acceptor. Electrochemical water oxidation was conducted in a phosphate buffered aqueous solution (pH 7.5) using three-electrode configuration, which consisted of a Ag/AgCl reference electrode, a Pt wire counter electrode and the Fe2–xCrxO3/FTO working electrode.

Result and discussion In photochemical water oxidation reaction, Fe2O3 showed catalytic performance for O2 evolution. Comparing to Fe2O3, the O2 evolution activity is dropped with increasing Cr ratio. Because the photochemical reaction proceeded on the surface of oxides, the property of Fe(III)-Cr(III) mixed oxide would have great influence on the O2 evolution activity. It is suggested that the catalytic activity that Fe2-xCrxO3possessed for water oxidation is dropped by increasing the Cr ratio. Electrochemical water oxidation activity using Fe2-xCrxO3/FTO electrode is investigated by controlled-potential electrolysis with gas detection and solution analysis. Faradaic efficiency of water oxidation and oxidative dissolution of Cr(III) to Cr(IV) during the electrolysis were determined by the amount of evolved O2 and dissolved Cr(IV) ion. Using Cr2O3 electrode, O2 was not detected, and the observed anodic current originated from oxidative dissolution of Cr(III). On the other hand, Fe2O3 electrode showed nearly 100% Faradaic efficiency for water oxidation, producing evolution of 0.2 μmol O2 after 50 min of electrolysis. In the case of Fe0.7Cr1.3O3 and Fe1.6Cr0.4O3, the amount of evolved O2 was improved about 5 times relative to Fe2O3, although Cr dissolution occurred to some extent (10–30% efficiencies). These results indicate that the activity of electrochemical water oxidation is improved by Cr substitution, although Cr dissolution occurred at the same time. Electrochemical impedance spectroscopy indicated that the promotional effect achieved by the Cr substitution resulted from improved charge transfer inside Fe2–xCrxO3. We believe that this conclusion may be applied to nanoparticle-based photocatalytic overall water splitting system, where Fe2–xCrxO3 nanoparticles were employed as water oxidation cocatalysts. 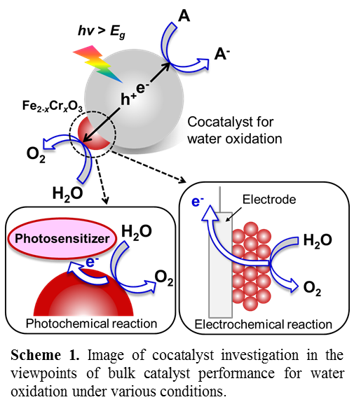