Camellia 2 (Gaylord National Resort and Convention Center)
M. Ueyama, C. Tsukioka, Y. Hoshi, I. Shitanda, M. Itagaki (Tokyo University of Science), S. Takata, and T. Kogure (Toyota Motor Corporation)
Nowadays, metal separators have been used for automotive polymer electrolyte fuel cell (PEFC). Stainless steel (SUS) is one of the suitable materials for metal separators [1]. However, localized corrosion could occur due to the potential change during PEFC operations because stainless steel as a separator contacts with acidic solution containing small amounts of chloride and fluoride ions. It is well known that a few percent of molybdenum as an alloy element in SUS316 and SUS447 inhibits pitting corrosion. Hashimoto et al. [2] reported that molybdenum in stainless steel forms molybdenum oxy-hydroxide or molybdate on the active surface sites which are defects formed in the passive film, and this action could bring a homogeneous passive film. The present work has been carried out to discuss the protection mechanisms of molybdenum alloy element and molybdate ions for the stainless steel and to propose the theory of inhibitor development for the stainless steel separators in PEFC.

Measurements of anodic polarization curves of SUS304, SUS316 and SUS447 were carried out. The working electrode (WE) was polished with diamond paste as a pretreatment and its minimum particle size was 1 μm. After that, it was ultrasonically cleaned in methanol and distilled water. The surface area of the WE was 0.28 cm2. The counter electrode was platinum and the reference electrode was a saturated KCl/Ag/AgCl (SSE) electrode. Polarization curves were measured by scanning the working electrode potential at 100 mV min-1 from open circuit potential to 1.5 V vs. SSE. The electrolyte solution was 1 mol/dm3 H2SO4aqueous solution (pH 3) which contained 10 ppm NaCl and 30 ppm NaF. 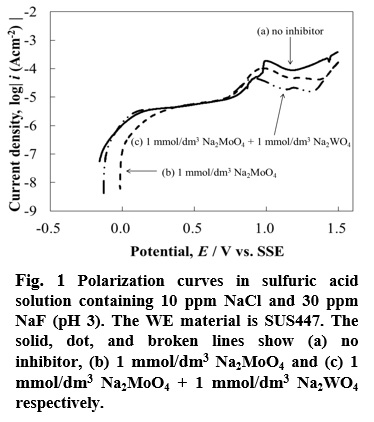