National Harbor 5 (Gaylord National Resort and Convention Center)
R. A. Carvajal-Ortiz, S. B. Lyon, M. Preuss (The University of Manchester), and A. Ambard (Electricité de France, EdF R&D)
Adventitious hydrogen uptake into engineering materials frequently occurs as a consequence of the corrosion process at cathodic sites and tends to compromise, often severely, the mechanical properties of the alloy leading particularly to reduced fracture toughness and ductility and increased brittleness. In light water reactors (LWR) oxidation of the zirconium fuel cladding, and also other reactor internal components, results in pickup of hydrogen into the metal and limits how long the cladding can remain in the reactor environment, hence limiting the efficient consumption (“burn-up”) of the nuclear fuel. The fraction of hydrogen that is picked up by the metal in service, and the rate of the hydrogen diffusion, are key factors in understanding this phenomenon. It is thus of considerable interest to have a better understanding of the kinetics of hydrogen entry and diffusion/permeation in reactor pressure vessel materials (i.e. austenitic stainless steels and nickel based alloys) and particularly fuel cladding (zirconium alloys) under realistic operating conditions.

The main purpose of this research is to adapt the well-known Devanathan-Stachurski permeation cell, to measure hydrogen diffusion at temperatures in the range 100-300°C, Figure 1. The work is divided in two stages. Firstly, an electrochemical study and selection of the candidate electrolytes, reference (RE) and counter (CE) electrodes for the oxidation and reduction compartments of the cell, within the temperature range specified above has been carried out. Secondly, hydrogen permeation measurements will be carried out in order to measure the entry kinetics and diffusion coefficient of hydrogen in reactor materials. This current report is focused on the first phase of the work.

To realise the Devanathan-Stachurski concept at higher temperatures requires the use of concentrated salt solutions, molten salts or ionic liquids. For this work two molten salt eutectic mixtures were selected: NaOH + KOH (49:51 by mass; alkaline system) and NaHSO4 + KHSO4 (47:53 by mass; acidic system). Both electrolytes rely on residual dissolved water to supply protons and, hence, a humidified argon gas flow was provided with which the electrolyte was equilibrated. Platinum was used as the counter electrode while silver was found to behave as a sufficiently stable pseudo-reference electrode under the experimental conditions. Preliminary polarization curves (Figures 2 and 3) using both molten salts are shown within the working temperature range for Zr (99.2% – i.e. commercial purity zirconium), Zr4 (Zr + 1.5% Sn, 0.3% Fe+Cr and 0.2% Fe – i.e. zircalloy 4) and 316SS (16-18%Cr, 10-14% Ni, 2-2.5% Ni – i.e. AISI 316 austenitic stainless steel). The results demonstrate cathodic kinetics consistent with hydrogen evolution and anodic kinetics consistent with passivation in both electrolytes. Although 316SS is consistently less stable (i.e. corrodes more) under anodic polarisation. The bisulphate eutectic provides better hydrogen evolution kinetics but was found to be unstable above about 250°C and so the sodium/potassium hydroxide was selected as the electrolyte of choice.

Conventionally, Devanathan-Stachurski cells operate under steady state (Fick’s 1stLaw) where the hydrogen activity is fixed on opposite sides of the permeation membrane. However in order to maximise the opportunity for detection of hydrogen given the extremely low diffusivity in zirconium, a protocol was adopted whereby the working electrode surface was first polarised into the cathodic region to evolve hydrogen then the potential was stepped into the anodic region to oxidise hydrogen. This concept is shown in figure 4.

Figure 5 shows the results of two anodic polarisation in NaOH-KOH at 250°C from which it is clear that pre-polarisation into the cathodic region to evolve hydrogen results in a higher current that can be ascribed to the presence of hydrogen in the metal. 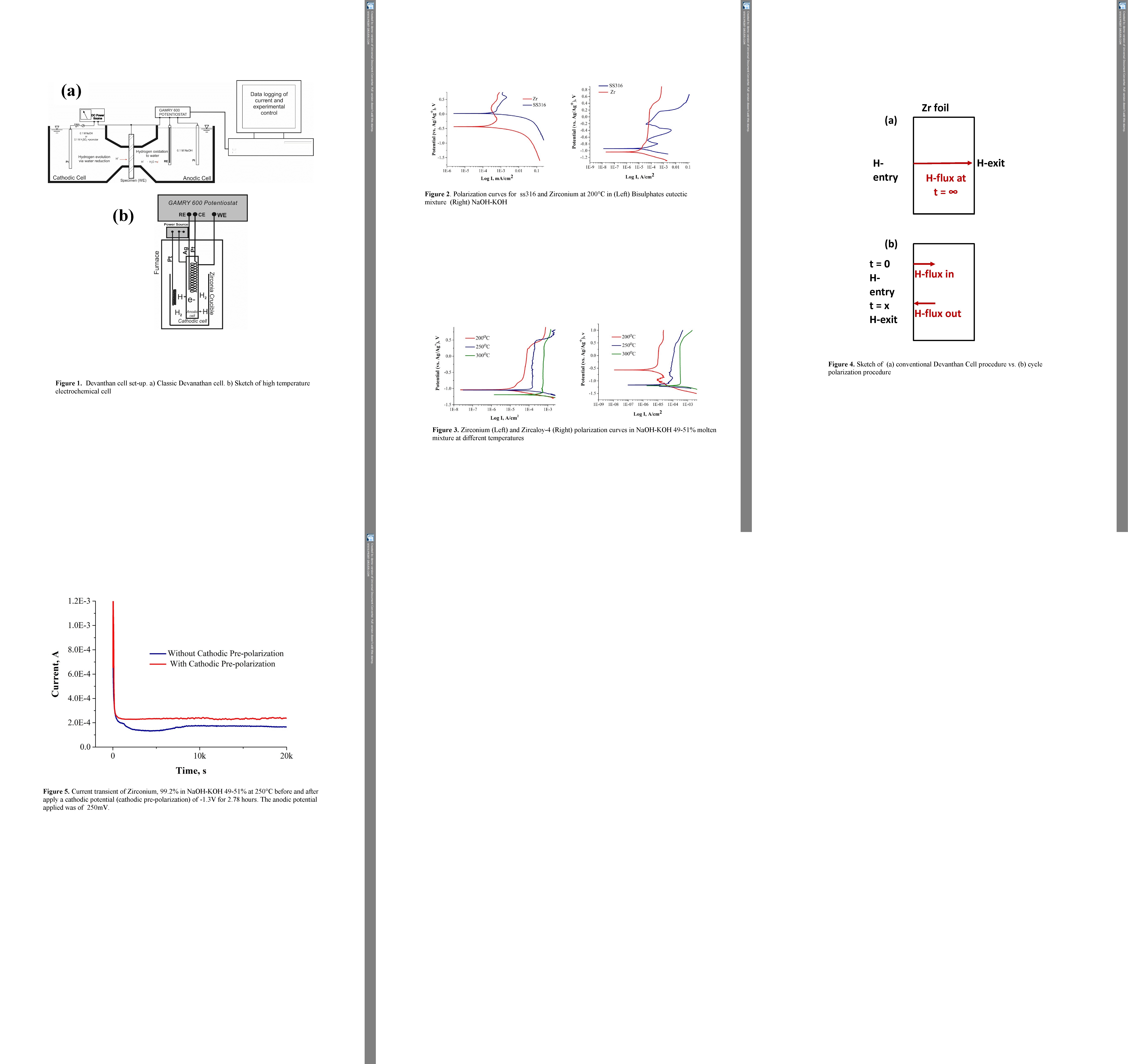