Chesapeake D (Gaylord National Resort and Convention Center)
C. F. Yang and J. G. Hwu (National Taiwan University)
The negative differential resistance (NDR) characteristic of the gated-MIS (p) structure was proposed in the previous study [1]. By varying the biasing procedure of the three terminals, the NDR behavior would change. In this work, the double NDR characteristic was formed by a special biasing technique.

The schematic top view and cross section of the substrate grounded MISIM device is shown in Figure 1. The inner circle is the main tunnel diode (I) electrode. The outer ring is the ring (R) electrode. The back contact (B) was grounded and biases of inner TD (I) and outer ring TD (R) electrodes were swept simultaneously with respect to ground with an offset of VIR. By this biasing method, the double NDR characteristic can be seen at the inner-MIS current (II) and would vary with different offset voltages (Figure 2).

Figure 3 (a) shows the currents of the three terminals of inner, ring and back contact at VIR= 1.3 V. The whole II-VIB curve can be divided into four regions by several particular VIB’s, i.e., PDR1, NDR1, PDR2 and NDR2 (Figure 3 (b)). Start from the PDR1, the four regions can be explained by VIB status as follows. The total II current can be divided in two components which are the vertical current (JV) from inner-MIS to back contact and the lateral current (JL) from inner-MIS to ring-MIS. At PDR1, the current increases as VIB becomes less negative (Figure 4 (a)). For the vertical current, the electron would inject from the inner-MIS metal which results in the negative current (JV<0) and this injection would decrease as VIB become less negative. On the perspective of the lateral current, since the voltage of inner-MIS is positive relative to ring-MIS with VIR= 1.3 V, the electrons therefore flow from ring to inner which is in the opposite direction of vertical current (JL>0). Because of the decreasing of the vertical current, the net current (J) of the inner-MIS becomes less negative and even more positive as VIB increases in the positive bias sweep direction which exhibits the PDR characteristic. When VIB exceeds the voltage near zero and becomes positive, the vertical current would remain small because of the saturated off state current characteristic of the vertical tunnel diode. Hence, the vertical current can be neglected for VIB>Vpeak1. Figure 4 (b)-(d) shows the band diagrams of the lateral directions from inner to ring of NDR1, PDR2 and NDR2 regions. The voltage bias between inner and ring is kept constant with VIR= 1.3 V, but the voltage drops of the two MIS which are determined by VIB and VRB would change as VIB changes. This brings the non-constant current of II. At NDR1, as shown in the band diagram of Figure 4 (b), because of the large negative voltage drop of ring, the ring-MIS is in accumulation region and the electric field in silicon have strong ability to attract the electron from the ring metal. Therefore, the lateral current in NDR1 is dominated by the electrons injection from ring. As VIB increases, VRB increases also (be more positive) at the same time and results in the decrease of electron injection. The current in inner therefore decreases which is the first NDR characteristic. At PDR2, VRB exceeds the flat band voltage (≈ -0.9 V) and the direction of the electric field under ring converts (Figure 4 (c)). The inversion charge emerges under ring and increases as VRB increase. Also, in this region, by Figure 3 (a), the electron injection from ring mainly flows to the back contact because of the equal large currents of back contact and the ring as observed in Figure 3 (a) as |IR| ≈ |IB|. The electron injection flow on the lateral direction is therefore small. In this situation, the lateral current in PDR2 is dominated by the coupling of the inversion charge under ring that can overcome the barrier (ФS) and reach to the inner side. Because of the increasing of the inversion charge, the lateral current increases and results in the PDR characteristics. At last, at NDR2, the current decreases again. Although the inversion charge increases as VRB increases, the barrier height (ФS) for inversion charges to flow from ring to inner also increases (Figure 4 (d)). The total electron flow would therefore decreases when the barrier is high enough. 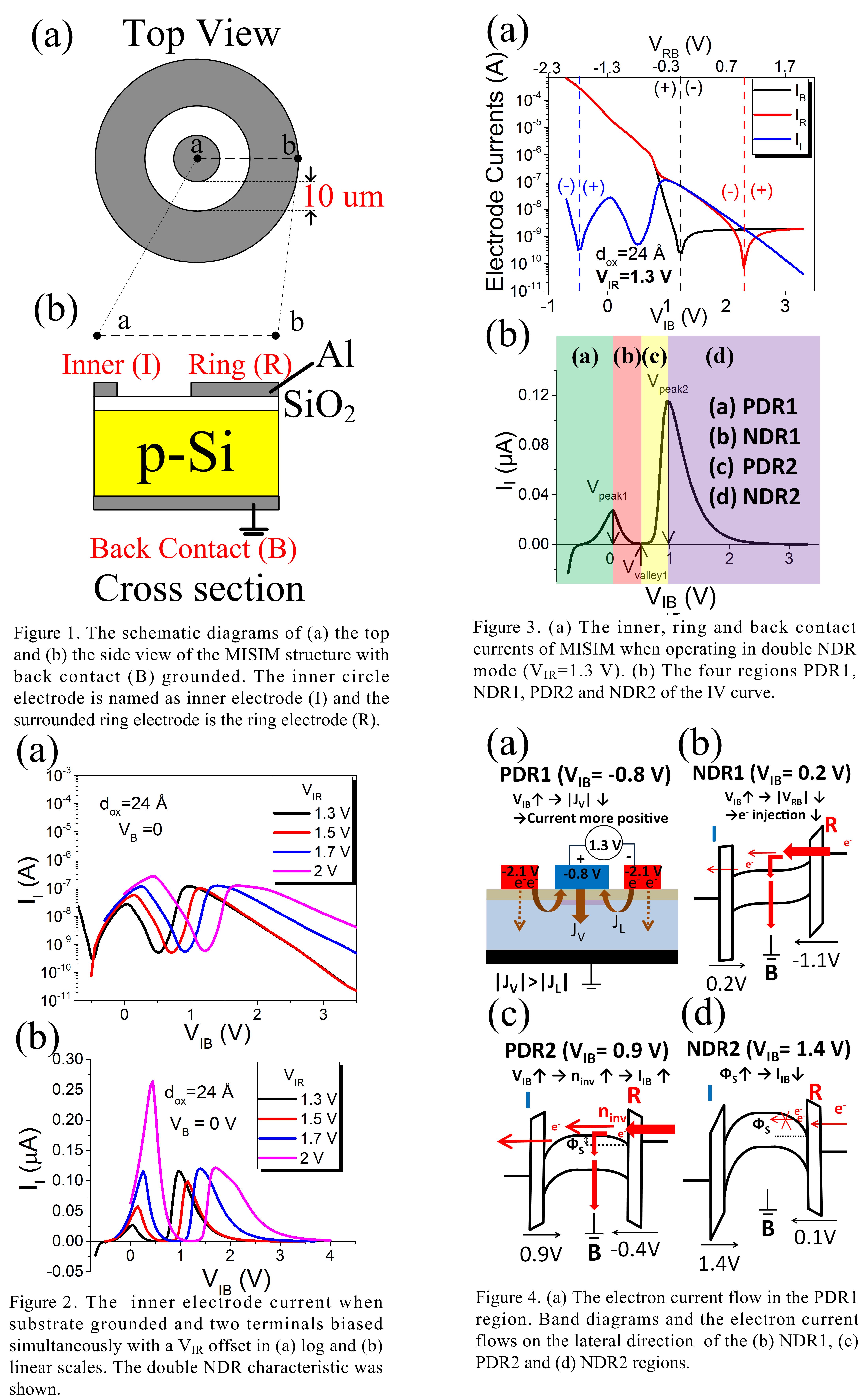