Irrespective of type or operating temperature, for all fuel cells persist the same requirements like long term stability and reproducibility.

To assemble an entire fuel cell stack, the utilized membrane electrode assemblies (MEA) should not only be the same type, they are also required to exhibit similar performances and power outputs.

Vision of the German project QUALIFIX, funded by the Ministry of Economic Affairs and Energy (SC: 03Et6046A), is the development of consistent conditions for improved batch production to analyze and monitor quality of fuel cells, systems and components. With help of defined quality standards, the lifetime of fuel cell systems should be improved and cost-intensive losses can be minimized at an early production stage.

Within QUALIFIX, the reproducibility of MEAs has been screened by evaluating several small batch series. One operation strategy, which has been used for this investigation, is load cycling between high current densities of 0.6 and
1.0 A/cm² and under equal test conditions. High temperature (HT) PEM MEAs with PBI-membranes of four different providers have been tested and their results will be presented in this work.

All MEAs passed identical break-in procedures and activation phase under 0.3 A/cm². These start time intervals lasted 48 hours for each MEA respectively followed by initial characterization including polarization curves, impedance spectroscopy, cyclic and linear sweep voltammetry. Afterwards the load cycling operation started with
16 min of 1.0 A/cm² followed by 4 min of 0.6 A/cm². At the end of tests (EoT), after 500 h of operation, a second complete characterization has been performed. The characterizations have been replenished by ante- and post-mortem analysis via micro-computed tomography (µ-CT) and by product water and MEA analysis to provide phosphoric acid concentration changes.

Table 1: Degradation rates at 0.3 A/cm² of load cycling tests after 500 h of operation.

In addition, another MEA of the batches of MEA B and D have been adducted for inner-batch evaluations and comparisons. For both MEA-types (two different providers), the degradation rates vary within the batches of identical assemblies and under same operation conditions of load cycling at high current densities.

Hence the production of MEAs with reproducible performances seem to be still of major concern.

The in-situ electrochemical and ex-situ post- and ante-mortem evaluation (e.g. MEA acid content and µ-CT investigations) of all tested MEAs will be presented and compared. 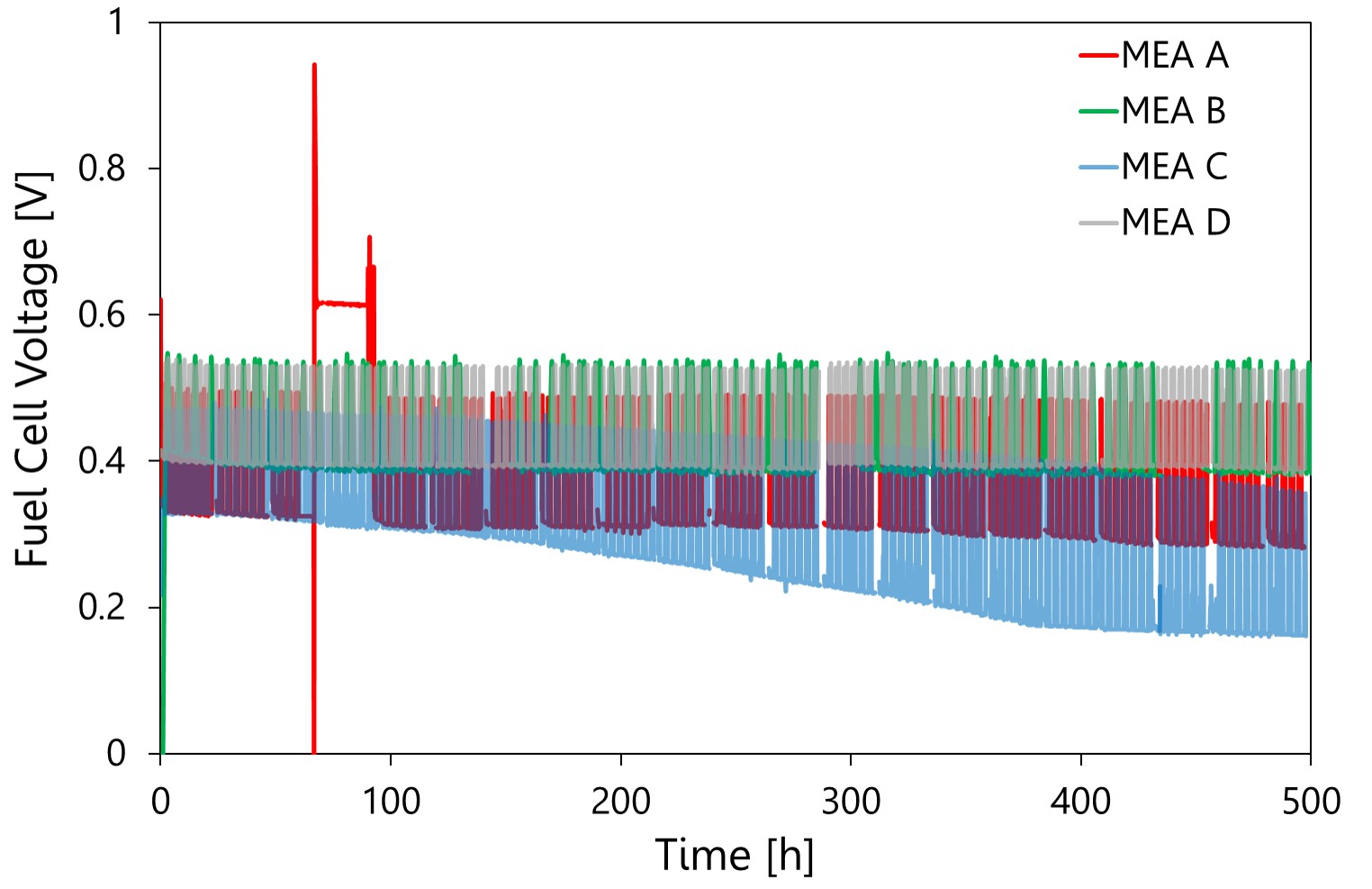