Maryland A (Gaylord National Resort and Convention Center)
V. Tullius, M. Rastedt, J. Büsselmann (NEXT ENERGY • EWE Research Centre for Energy Technology), D. Schonvogel (DLR Institute of Networked Energy Systems), N. Pilinski (NEXT ENERGY • EWE Research Centre for Energy Technology), P. Wagner, and A. Dyck (DLR Institute of Networked Energy Systems)
The emphasis of this study is the investigation of high-temperature polymer electrolyte membrane fuel cells (HT-PEMFC) of various manufacturers with simulated start-stop cycles. This study is part of the national project QUALIFIX, which is funded by the German Ministry of Economy and Energy. Its purpose is to develop a framework to log, revise and improve the quality of fuel cells, its system components, as well as its manufacturing chain. Coherent test procedures enable the comparability of single fuel cells of various manufacturers. Furthermore, these framework conditions should enhance the lifetime of fuel cells, as well as minimize the production costs in an early stage.

In this study all tested membrane electrode assemblies (MEAs) have been investigated under identical test conditions using simulated Start-Stop (S/S) cycles. Consequently, the MEAs have been started up under defined conditions and operated for twelve hours at a constant current density of 0.3 A/cm². Following this, the MEAs have been shut down for another twelve hours and have been allowed to cool down to room temperature. Furthermore, all MEAs have been held under a nitrogen atmosphere at 30 °C during the stop phases before the next startup procedure has been performed. Figure one presents the fuel cell voltage at 0.3 A/cm² as function of time for one examinee after 500 h, correlating to 21 S/S cycles.

As a result, a continuous cell degradation rate of -33 µV/h could be observed. Next, degradation for HT-PEMFC MEAs have been evaluated by an extensive in situ electrochemical characterization, which has been executed before and after 21 S/S cycles. This characterization includes among the voltage curve, electrochemical impedance spectra, cyclic as well as linear sweep voltammetry. Additionally, all MEAs have been analyzed through ex situ characterizations, including, among others, micro computed tomography
(µ-CT), analysis of product water via ion chromatography (IC), as well as the determination of the phosphoric acid content, once S/S cycling has been stopped. Simultaneously, fresh MEAs of the same batch have been tested with the same ex situ methods. This allows to determine the ‘begin of life’ (BoL) condition in a pristine state.

As mentioned above, an unprecedented benchmarking of MEAs of various manufacturers has been performed with respect to HT-PEMFC degradation. Moreover, the results will be compared to the ex situ findings of the BoL-Analysis.

Figure 1: Voltage as function of time of one MEA under start stop cycles for 500 hours 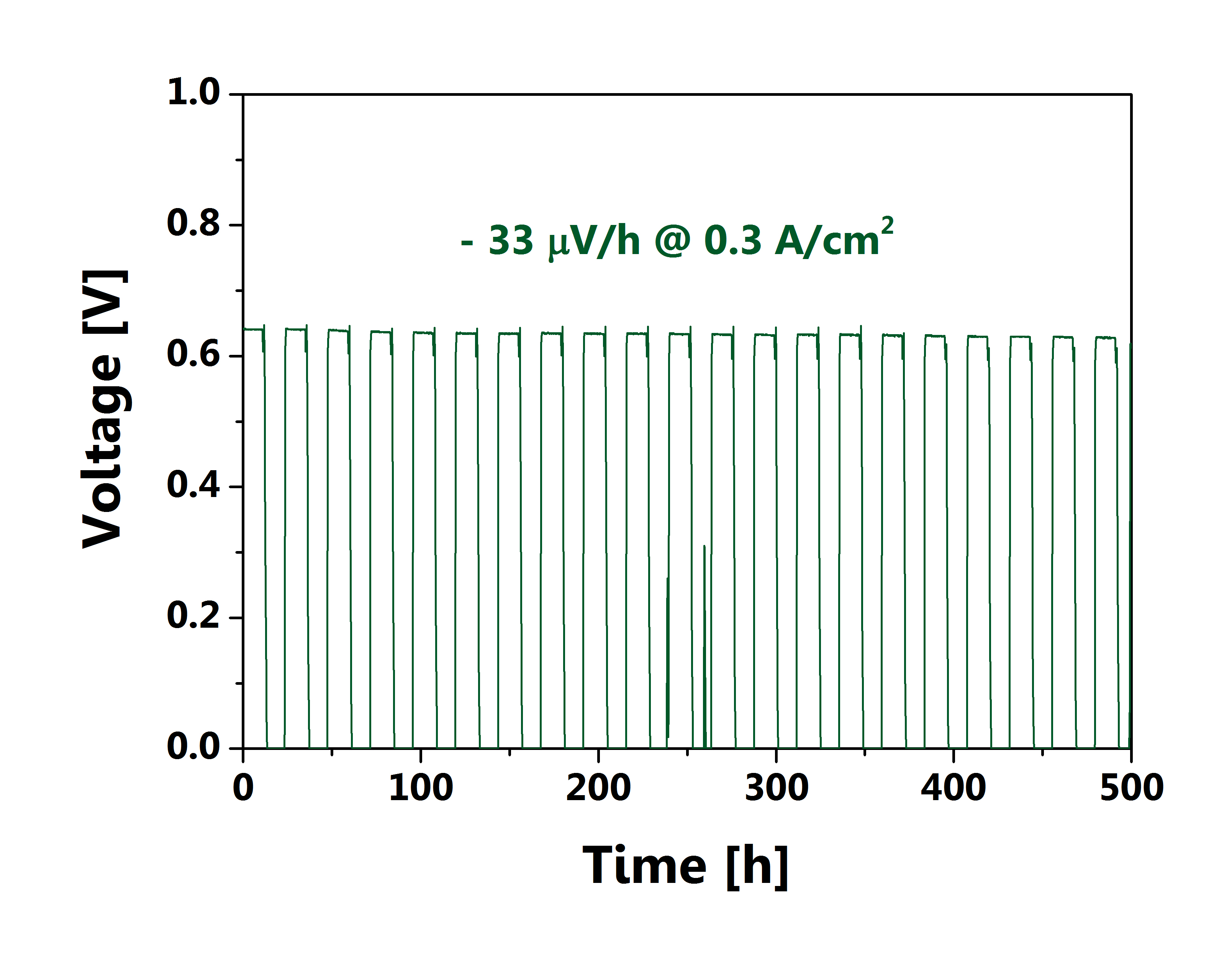