Maryland A (Gaylord National Resort and Convention Center)
M. A. Schmid, S. Galbiati, N. Bevilacqua, S. Schindler (KIT, Helmholtz Institute Ulm), M. A. Danzer (ZSW Baden-Wuerttemberg, University of Bayreuth), J. Kaczerowski (ZSW Baden-Wuerttemberg), and R. Zeis (KIT, Helmholtz Institute Ulm, Institute of Physical Chemistry)
High temperature proton exchange membrane fuel cells (HT-PEMFCs) based on phosphoric acid doped polybenzimidazole operate at a temperature range between 140°C and 200°C. Due to their high operating temperature, HT-PEMFCs can tolerate a relatively high concentration of impurities in the anodic fuel stream. This makes HT-PEMFCs suitable for stationary applications where hydrogen is generated on site by steam reforming of hydrocarbons such as methane or oil derivatives. In particular, the preferential oxidation stage (PROX), which is typically required to reduce the CO concentration to ≈10 ppm after the reforming and water gas shift (WGS) reactors, is no longer necessary. Thus, fuel treatment units are simpler and cheaper with HT-PEMFCs [1].

The proven robustness of HT-PEMFCs against fuel impurities has recently attracted interest to operate the HT-PEMFC as a ‘hydrogen pump’ for hydrogen purification applications. In this configuration, a hydrogen rich gas stream is supplied to the cell’s anode compartment and a current is externally applied through the cell. Different from a typical fuel cell, no oxygen is supplied on the cathode side. During this process, hydrogen is electrochemically ‘pumped’ from the anode to the cathode in the form of protons through the electrolyte membrane. The ‘pump effect’ is highly selective and a pure hydrogen stream is obtained at the cathode outlet of the cell (≈10 ppm). Compared with low temperature Nafion based fuel cells, HT-PEMFCs are much more promising for purification of hydrogen streams that contain considerable amounts of impurities, as proven by preliminary studies [2, 3].

In this work, an investigation of the HT-PEMFC operated as an electrochemical hydrogen pump is carried out. The impact of hydrogen dilution and CO poisoning is studied as well as the effects of hydrogen stoichiometry, gas humidification, and electrolyte resistance. The cell is characterized with various techniques including polarization curves, electrochemical impedance spectra (EIS), and distribution of relaxation times (DRT) analysis (Fig. 1). Complementary to the equivalent circuit approach, DRT maps the EIS data to a function that contains the characteristic time scales of the system [4].

These results are important for the assessment of the HT-PEMFC’s potential for hydrogen purification. Although this application is distinctly different from that of a typical fuel cell, the electrochemical process at the anode is actually the same as in a normal HT-PEMFC. Therefore, the study also helps us gain valuable insight into the hydrogen oxidation reaction process in the presence of impurities. 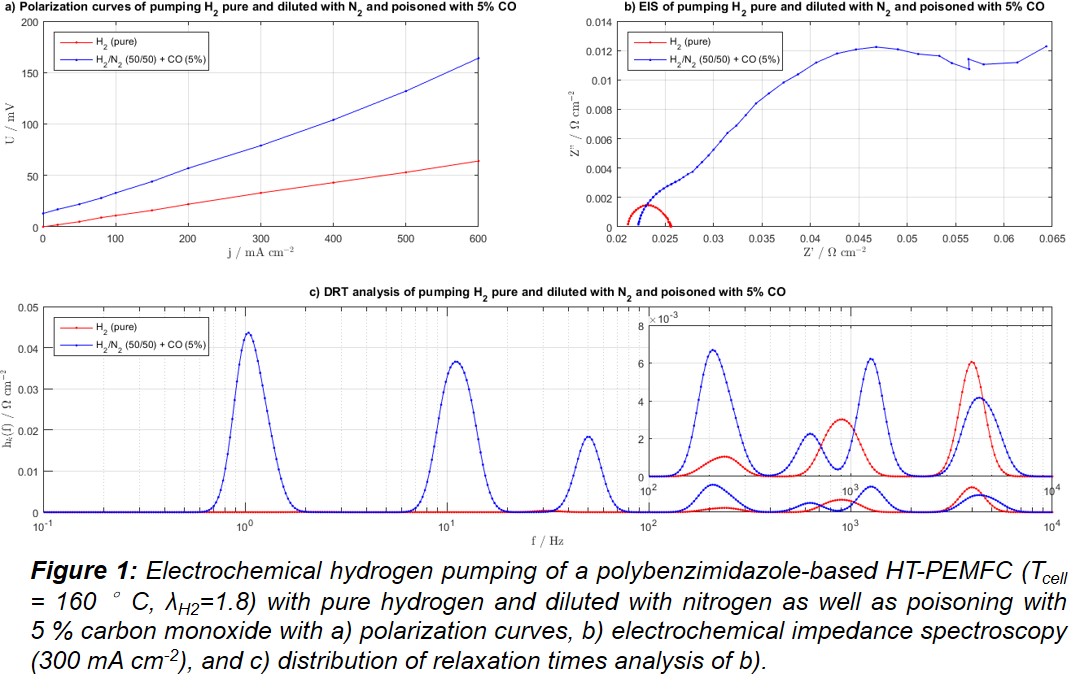