The HER and HOR on Pt and other catalysts is facile at low pH, however, reaction rates are found to be several orders of magnitude slower in alkaline electrolytes3. The explanation for this unusual pH dependence has been a matter of debate within the scientific community. Here we provide insight into the mechanistic shift in the HER/HOR reaction progression with increasing pH through a systematic study of well-defined single crystal interfaces.

Traditionally, hydrogen binding energy (HBE) has been used as the lone activity descriptor, independent of electrolyte pH. This alone, however, is not sufficient to describe the pH dependence of the HER/HOR activity on metals other than Pt. Experimental evidence suggests that the low activity in alkaline electrolyte, particularly for the HER, is due to a shift in the source of atomic hydrogen with increasing pH, moving from H3O+ to H2O, resulting in a higher activation barrier for formation of the adsorbed atomic hydrogen intermediate4,5.

Introducing bifunctionality into a catalyst is a potential strategy to overcome the enhanced barrier for intermediate formation at alkaline pH. Doping the surface with oxophilic species can drive the formation of adsorbed hydroxyl that actively participate in the hydrogen reaction progression either through aiding the dissociation of water for the HER or driving the evolution of water, completing the HOR. To gain better insight into this proposed bifunctional mechanism, we have modified well defined platinum surfaces (single crystal and polycrystalline) with intentionally doped transition metal oxides/hydroxy-oxides having varying oxophilicity. The modified and unmodified platinum surfaces were assessed for their HER/HOR activity in alkaline electrolytes with different alkali cations, K+ and Li+, to further probe the efficacy of a hydroxyl mediated reaction pathway. It has been hypothesized that the higher hydration energy of Li+, as compared to K+, leads to a higher degree of OHad surface coverage at a given potential. This higher surface coverage is the result of an enhanced hydroxyl adsorption free energy due to the interaction of the OHad with the hydration shell of the alkali metal cation6,7. Analysis of these surfaces will provide deeper insight into the role of OHad and water in the HER/HOR mechanism at alkaline pH.

The HER/HOR polarization curves shown in Fig. 1, in agreement with previous results8, demonstrates that the HER activity trends with the oxophilicity of the dopant species, propagating the bifunctional mechanism, following the order Pt (111) < Pt (111) + Mn(OH)2 < Pt (111) + Co(OH)2 < Pt (111) + Pt adislands < Pt (111) + Ni(OH)2. It is observed, however, that these dopant species, other than Pt adislands, have a negligible effect on the HOR. This may be related to the potential dependence of the adsorption free energy of OHad on these hydroxyl-oxide dopant species, where at HOR relevant potentials, the binding is too strong, preventing OHad from participating in the Volmer reaction of the HOR mechanism.

We have assessed the viability and progression of the bifunctional mechanism for the alkaline HER/HOR and developed structure-property-function relations using variable dopant species, Fig. 1, as well as different alkali cations, Fig. 2, in combination with microkinetic modeling to further elucidate the effect of OHad on the reaction rate. This work will first confirm the mechanism of HOR and HER in base, and then provide insight to develop electrocatalysts having an optimal oxophilicity and coverage for the reversible hydrogen reactions. 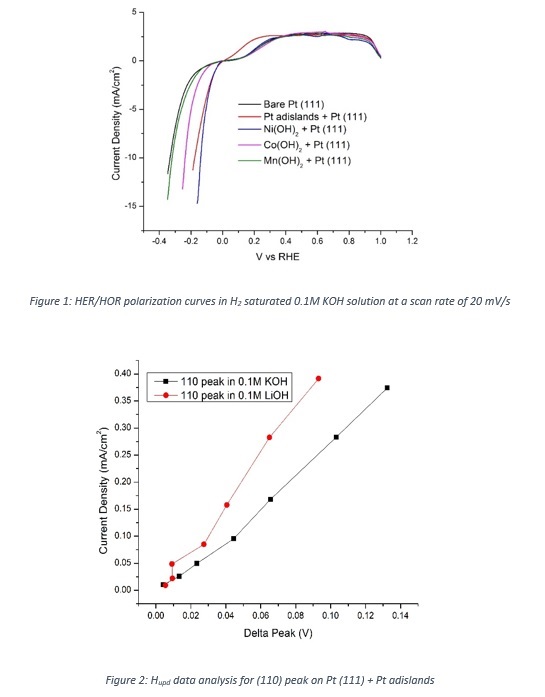