Chesapeake D (Gaylord National Resort and Convention Center)
O. Engström (University of Siegen, AMO GmbH), M. C. Lemme (AMO GmbH, RWTH Aachen University), and O. Habibpour (Chalmers University of Technology)
The use of graphene as a material for metal-oxide-graphene field-effect transistors (MOGFETs) is a possible overture to an epoch of faster electronics with properties similar to the traditional MOSFET, yet including interesting novel restrictions and possibilities [1]. This is apparent for the gate capacitor, where a two-dimensional graphene layer, constituting the transistor channel, is in intimate contact with a high-k oxide under a gate metal. Thermal activation of trapped charge carriers from interface states and border traps into the energy bands is a common feature of oxide-semiconductor systems. In contrast, due to the lack of an energy bandgap in monolayer graphene, the transfer of charge carriers in oxide traps into states of the channel material takes place as tunneling processes, serving the electron and hole exchange.

In the paper, a background is given for modelling capacitance versus voltage data for MOG capacitors and transfer characteristics for MOGFETs. The derivation is founded on the position of the Fermi-level in the graphene layer, which determines all dynamic charge in the system at thermal equilibrium. In the first step, C-V and transfer characteristics for structures with oxides, comprising single electron trap states, will be given. This includes the dependence on temperature and on the frequency used for the probing signal of the capacitance meter.

For high-k oxides, the dominating trap constellations consist of oxygen vacancies with varying atomic geometries, depending on the number of occupying carriers. Capturing charge carriers into electron and hole states in the core of the trap volume, the bonds between the surrounding atoms may change character. Accordingly, when an electron is captured into such traps, the (free) energy exchange in the transfer sequence not merely includes electron energy, but also the change in lattice energy needed for the process. Besides the energy carried by the charge carrier from the “sheet of electrons” in the graphene, also mechanical energy is required to change the atomic part of the trap assembly. This latter quantity is supplied by local phonons within the trap volume [2]. Converting the atomic arrangement when turning from one electronic state to another thus includes local vibrational energy, which requires thermal activation for the atomic transition. Therefore, the emission and capture rates for transitions between the oxide traps and the graphene are limited by a combination of the tunneling between electron states and the change in atomic arrangement. An example for a single electron trap is shown in Fig. 1, depicting the electron tunneling transition from graphene into the electron state E1 for a trap able to capture one electron. Simultaneously, this requires a transition of the atomic vibrational states from Osc. 0 to Osc. 1, which includes thermal activation to the crossing point between these energy potentials, and thus an atomic energy exchange of U0as noted in the figure.

The discussion will be further extended to multiple electron traps, where we find that thermal activation occurs as a stepping process between atomic potentials, depending on internal vibrational excitations of the atoms surrounding the electronic trap state. It will be demonstrated that the emission and capture rates of charge carriers may depend on the ramping direction of the gate voltage in a measurement cycle, which gives rise to specific hysteresis effects for traps with atomic relaxation properties.

Finally, single traps positioned close to the graphene layer may create electrical potential variations (“puddles”) along the channel [3]. This will locally change the position of the Fermi-level in the graphene, generate a varying energy position of the graphene Dirac-point and influence the shape of C-V and transfer curves. 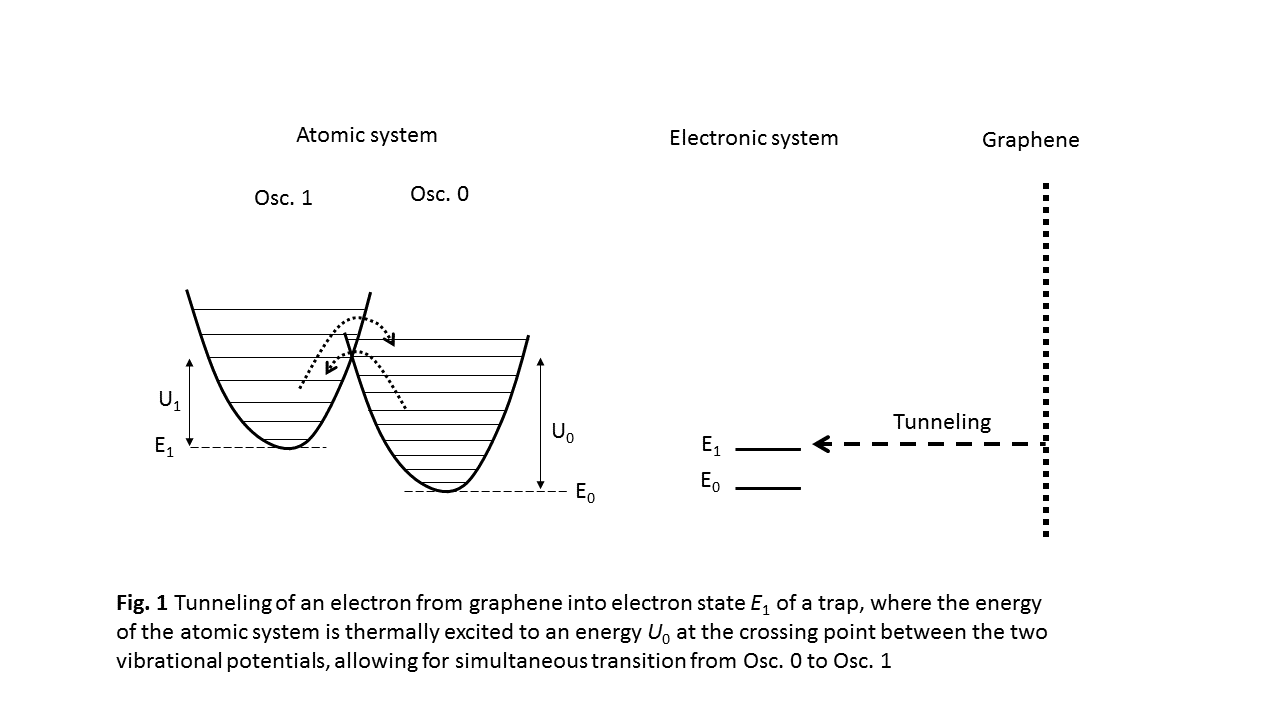