Maryland A (Gaylord National Resort and Convention Center)
H. Ishikawa (Panasonic corporation), Y. Sugawara (Panasonic Corporation), and M. Uchida (Fuel Cell Nanomaterials Center, University of Yamanashi)
Polymer electrolyte fuel cells (PEFCs) have attracted much attention as power sources for automobiles and stationary cogeneration systems. For further cost reduction of PEFCs, it is necessary to optimize catalyst layer (CL) structure to reduce Pt loadings. The CL is a porous structure typically consisting of Pt, carbon, ionomer, and pores, and needs to effectively form conductive pathways for electrons, H+, and gas to the surface of the Pt catalyst. However, even with state-of-the-art techniques1), the CL structure has not yet been optimized, because it remains difficult to modify flexibly the morphologies and to analyze them accurately due to the heterogeneous nanoscale structure. In particular, effects of CL fabrication processes such as spraying, bar coating, and freeze drying of catalyst ink on the morphology of CL have not been sufficiently investigated2). Hence, this research focuses on the modeling and analyses of the morphology of CLs by use of computational techniques3). Three types of different fabrication processes are modelled and compared with each other. The model CLs are characterized numerically by analyzing the morphologies with a newly developed algorithm. From the results, the effects of CL structures on the cell performance and overvoltages are discussed.

CL Modeling process: First, 100 types of carbon aggregates were designed by connecting 25 primary particles, each of which is a perfect sphere 30 nm in diameter. The aggregates are randomly chosen and packed in the analysis domain (600 nm × 600 nm × 1.2 um) at a space resolution of 2 nm, until the total volume fraction of carbon reaches 0.5. In this process, three types of filling methods were prepared (Fig. 1a). In the 3D random filling model, aggregates were placed in 3D random positions. In the accumulated model, aggregates were accumulated from bottom to top of the analysis domain. In the arranged model, aggregates were placed from the bottom edge and lined up from bottom to top. After fabrication of the carbon structure, 4 nm Pt particles were loaded on the carbon surface until the Pt loading was equivalent to 0.3 mg/cm2 at a Pt/carbon weight ratio of 1.0, and ionomer was covered on the surface of both Pt and carbon until the ionomer/carbon weight ratio was equivalent to 1.0. The CL morphologies such as pore size distributions (PSDs), Pt inter-particle distances, ionomer coating thickness distributions, ionomer coverage on the Pt surface, and tortuosity of pore, ionomer, and carbon were measured by the computational algorithm.

Results: Fig. 1 shows the fabrication processes and model CLs in each filling method. Fig. 2 and Fig. 3 show the PSDs and tortuosity of pore, carbon, and ionomer in each model. In the 3D random filling, the mean pore size was 58 nm and the tortuosities of pore, carbon, and ionomer were 2.3, 7.3, and 6.5, respectively. The CL structure appears sparse, and the mean ionomer covering-thickness was lower than those of the accumulated CL and the arranged CL. As the result, the pore tortuosity was lower and both carbon and ionomer tortuosity were higher than those of the other CLs and indicated higher O2 diffusivity and lower conductivity of H+ and electron. In the accumulated model, larger pores (> 100 nm) were probably formed due to a steric hindrance effect of the accumulated aggregates. In the arranged model, the CL structure appears dense, and the mean pore size was lower than the others. Accordingly, the pore tortuosity of the arranged CL was higher, and both carbon and ionomer tortuosity were lower than the others, assuming higher conductivity of H+ and electrons and lower O2 diffusivity. These results indicate that the fabrication process has a significantly influence on the CL morphologies, and there are trade-off relationships between H+, electrons, and O2 diffusion in each structure. In order to balance these parameters, further CL models, such as oriented pillars and cubic frames, have been developed and their characteristics discussed.

This work was partially supported by funds for the “Superlative, Stable, and Scalable Performance Fuel Cell (SPer-FC)” Project from the New Energy and Industrial Technology Development Organization (NEDO) of Japan. 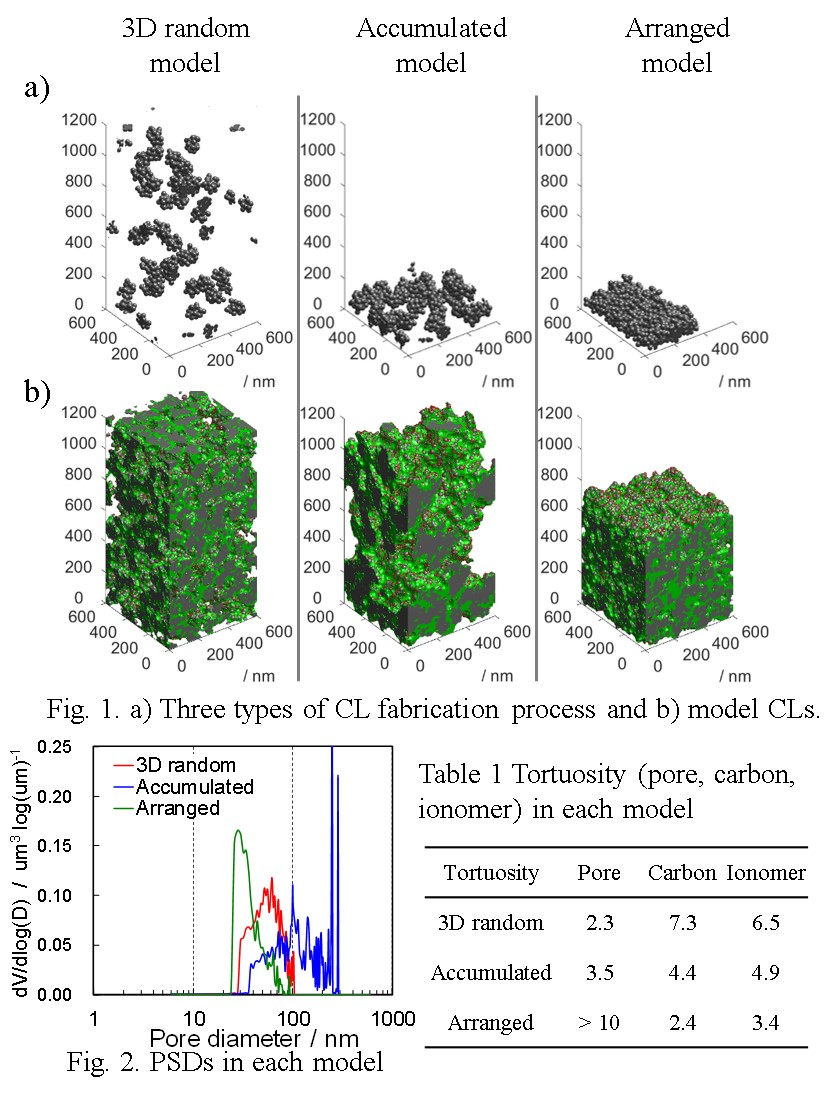