National Harbor 14 (Gaylord National Resort and Convention Center)
J. Yu, S. Kikuchi, H. P. Peediyakkal, H. Munakata, and K. Kanamura (Tokyo Metropolitan University)
Polymer electrolyte fuel cells (PEFCs) have received more and more attention due to their high energy conversion efficiency and low emissions. Moreover, PEFCs have been used in wide range of applications, such as clean power generation systems for households and vehicles. Perfluorosulfonic acid (PFSA) polymers, such as Dupont’s Nafion®1have been used as electrolyte membranes in PEFCs for decades due to their high proton conductivity, excellent chemical stability and superior durability. However, the membranes require water to retain high proton conductivity, which limits the operating temperature to be below 100 °C, and needs a large humidification system. In order to realize more compact PEFC systems, new electrolytes applicable to intermediate temperature (IT), above 150 ºC, without humidification are needed. Under these conditions, phosphoric acid fuel cell (PAFC) has been applied, but the dehydration condensation of phosphoric acid (PA) still remains as a big problem to diminish its stable operation. Ionic liquids (ILs) have unique properties such as high ionic conductivity, high thermal stability, wide electrochemical potential window and non-volatility. Thus, they have been focused as candidate electrolytes for intermediate temperature fuel cells. In this study, we aimed to achieve the non-humidified intermediate temperature fuel cell by using 3-dimensionally ordered macroporous polyimide (3 DOM PI)/diethylmethylammonium trifluoromethanesulfonate (Dema-TfO)/phosphoric acid (PA) composite membrane. Dema-TfO was synthesized by direct neutralization of the N,N-diethylmethylamine and trifluoromethanesulfonic acid with 1 : 1 molar ratio followed by vacuum drying at 100 °C for 48 h, as a protic IL to prepare the composite membrane. Dema-TfO was added with different ratios of PA. 3 DOM PI was fabricated by using previous method2. 3 DOM PI/Dema-TfO/PA composite electrolyte membrane was then prepared by immersion of 3 DOM PI into the mixture of Dema-TfO and PA under vacuum at 100 °C.

Figure 1 showed TG curves for the Dema-TfO/PA mixture. For comparison, the TG curves of Dema-TfO and PA were also provided. It was confirmed that Dema-TfO was thermally stable to 230 ℃. At 180 ℃, which is a target temperature of FC operation, the weight loss ratio of PA was as high as 6%. However, when the mixture was considered, 50 wt% PA in mixture, the loss weight ratio was same with the value of Dema-TfO which was less than 1.5%. Also the detection of 3 DOM PI/Dema-TfO/PA composite membrane showed thermally stable at 180 ℃. The thermally stable property indicated that interaction of mixture suppressed PA dehydration.

The mechanism of interaction was explained by FT-IR and NMR analysis. From FT-IR results, the [P(OH)2] antisymmetric stretching in PA and the SO2 symmetric stretching in Dema-TfO showed peak shift when the two functional groups were in the Dema-TfO/PA mixture. On the other hand, in H1 NMR analysis of Dema-TfO/PA mixture, both of the weakened O-H bond in PA and enhanced N-H bond in Dema-TfO compared with pure PA and Dema-TfO could be explained by the interactions existing between phosphate groups and sulfonic groups from TfO-which were the same explanation with the FT-IR results.

This research was supported by “Platform for Technology and Industry” of Tokyo Metropolitan Government. 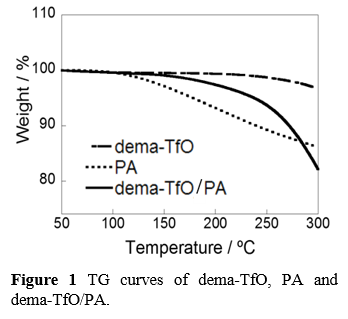