Lithium air secondary batteries (LABs) have attracted attention due to their high theoretical energy density. One of the major problems is their poor cycle characteristics, which is caused by the decomposition of electrolytes, the strength degradation of air electrodes, and so on. These are related to the large resistivity of discharge products Li2O2 deposited in the air electrodes. To solve these problems, the air electrodes of LABs have been developed by using various catalysts [1]. However, the catalysts become inactivated gradually after a large number of cycles because undecomposed Li2O2 remains on the active catalytic sites in the air electrodes even after charging processes [2]. Since additives are dissolved in an electrolyte solution, they were predicted to promote the deposition and the decomposition of Li2O2 without deactivation due to the undecomposed Li2O2. The additives are expected to overcome the problems associated with the catalyst for the air electrode. We are focusing on (R,R)-(-)-N,N-Bis(3,5-di-tert-butylsalicylidene)-1,2-cyclohexanediaminomanganese(III) chloride (MnSl) as an electrolyte additive. In our previous work, the LAB cells with 1 mol/l LiTFSA/TEGDME containing 2 wt% MnSl exhibited large first discharge capacity of 4903 mAh/g and good cycle retention of 61% at the 10th cycle [3]. However, the details of the reaction mechanisms were still unclear. In this study, we investigated the fundamental mechanisms by evaluating the electrochemical activities for the oxygen reduction reaction (ORR) and oxygen evolution reaction (OER) in an electrolyte containing 0.005 wt% MnSl additives.

A 0.005 wt% of MnSl (Sigma-Aldrich) vacuum-dried at 90°C for 12 h was added to 1.0 mol/l LiTFSA/TEGDME. Ketjenblack EC-600JD (KB, 80 wt%) and polyvinylidene difluoride (PVdF, 20 wt%) coated on carbon paper (Toray, TGP-H-120) were used as an air electrode. A Li metal sheet was used as a counter electrode. These components were installed in a commercial two-electrode LAB cell (ECC-Air, EL-Cell GmbH). Electrochemical experiments were performed at a current density of 200 mA/g under dry air atmosphere with a dew point of less than -50°C. Cyclic voltammetry was performed at a scan rate of 100 mV/s under O2atmosphere using the three-electrode ECC-Air cell. Platinum disks were used as working and counter electrodes. A Li metal was used as a reference electrode.

Electrochemical measurements were carried out to investigate how the MnSl additives work in the electrolyte solution during ORR/OER processes. Figure 2 shows cyclic voltammograms (CVs) of the three–electrode cells without and with MnSl under O2 atmosphere. The cells without and with MnSl show a cathodic ORR peak at around 2.0 V and an anodic OER peak at around 4.4 V. The cell with MnSl shows higher current densities in the whole potential range than the cell without MnSl. In the cell with MnSl, the cathodic peak around 2.0 V for the ORR becomes larger, and the onset of that peak shifts significantly toward more positive potential. This might indicate that MnSl promoted the electrochemical activity for ORR. As a result, the average discharge voltage of the cell with MnSl becomes higher compared with the cell without MnSl, as shown in Fig. 1. In the cell with MnSl, the anodic peak for the OER also becomes larger compared with the cell without MnSl and exhibits a new peak at around 4.0 V. This peak was not observed in the CV result for the cell without MnSl. This might indicate that the MnSl interacted with Li2O2at around 4.0 V and such an interaction promoted the activities for OER at around 4.4 V The plateau voltage around 4.0 V shown in Fig. 1 might reflect the electrochemical behavior for the anodic process in the CV result of Fig. 2. Consequently, these results show a tendency similar to the charge and discharge properties shown in Fig. 1 indicating the effectiveness of MnSl as an electrolyte additive. 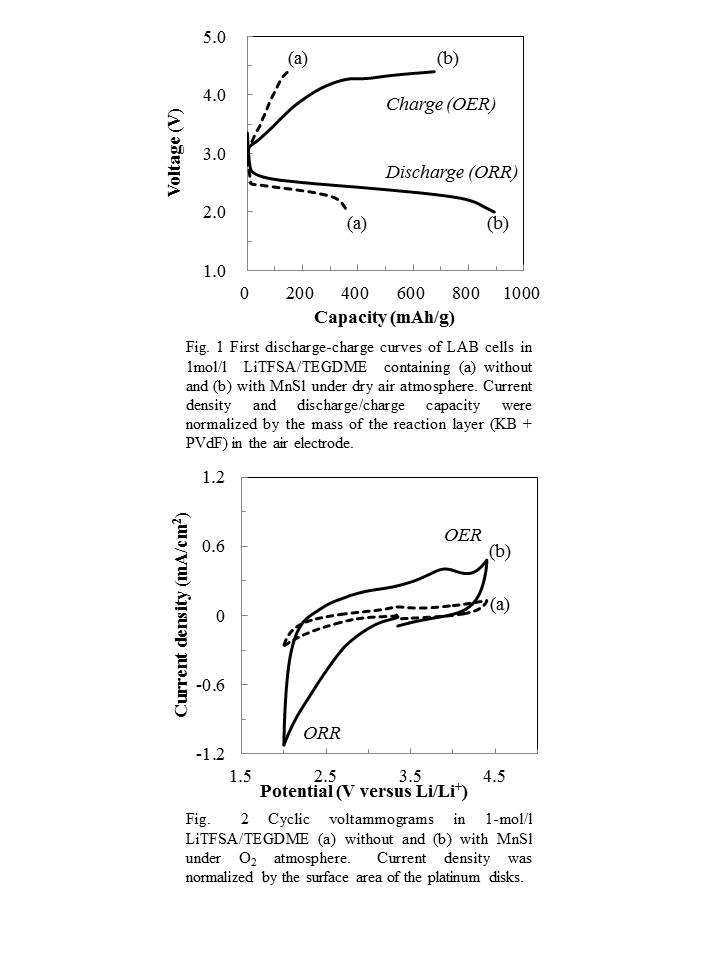