Prince George's Exhibit Hall D/E (Gaylord National Resort and Convention Center)
M. Muto, K. Sasaki, and A. Hayashi (Kyushu University)
Introduction Hydrogen production from water electrolysis and further electricity generation through fuel cells have been focused on as one of the efficient uses of renewable energy. Regarding to water electrolysis, the PEM type water electrolyzer is attractive in terms of reduced ohmic resistance and also a similar assembly to well-developed PEFCs. On the other hand, the relatively low active surface area of anode electrocatalysts is a problem since carbon supports are not usable in order to disperse small catalyst particles under the high potential condition over 1.5 V. So far, our group has been working on mesoporous materials for PEFCs. We have found that mesoporous materials can keep those porous structures even after being built into the device, and then, the porous structure can improve the mass transfer within catalyst layers. Based on the similar idea used in our PEFC studies, we propose development of carbon-free mesoporous metal catalysts with high active surface area to increase the efficiency of water electrolyzer. In this study, mesoporous Pt and Ir materials were particularly developed and further evaluated as anode electrocatalysts.

Similar to the synthesis of mesoporous carbon,1 a surfactant, Pluronic F127, was used as a template to form a porous structure. Pt(acac)2 and Ir(acac)3 were used as metal precursors. After mixing the surfactant and metal precursors, the resultant complex was slowly heated up in N2or Air atmosphere to make the mesoporous structure. After the basic material characterizations, their electrochemical measurements were performed using a common half-cell setup in the solution. Oxygen evolution reaction (OER) activity was evaluated as anode electrocatalysts. The durability against high potential like 1.8 V was also analyzed.

The resulting Pt material was confirmed to have a porous structure constructed by aggregation of Pt nanoparticles as shown in Figure 1. Based on the nitrogen sorption measurement, the randomly oriented porous structure was also confirmed, and the pore diameter was found mostly smaller than 100 nm. With this porous Pt material, OER activity was evaluated and compared with a standard Pt/KB electrocatalyst, TEC10E50E. As shown in Figure 2, the initial activity resulted in the same even though ECSA was six times higher for Pt/KB. Then, the durability of porous Pt and Pt/KB was examined by applying continuous high potential of 1.8 V. Dot lines in Figure 2 shows the OER activity after 10 minutes of holding at 1.8 V．As expected, Pt/KB lost most of OER activity owing to carbon corrosion. Consequently, carbon-free porous Pt electrocatalyst was successfully prepared and its high activity and durability was confirmed. Similarly, porous Ir electrocatalyst is prepared and its OER activity will be discussed. 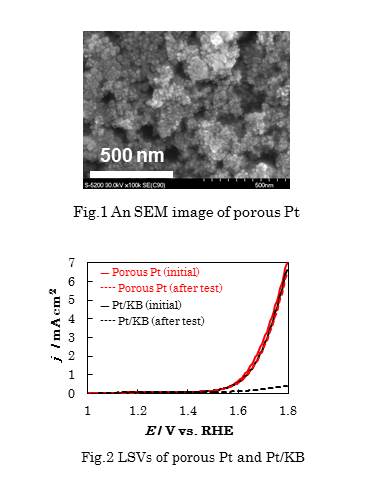