Prince George's Exhibit Hall D/E (Gaylord National Resort and Convention Center)
G. Wang, D. Zheng, D. Liu, J. Harris, J. Si, T. Ding, and D. Qu (University of Wisconsin Milwaukee)
Oxygen evolution reaction (OER) is a vital half-reaction in many (photo)electrochemical energy storage and conversion systems, such as water splitting, rechargeable metal-air batteries and regenerated fuel cells. Unfortunately, this reaction usually suffers from slow kinetics and huge overpotentials. Therefore, the development of highly efficient electrocatalysts with good activity and durability have been in urgent demand to improve the energy efficiency and the reaction kinetics. The discovery of positive effect on Ni-based electrodes with Fe impurities (even at ultralow content) towards OER dated back to last century. Ni-Fe based materials (NiFe alloy, NiFe oxide and NiFe layered double hydroxides) with various compositions, morphologies and crystalline nanostructures were reported to have good activity and durability towards OER in alkaline media. Despite the great progress in preparing the Ni-Fe based OER catalysts, their activity and stability remained unsatisfactory and further improvements were necessary before it can become feasible for practical applications. Several effective strategies were usually adopted for optimizing the electrocatalytic performance, including (i) adjusting the composition or crystal structure in order to enhance its intrinsic catalytic performance by changing the electronic structure, (ii) adopting nanostructures to increase the electrochemical active surface area and expose as many active sites as possible, (iii) decreasing the contact resistance by growing catalyst directly onto conductive substrate or mixing the catalyst with a conductive agent due to the limited conductive nature of Ni-Fe based oxides or hydroxides, (iv) facilitating the mass transfer (including electrolyte infiltration and oxygen gas bubble release) and avoiding the “waste” of active sites caused by the separation of catalytic active sites and reactant. Based on the above strategies, several synthesis methods were evaluated, such as co-precipitation of mixed metal precursors, solvothermal or hydrothermal methods, electrochemical methods, etc. Nevertheless, it remains challenging to integrate the advantages of all these strategies.

Herein, we report a controllable in-situ growth of Ni-Fe based porous nanosheets directly onto Ni foil using a novel and facile pulse electrochemical approach, in which nickel ions were leached out from the substrate with the assistance of Cl- and then re-deposited onto the substrate together with Fe2+ in a single rapid current pulse. After multi-cycle pulses, the substrate roughness was greatly increased and Ni-Fe based catalyst was formed on the substrate surface at the same time. During the catalyst formation process, a large amount of gas bubbles was generated under the harsh electrochemical conditions. The rapid gas evolution facilitated the self-assembly of gas release channels, which, on one hand, increased the surface roughness and benefited the exposure of the active site, on the other hand, insured the binding stability between the as-formed Ni-Fe layer and Ni foil substrate under the gas-generated OER conditions. Moreover, the growth situation of Ni-Fe based film could be easily monitored and controlled through the changing of the applied voltage. As expected, the as-prepared Ni-Fe based electrode exhibited remarkable activity and long-term durability towards the OER in alkaline media. The overpotential for the OER is as low as 250 mV at 10 mA/cm2 and 300 mV at 100 mA/cm2. The catalytic reaction can last over 140 h without observable decay. The Tafel slope for the catalytic reaction is only 29.7 mV/dec. The high electrocatalytic performance is attributed to both the enhancement of its intrinsic activity and the self-optimizing microstructure of electrode. 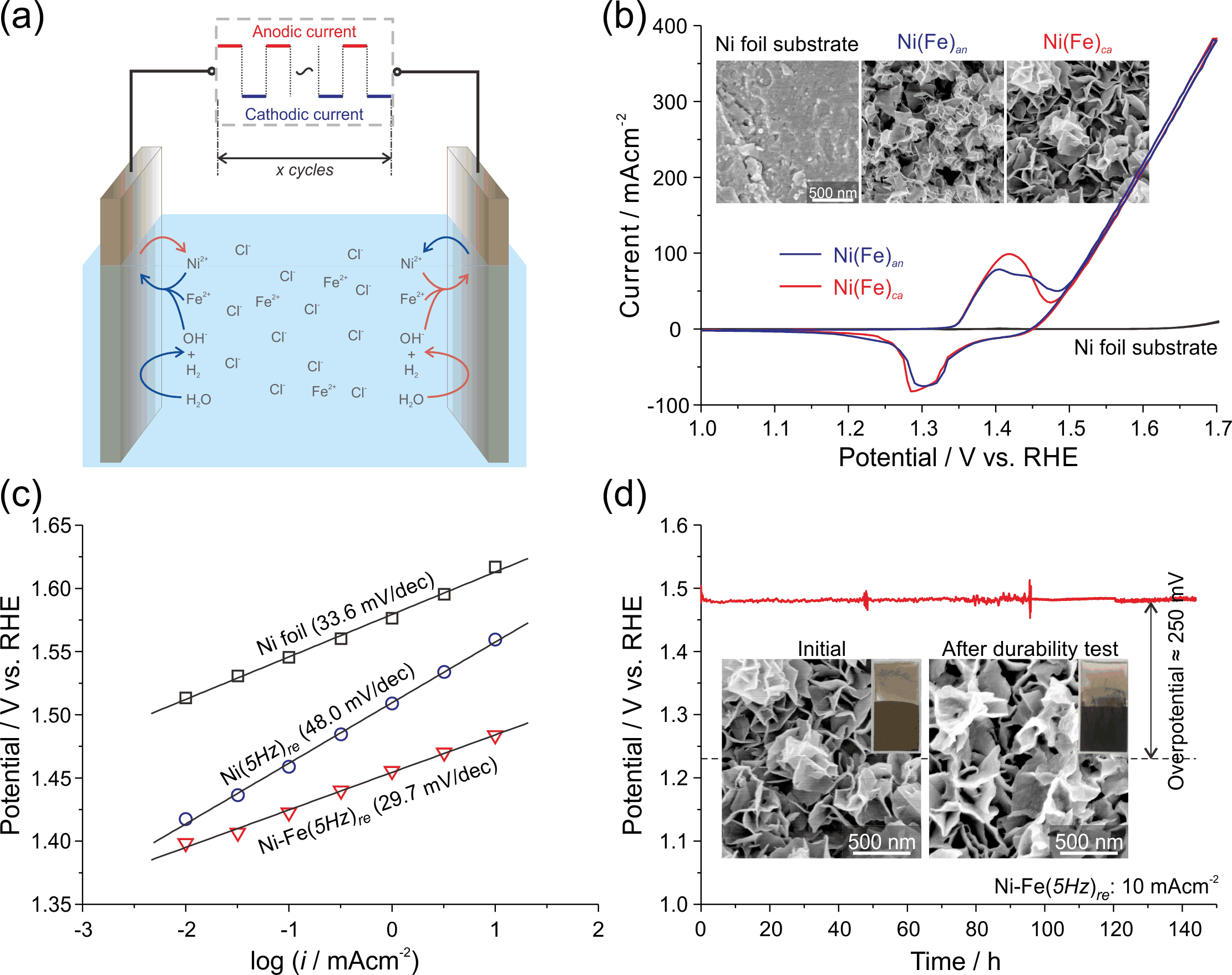