Recently, the Mg secondary battery has been studied for the purpose of the development of the rechargeable battery with larger energy density than the Li-ion battery. In this study, we focused attention on the Li1.2Mn0.54Ni0.13Co0.13O2, which is a positive electrode material of the high capacity lithium ion battery, to examine the use for the cathode material capable of inserting Mg ions. We have reported the crystal and electronic structures and thermodynamic stability of the chemically delithiated Li1.2-xMn0.54Ni0.13Co0.13O2 (x = 0.3, 0.6, 0.9)1). Although there is no knowledge about the insertion and desorption of Mg for the delithiated material, the high capacity such as shown in the Li ion battery is expected for Mg secondary battery. The purpose of the present study was to evaluate the electrode property of delithiated Li1.2-xMn0.54Ni0.13Co0.13O2 in the Mg secondary battery, to analyze the crystal and electronic structure changes before and after Mg insertion, to reveal the valence change of transition metals, and furthermore to examine the charge/discharge mechanism.

Li1.2Mn0.54Ni0.13Co0.13O2 was synthesized by using a solid-state reaction via co-precipitated precursors. Precipitation was obtained by dissolving each metal nitrate in distilled water and adding it dropwise to an aqueous solution of lithium hydroxide. Based on the predetermined metal ratio of the precipitate, we added lithium hydroxide to the precipitate again, and dried and heated at 650 ºC for 15h in air. After that, the powder was calcined at 900 ºC for 8h in air to obtain a sample. The obtained samples were identified by powder XRD. The metal composition was determined by the ICP-AES. The chemically delithiation treatment was pursued as the previously reported using NO2BF4 in an argon filled glovebox1).

Chemically delithiated Li0.13Mn0.54Ni0.13Co0.13O2 was synthesized using NO2BF4 for Li1.2Mn0.54Ni0.13Co0.13O2. In order to refine the crystal structure of this sample, synchrotron X-ray diffraction measurement was performed and Rietveld analysis was performed. As a result of the analysis, it was revealed that the 97 % of the pristine monoclinic (C2/m) structure converted to the trigonal (Rm) structure after delithiation. As a result of discharging test of this sample with the counter electrode of Mg alloy (AZ31), the discharge capacity was 287 mAh g-1 (Fig.1) which corresponded to 0.52 apfu as the insertion amount of Mg and corresponded to approximately half of chemically eliminated Li.

In order to refine the crystal structure of the electrode after electrochemical Mg insertion, synchrotron XRD measurement was performed and Rietveld analysis was performed. As a result of the analysis, it was revealed that the 91% of the delithiated phase remained as trigonal Rm structure. In addition, it was revealed that unit cell volume expanded by 2.8% at C2/m and by 2.7% at Rm after Mg insertion. 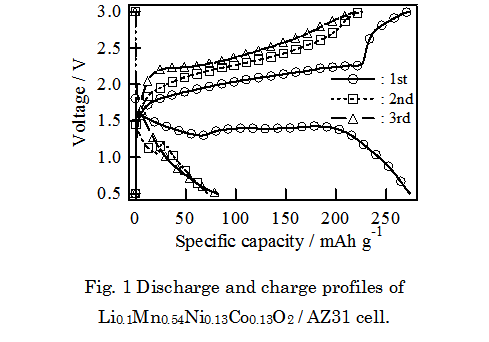