In recent decades, the Solid Oxide Fuel Cell (SOFC) has attracted much attention because of low environmental load and high power generation efficiency. However, materials which can be used for SOFC are limited due to the high temperature operation, i.e. 1000℃, and therefore lowering of the operating temperature is required. From such background, we focused on La6WO12-based materials that show enough proton conductivity of 3 × 10 -3 S / cm (800℃) to be applied to an electrolyte of SOFC1). This material can be denoted as La28-xW4+xO54+δ□10-δ (□ : oxygen vacancy) in which part of oxygen is lost, and proton taken into the crystal through the oxygen vacancies conducted by a hopping mechanism. In previous works on the materials, it could be found that total conductivity was improved by doping Mo for the W site2). Although changes in such a conduction properties are thought to be closely related to the crystal and electronic structures, the detailed structures are still unclear at the moment. Therefore, in this work, we prepared La5.7W1-xMoxO12–δ (x=0, 0.1, 0.3), and investigated the atomic configurations of the samples by analyzing neutron and synchrotron X-ray total scatterings with the density functional theory (DFT).

La5.7W1-xMoxO12–δ (x=0, 0.1, 0.3) were synthesized by a solid-state method. La2O3, WO3 and MoO3 as starting materials were wet-mixed with a planetary ball mill, and then calcined at 800 to 900℃ in Air for 15 h and sintered at 1500℃ in Air for 15 h. The samples were identified by X-ray diffraction. The metal compositions were evaluated by inductively coupled plasma spectroscopy (ICP). Cross-section morphologies of the bulk samples were observed by scanning electron microscopy (SEM). The densities of the sintered pellets were evaluated by the Archimedes method. Conductivity measurements were carried out between 300-900℃ by the AC impedance method. Neutron diffraction measurements were performed at SPICA (J-PARC, Japan) and synchrotron X-ray diffraction measurements were at BL19B2 (SPring-8, Japan). The data were refined by the Rietveld technique (Z-code, RIETAN-FP). In addition, the reduced pair distribution function (PDF) derived from neutron total scattering measurement at NOVA (J-PARC, Japan) were analyzed.

It was found from XRD patterns that La5.7W1-xMoxO12–δ(x=0, 0.1, 0.3) were a single phase of a cubic crystal (space group: F-43m). The analytical compositions of La5.7W1-xMoxO12–δ (x=0, 0.1, 0.3) evaluated by ICP were essentially equal to the nominal compositions. From results of the Archimedes method and observing the cross-section morphologies for the ceramics, the samples were sufficiently dense for conductivity measurements. Conductivities were measured in a wet atmosphere (PH2O= 4.2 kPa) by the AC impedance method. As a result, it was confirmed that the total conductivity was improved at 600 ℃ or lower by doping Mo. It was also indicated that the samples exhibited proton conduction, from an H/D isotope effect on the conductivity.

In order to investigate the crystal and electronic structures in detail, the Rietveld analysis was performed on La5.7WO12-δ and La5.7W0.7Mo0.3O12-δ using synchrotron X-ray and neutron diffraction data. It was found that the O3, O4 site occupancy was lower than the other oxygen sites. In addition, as a result of neutron total scattering measurement for deuterated La5.7WO12-δ, a peak corresponding to O-D was observed in G(r). The position of deuteron (proton) could be explained well by the DFT calculation using the refined unit cell as the host structure (Fig. 1).

The electron density distribution was calculated by using the atomic arrangement obtained from DFT. Using the results, the average effective charge of each metal was analyzed by the Voronoi method. The analysis revealed that the effective charge of W was decreased by doping Mo. This suggests that the covalent bonding of W-O becomes stronger by doping Mo. Such a change may result in weaker bonding of O-H and thus higher proton conductivity. 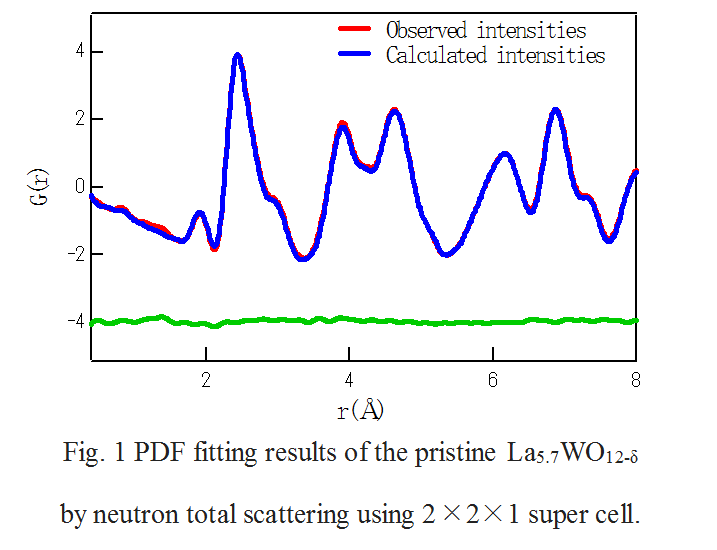