The development of rechargeable Al ion batteries has been hampered by the electrolyte and cathode materials. Due to the low reduction potential of Al (-1.68 V vs. SHE), aqueous electrolytes cannot be used when Al is being used as the anode, since hydrogen will be released before Al can be plated during the reduction process. As an alternative, ambient room temperature ionic liquids with high ionic conductivity and wide electrochemical windows are good candidates for rechargeable Al batteries. Currently, the ionic liquids used for Al deposition are still based on mixtures of anhydrous AlCl3 and organic halide salts.5  It is well-known that only the acidic mixtures show reversible Al deposition/stripping, which poses stringent requirement for the hardwares of the Al batteries.6 To avoid the corrosion issue, pouch cell and special cell configuration have been used.7 Besides electrolytes, Al batteries also face challenges from the cathodes due to the high charge density of the Al3+ ion, making its insertion/extraction into/from the cathode host very difficult.

An alternative way to take advantage of metallic Al anode but bypasses the need for efficient Al insertion cathodes is hybrid Al battery.7 It was demonstrated that high voltage and high capacity were possible in a hybrid Al battery with LiFePO4 as the cathode in an acidic ionic liquid electrolyte.7 However, a switch to the more earth-abundant sodium chemistry is more desirable due to the limited Li resources. In this presentation, we report a new hybrid battery using earth-abundant Na and Al chemistry, that is, Al as the anode, Na3V2(PO4)3 (NVP) as the cathode and NaAlCl4 dissolved in acidic ionic liquid as the electrolyte.8 The hybrid battery exhibits a discharge voltage of 1.25 V and a cathodic capacity of 99 mAh g-1 under a current rate of C/10. In addition, the hybrid battery exhibits good rate performance and long cycling stability while maintaining a high coulombic efficiency of 98 %. It is also demonstrated that increasing salt concentration can further enhance the cycling performance of the hybrid battery. X-ray diffraction analysis of the NVP electrodes under different conditions confirms that the main cathode reaction is indeed the Na extraction/insertion. 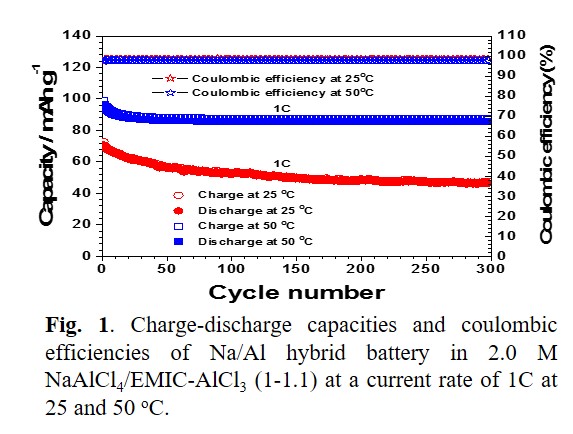