Recently proton conducting ionic liquids, particularly N,N-diethymethylammoniumtetraflurosulfonate (dema-TfO) have attracted much attention as electrolytes enabling the fuel cell operation at intermediate temperature above 100 ⁰C. In fact, prototypes of intermediate temperature fuel cells using dema-TfO have been developed by some research groups including us1,2. As increasing the operating temperature, the electrochemical activity of catalyst increases which can expand the selection of electrode catalysts.

Carbon-based nanostructures have been confirmed to be excellent materials for enhancing oxygen reduction reaction (ORR) for conventional PEFCs with perfluorosulfonate polymers3. In this study, we have synthesized nitrogen-doped graphene (NG) by simple pyrolysis of graphene oxide (GO) and urea mixture at 900 ºC under Ar atmosphere as an ORR catalyst for intermediate temperature fuel cells using ionic liquids. The oxygen reduction activity of NG has been studied using a rotating disc electrode in dema-TfO under N2 and O2atmosphere at different temperatures. The ORR onset potential and current density shifted to positive and increased with increasing temperature. The comparison with pristine graphene at 120 ⁰C (Fig. 1) clearly indicated the positive effect of nitrogen doping on the improvement of ORR activity. Although the ORR activity of NG was still lower than that of commercially available Pt/C (37.5%), it has excellent electrochemical stability. The durability test was measured based on the protocol of the Fuel Cell Commercialization Conference of Japan (FCCJ). Even after 2000 cycles in the potential range of 1.0 to 1.5 V vs. RHE, NG retained almost the same onset potential, which is much higher durable than those of Pt/C (~ 15.6 % loss). 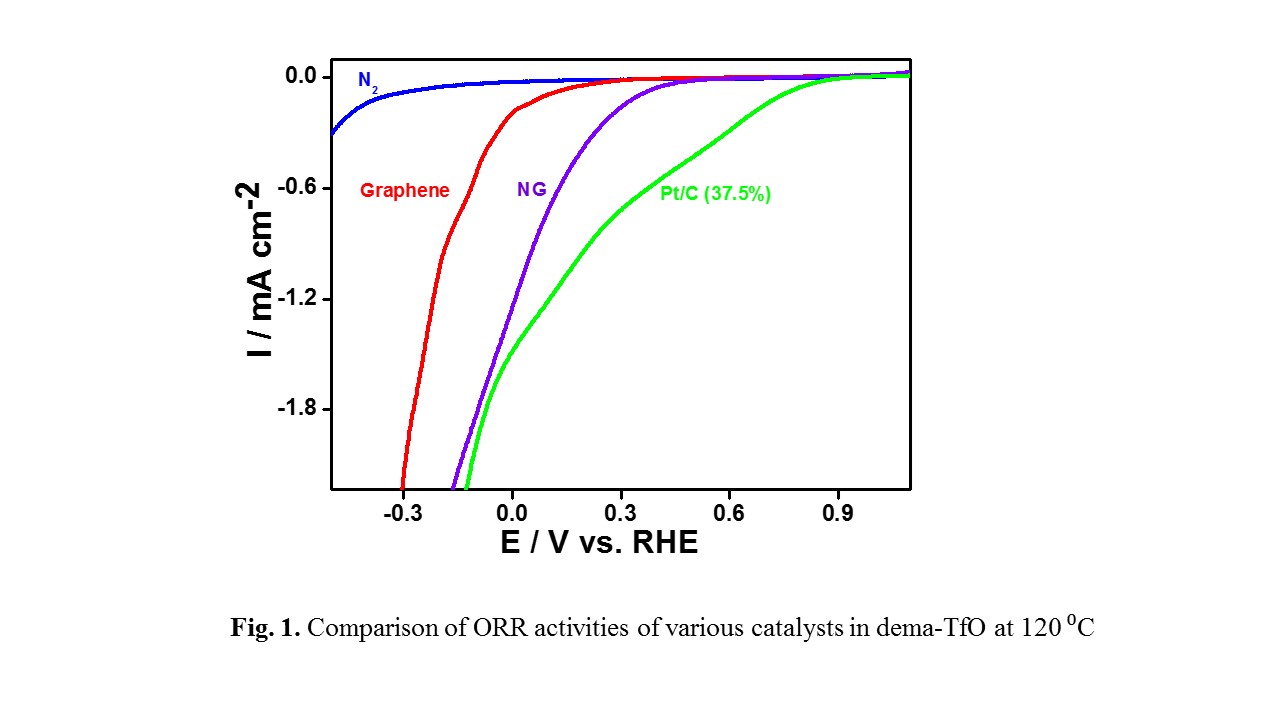