Prince George's Exhibit Hall D/E (Gaylord National Resort and Convention Center)
Y. Mukouyama, S. Yamaguchi, K. Iida, T. Kuge, M. Kikuchi (Tokyo Denki University), and S. Nakanishi (Osaka University)
The electrochemical oxidation of methanol on platinum has been extensively studied because it is one of the fundamental electrochemical reactions and also because it is an important reaction in fuel cell technology. At the anode of the direct methanol fuel cell, the oxidation reaction occurs in the presence of water:

It is well known that the oxidation reaction proceeds via a dual path mechanism consisting of indirect and direct paths. The indirect path involves adsorbed carbon monoxide (COad) as a poisoning intermediate, and the direct path involves a non-CO intermediate as a reactive one. It is also well known that the electrode potential spontaneously oscillates when the methanol oxidation is carried out under galvanostatic conditions (see Figure 1c). In general, an N-shaped negative differential resistance (N-NDR) plays an important role in an electrochemical oscillation. On the analogy of the oxidation of formic acid in aqueous solutions [1], it is most likely that the methanol oxidation is suppressed by the adsorbed water. In other words, an N-NDR, which is involved in the direct path of the methanol oxidation in aqueous solution, is attributed to the adsorption of water.

Although water plays important roles not only in the N-NDR but also in removal of COad, little studies have been carried out with respect to the methanol oxidation in the absence of water. We then have studied the effect of water content on the methanol oxidation [2]. The study showed that the oxidation produced current without water, and also that the current was larger than that in the presence of water, e.g., 0.1 and 1 M methanol aqueous solutions (see left panels in Figure 1). The removal of COad was observed at high potentials, which was directly confirmed by surface-enhanced infrared absorption spectroscopy. Accordingly, we proposed that the CO desorption was via the reaction:

and also that the current producing reactions was:

Surprisingly, the potential oscillation occurred in the absence of water (see Figure 1d), clearly indicating that there existed an N-NDR that was not attributed to the water adsorption. In the presentation, we will provide evidence that reaction (4) preferentially occurs when water is absent and also will propose an NDR-inducing factor other than the adsorbed water.

This work is partially supported by Research Institute for Science and Technology of Tokyo Denki University under Grant Q16K-02.

Figure 1 (a and b) Voltammograms for the oxidation of methanol at a sweep rate of 0.1 V/s, and (c and d) time course of electrode potential measured under galvanostatic conditions. The concentration of methanol is (top) 0.1 and (bottom) 25 M. 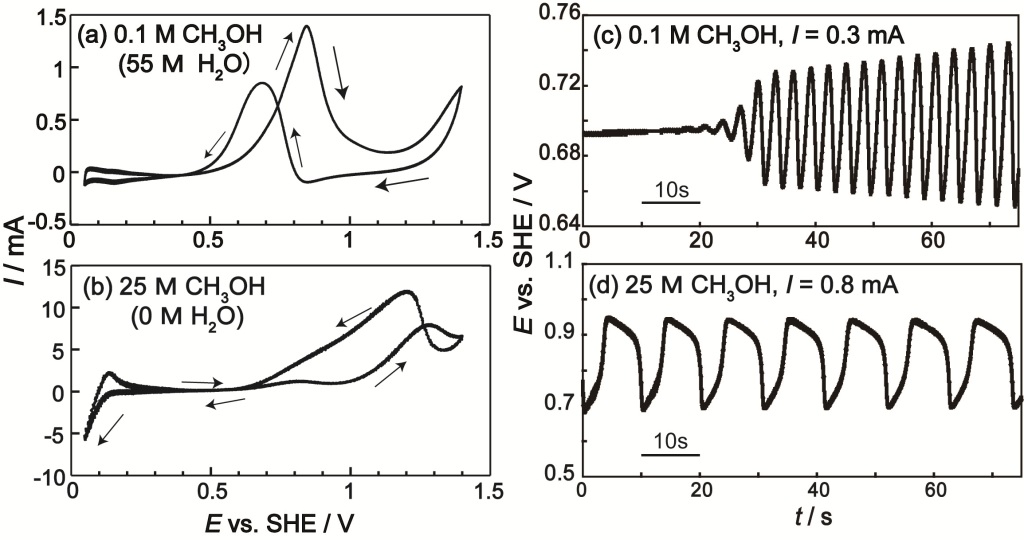