National Harbor 1 (Gaylord National Resort and Convention Center)
M. Lammer, A. Königseder, and V. Hacker (Graz University of Technology, CEET)
Lithium ion battery systems are wide spread commercial products found in present day electric and electronic applications. For portable devices like laptop computers and mobile phones as well as electric vehicles high energy density and reliability are crucial [1]. High energy density also creates risks in the case of malfunction. In batteries energy is stored electrochemically within the electrodes, thus fuel and oxidiser are confined within a single container. This allows easy discharging and recharging of secondary batteries as the charge transfer is achieved over small distances and on defined surfaces. In the event of failure, chemical reactions occurring between the highly reactive electrodes or between single electrodes and electrolyte pose a serious threat to operator, device and environment. One of these failure scenarios is associated to the thermal runaway of lithium ion cells [2,3].

The thermal runaway is initiated by exothermic degradation of the battery’s components. These effects occur due to accumulation of heat within the cell, i.e. the self-heating rate surpassing the heat dissipation rate [3,4]. During these deterioration processes several effects are observable. Decay and evaporation of the organic electrolyte invokes pressurisation of the can, eventually leading to the emission of gas. The solid electrolyte interphase also degrades at elevated temperature, thus it no longer screens the electrodes. Chemical reactions of the electrolyte with the electrodes further promote the generation of gaseous components [5]. Internal short circuits occur at higher temperature after melting or thermal shrinking of the polymer separator. Exothermic reactions drive the thermal deterioration of the whole electrochemical cell. The self-heating and thus promotion of the catastrophic cell failure culminates in the emission of large quantities of heat and both toxic and flammable gas. As neighbouring cells within a battery pack are also affected by these incidents, thorough characterisation of these events is paramount for improving battery safety.

In this work we present a holistic approach to the characterisation of cylindrical Li-ion cells of the 18650 format by thermal ramp tests and consecutive as well as online analysis. Single cells are heated with constant power. Monitoring of the cell temperature and calculation of the self-heating rates offer a reproducible way of identifying and interpreting characteristic events [6–8]. These events comprise the first venting, the exothermic onset and the beginning of the thermal runaway. Volumetric determination of the gaseous emission is achieved online by displacement of liquid from communicating vessels. This method allows the time resolved measurement without pressurisation of the test setup. A custom made gas sampler is used for automatic collection of GC samples at the characteristic events. The first phase showed no gas release which was also confirmed by GC analysis. The second phase is characterised by the sudden venting of mainly CO2. This emission is accompanied by slight Joule-Thompson cooling. The third phase, the thermal runaway, is characterised by a self-heating rate of ≥2 °C min-1. It is concluded by a rapid temperature increase associated with the deflagration of cell components. This is accompanied by an emission of mainly H2 and CO (depicted in figure). 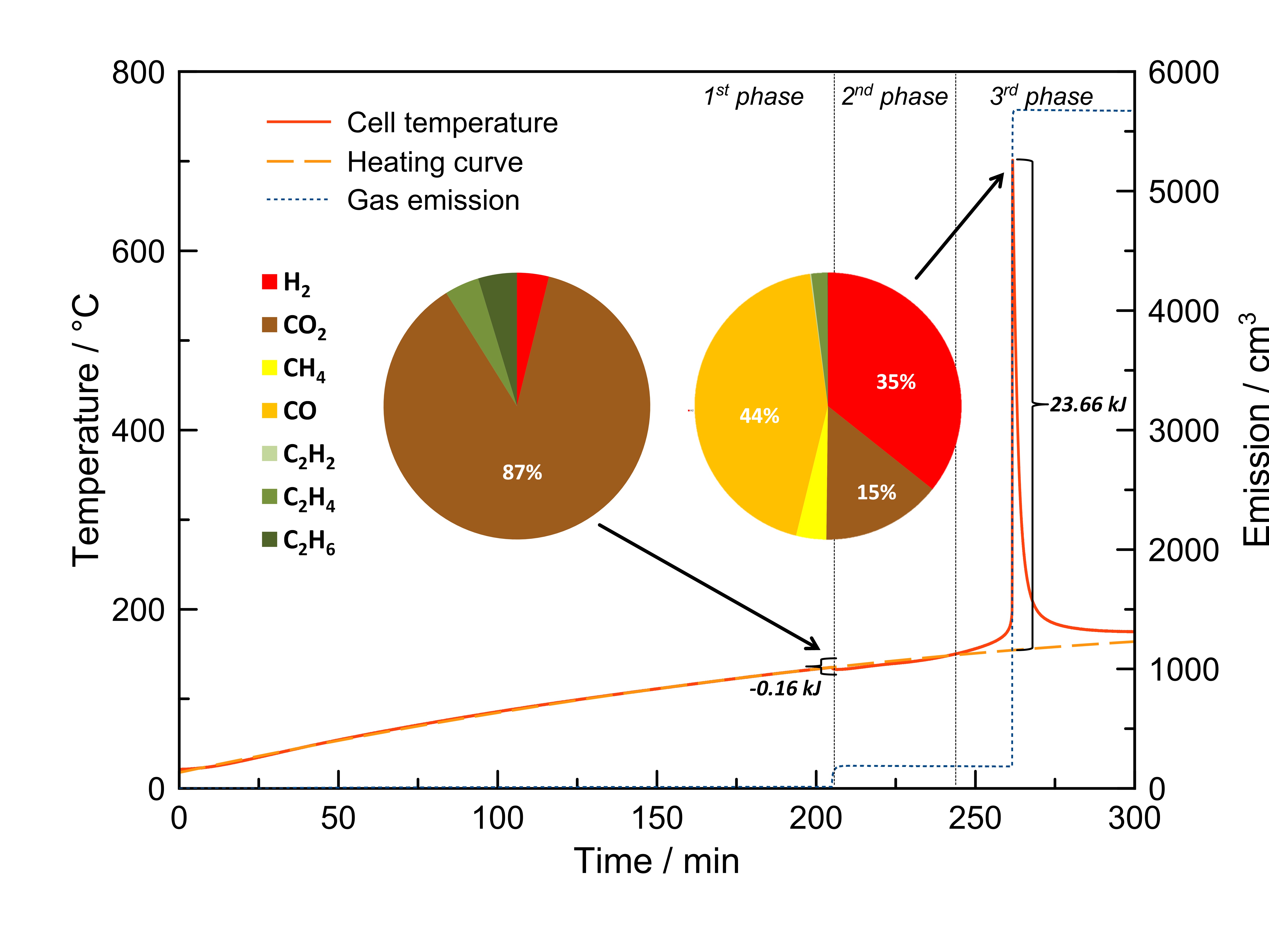