1463
Migration and Stabilization of Radical Scavengers in PEFCs

In this work, we identified the fundamental Ce migration mechanisms during PEM fuel cell operation. Using a novel elemental analysis technique based on X-ray fluorescence (XRF), we characterized Ce migration due to potential and concentration gradients, water flux, and degradation of Ce-exchanged sulfonic acid groups within the PEM. During accelerated stress tests (ASTs), which are designed to reproduce and enhance stressors the cell will experience in the field, we have observed that < 1% of Ce exits the cell during open circuit voltage (OCV) between 30% and 100% RH. It does, however, irreversibly migrate from the PEM into the CLs at a rate correlated to AST aggressiveness. As a result, Ce accumulation in the CL reduces performance, while Ce migration out of the PEM lowers the PEM’s ability to resist the harmful effects of reactive radicals.

In order to determine the relevant Ce transport coefficients during cell operation, Ce migration was induced in PEMs using H2 pump experiments under a range of applied potentials at 50% and 100% RH. Ce profiles were intermittently measured using XRF and fit with a 1-D Nernst-Planck equation. Using this model, diffusion and ion mobility coefficients were extracted, which arise due to concentration and potential gradients during the H2 pump experiments, respectively. The results show the rapid and significant effects of such gradients on Ce movement. Using this knowledge, we propose system control and additional material engineering strategies to mitigate Ce migration due to potential and concentration gradients, in order to reduce performance losses and improve cell durability.

We have also determined that the degradation of Ce-exchanged ionomer side chains during aggressive ASTs results in significant Ce migration from the PEM into the CLs. In order to counter undesirable migration due to ionomer degradation, we propose the use of more efficient radical scavengers or improved localization of scavengers near areas of highest radical generation. Zirconia-doped ceria (CZO) has previously been shown to enhance peroxide reactivity while minimizing byproduct radical generation.5 We have demonstrated that adding CZO to the cathode CL, where significant peroxide and radical generation occurs6,7, results in identical initial cell polarization performance compared to CZO-free cells. During PEM chemical stability ASTs, however, CZO reduces gas crossover (Figure 1a) and fluoride emission (Figure 1b) rates, which implies that it is a more effective radical scavenger. Less ionomer degradation results in stable performance of the CZO-enhanced MEA after 500 hours of ASTs. Furthermore, after >1400 hours of ASTs, the Ce concentration in the PEM was maintained at its initial value due to the protective capabilities of CZO. 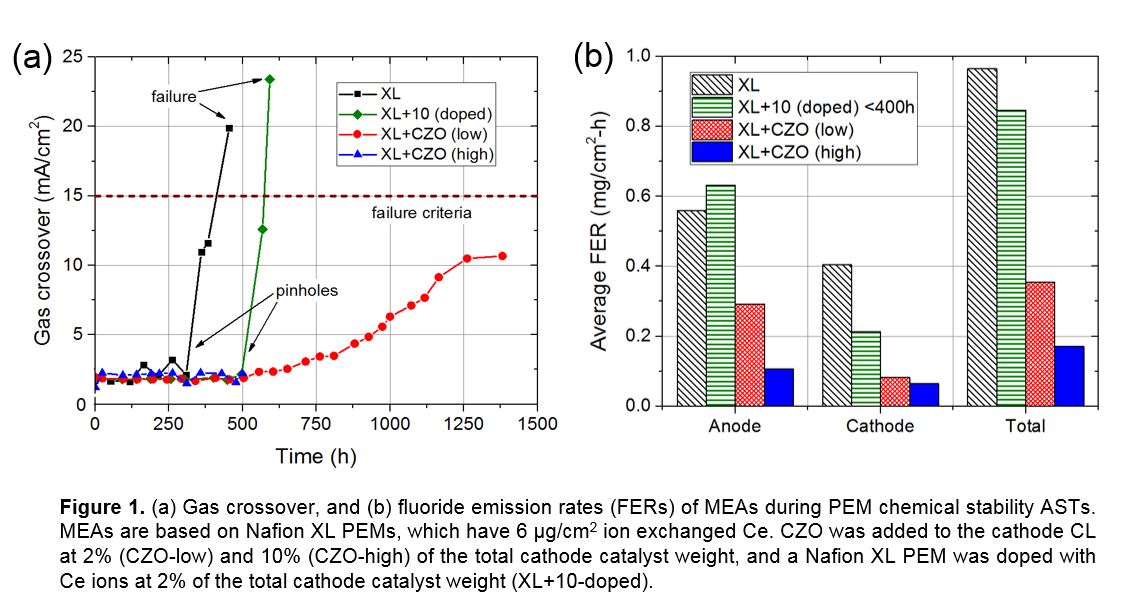