Prince George's Exhibit Hall D/E (Gaylord National Resort and Convention Center)
R. Nozaki (Hokkaido university), Y. Tabe, T. Chikahisa (Hokkaido University), and T. Tanuma (Asahi Glass Co., Ltd.)
It has been widely accepted that micro-porous layers (MPLs) improve the cell performance by promoting water removal from reaction area in PEFC. Most MPLs are made of carbon black (CB) and hydrophobic polymer (PTFE). However, some recent studies reported that the cell with the hydrophilic MPL with carbon fiber (CF) and ionomer shows better cell performance than that with the conventional hydrophobic MPL in a wide range of humidity conditions (1). In addition, the previous research by the authors suggested a possibility that the hydrophilic CF-MPL promotes water removal from the catalyst layer (CL) (2). This study tried to develop the limiting current method to evaluate the oxygen transport resistances in the CL and in the other parts quantitatively under flooding conditions. Using the developed method, the effects of water on the oxygen transport resistances were compared between with the hydrophobic CB-MPL and with the hydrophilic CF-MPL. Further, microscopic distributions of water in the cross-section at the cathode side MPLs were observed by a freezing method and a cryo-SEM (2). In this study, a small cell with active area of 1.8cm2(0.9cm × 2.0cm) was used because the cell must be frozen and disassembled rapidly for the freezing method. GDLs with two types of MPLs were used at cathode side in experiments: a 10µm thick MPL with CB and hydrophobic PTFE and a 30µm thick MPL with CF and hydrophilic ionomer. These GDLs with MPLs were experimentally made by Asahi Glass Co., Ltd. At anode side, the hydrophobic CB-MPL was used. The catalyst coated membrane (CCM) used in this study were made by W. L. Gore & Associates, Co., Ltd. In this study, the experiments consisted of the cell performance measurements and observations of water distribution in the vicinity of MPL. The freezing method and the cryo-SEM were used for the observation (2). The cell temperature and relative humidity were set at 70°C and 81%RH, respectively.

The polarization curves of the cell using the two types of MPLs are compared at 100kPa with O2 21% and at 220kPa with O2 24% in Figure 1. There is little difference in the polarization curves at 100kPa, while at 220kPa the cell voltages with the hydrophilic CF-MPL are higher at high current densities. This result suggests that the CF-MPL suppresses an increase in the concentration overvoltage due to flooding.

Figure 3 shows the water distribution in the vicinity of MPLs at just before limiting current. There is ice layer at the interface between the MPL and the CL in each case, (a) with the hydrophobic CB-MPL and (b) with the hydrophilic CF-MPL. This indicates that improving adhesion of the MPL and the CL is important for suppression of flooding at the interface. Focusing on the hydrophilic CF-MPL, a small amount of water intrudes the pores of the MPL. Further, the CL appears to be filled with less ice with some vacant pores remaining in spite of higher current density. These water distributions correspond to the measured oxygen transport resistance in Figure 2 and the idea that the hydrophilic CF-MPL promotes water removal from the CL. 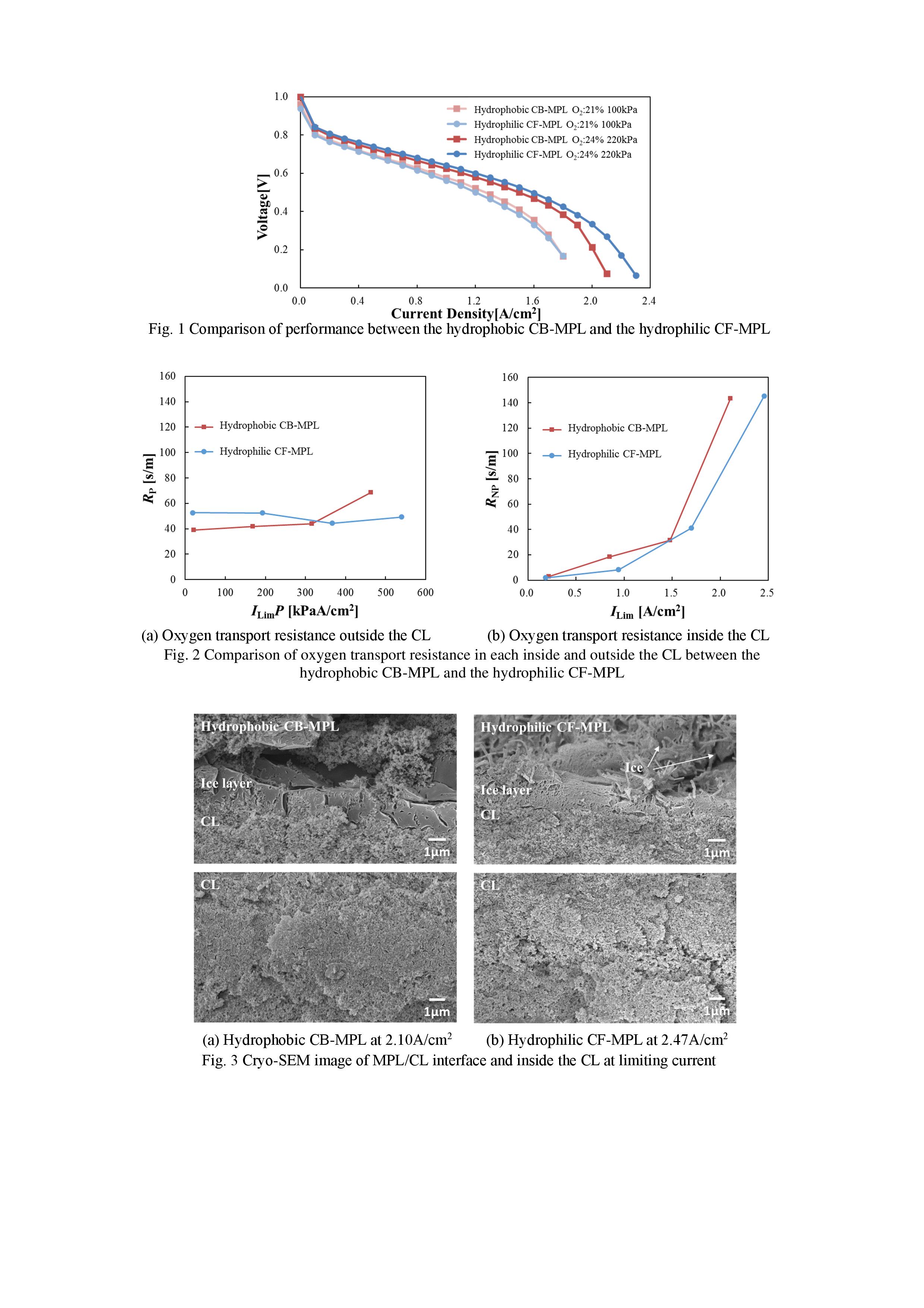