Chesapeake J (Gaylord National Resort and Convention Center)
A. M. Bizeray (Department of Engineering Science, University of Oxford), J. H. Kim (Samsung Advanced Institute of Technology), S. R. Duncan (University of Oxford, Department of Engineering Science), and D. A. Howey (Department of Engineering Science, University of Oxford)
Besides their widespread use in consumer electronics, lithium-ion batteries are becoming a technology of choice in automotive as well as grid and off-grid energy storage applications. Such large-scale battery systems require advanced and more accurate diagnostics and prognostics tools to maximize the battery performance over its lifetime. Increasingly, researchers are investigating the use of electrochemical lithium-ion battery models to enhance the state estimation and prediction capabilities of battery management systems (BMSs), for example by allowing fast charging while minimizing degradation [1-3].

In recent work [4-5], we have shown that electrochemical models, including the Newman pseudo two-dimensional (P2D) model [6], can indeed be used for lithium-ion battery state estimation. However, an important challenge remains as whether the parameters of such electrochemical models, including geometrical and physical properties, can be estimated for commercial cells from available measurements of voltage, current and temperature. Previous studies attempting the parameter estimation of electrochemical lithium-ion battery models, such as [7-8], have revealed the challenging nature of this identification problem and shown that not all model parameters can be estimated uniquely and with satisfactory confidence.

We present a structural and practical identifiability analysis of an electrochemical model for lithium-ion batteries, namely the single particle model (SPM) [9]. The SPM is a simplification of the Newman P2D model, valid at low currents, which neglects electrolyte dynamics and assumes uniform reaction rate across each electrode. The structural identifiability approach allows determining which parameters of the SPM can be identified in principle. The approach first involves grouping the parameters and partially non-dimensionalizing the SPM to reveal that there are only a small number of unique grouped parameters, excluding open-circuit potential functions, required to fully parameterize the SPM. Then, by asking whether the transfer function of the linearized SPM is unique, we show that these parameters can be identified from experimental data provided that the electrode open-circuit potential functions have a known and non-zero gradient, the electrode parameters are ordered and the parameters describing kinetics in both electrodes are combined into a single charge-transfer resistance term.

Considering results from this structural identifiability analysis, we then investigate the practical identifiability of the SPM by performing parameter estimation against experimental frequency-domain electrochemical impedance spectroscopy (EIS) data at various depth-of-discharge (DoD). This practical analysis confirms the crucial role played by the electrode OCP dependency on DoD for the parameter estimation of lithium-ion battery electrochemical models. If the gradient of an electrode open-circuit potential is zero, the parameters associated with this electrode cannot be identified; this is shown on figure 1a where the minimum of the cost function is extended along the anode parameter (i.e. the anode parameter is unidentifiable) since the anode OCP is almost flat at this DoD. At 10% DoD however, figure 1b, both the anode and cathode OCPs have a significant gradient resulting in a smaller minimum region, i.e.more accurate parameter estimate. Finally, assuming that the Fickian diffusivity in each electrode material is constant, we show that EIS data at several DoDs must be combined to obtain confident parameter estimates for both electrodes, figure 1c. Especially, EIS data at complementary DoDs where in turn the anode and cathode OCP slopes are significant must be combined to yield good parameter estimates.

Financial support is gratefully acknowledged from EPSRC UK (EP/K002252/1) and from Samsung Electronics Co. Ltd. through a collaborative research project between the Samsung Advanced Institute of Technology and the University of Oxford. 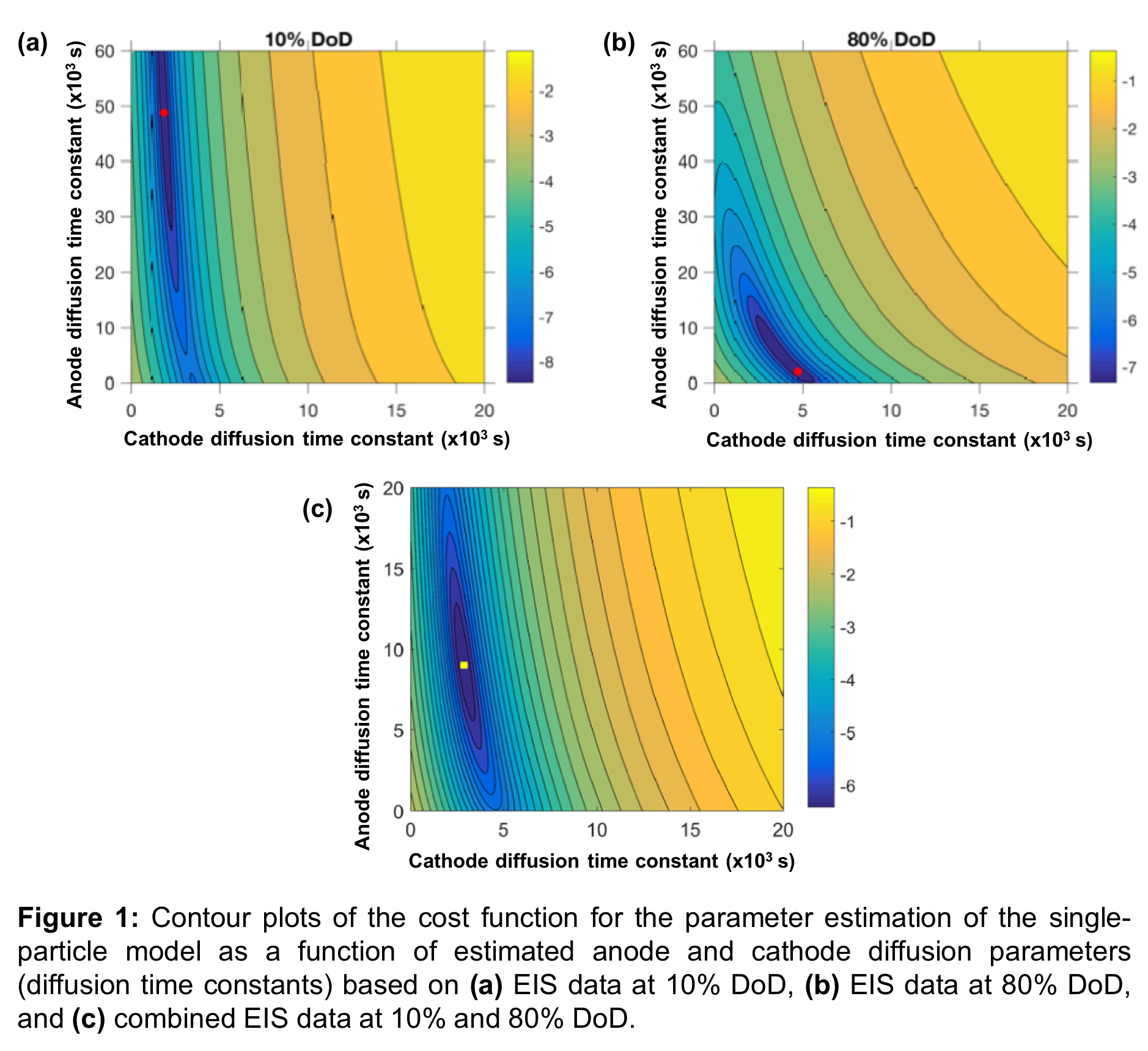