Maryland A (Gaylord National Resort and Convention Center)
D. Qiu (Shanghai Jiao Tong University, IEK-3 Forschungszentrum Jülich GmbH), L. Peng, P. Yi, X. Lai (Shanghai Jiao Tong University), H. Janßen (IEK-3, Forschungszentrum Jülich GmbH), and W. Lehnert (IEK-3, Forschungszentrum Jülich GmbH, RWTH Aachen University)
Proton exchange membrane (PEM) fuel cell is considered to be a promising power source for vehicles, portable application and stationary by virtue of its zero pollution, low operating temperature, fast start-up and high efficiency. Contact behavior between gas diffusion layer (GDL) and bipolar plate (BPP) is of significant importance to the performance of PEM fuel cell. Most current studies for contact behavior are conducted by experiments and finite element analysis (FEA), which lead to high cost and huge computation for the whole fuel cell [1,2]. Comparatively speaking, the more generalized and effective analytical methods are deficient in this field because of multiscale features (from several-μm fiber to hundreds-mm fuel cell) and complex diverse mechanical properties of the components (such as the fibrous GDL and solid bipolar plate) [3]. The objective of this study is to build a numerical model to predict the contact behavior via a micro scale model for the “mechanical-electrical” relation between fibrous carbon paper and solid surface, as well as a macro scale model for the electrical contact resistance (ECR) of whole fuel cell.

For the micro scale model, mathematical descriptions of solid surface topography and carbon fiber structure are established according to actual features of the components at the interface. Solid surface profile is modeled by the classic Greenwood & Willamson rough surface. Carbon paper is simulated by the random line network model based on the multi-layer construction. Contact pressure and resistance are calculated to generate the “mechanical-electrical” relation based on the Hertzian theory and statistical methods. In the micro model, the effects of carbon paper compression and internal fiber contact on contact resistance are given necessary attention, which are not considered in previous studies [4]. For the macro scale model, the ECR of whole fuel cell is calculated based on the predicted “electrical-mechanical” constitution relation. First, channel configuration of widespread metallic BPP is described according to the forming process and measurement of channel configuration. Then, nonlinear contact pressure distribution is obtained based on the interface deformation characteristic and Winkler surface model. Finally, ECR considering the channel configuration is calculated based on the “electrical-mechanical” constitution relation from micro model.

Experiments of metallic BPP fabrication and ECR measurement are conducted to validate the multiscale numerical model. In the comparison, the model results show good agreement with the experimental results as shown in Fig.1 (b). During the experiments, the measurement results also show obvious dependence on the micro topography and channel configuration of the contacting BPP and GDL. Hence, influences of interface topography, material property, GDL deformation, and channel configuration are systematically studied based on the multiscale model. As shown in Fig.1 (c), it is found that lower ECR would be generated by reducing of surface roughness and softening of material, and significant increase occurs in ECR as the channel width decreases because of the growing contribution of channel gradient region. Size factor is proposed to evaluate the influence of various feature scale to the contact behavior in the fuel cell. Moreover, the assembly process of fuel cell could also be evaluated by the multiscale model. 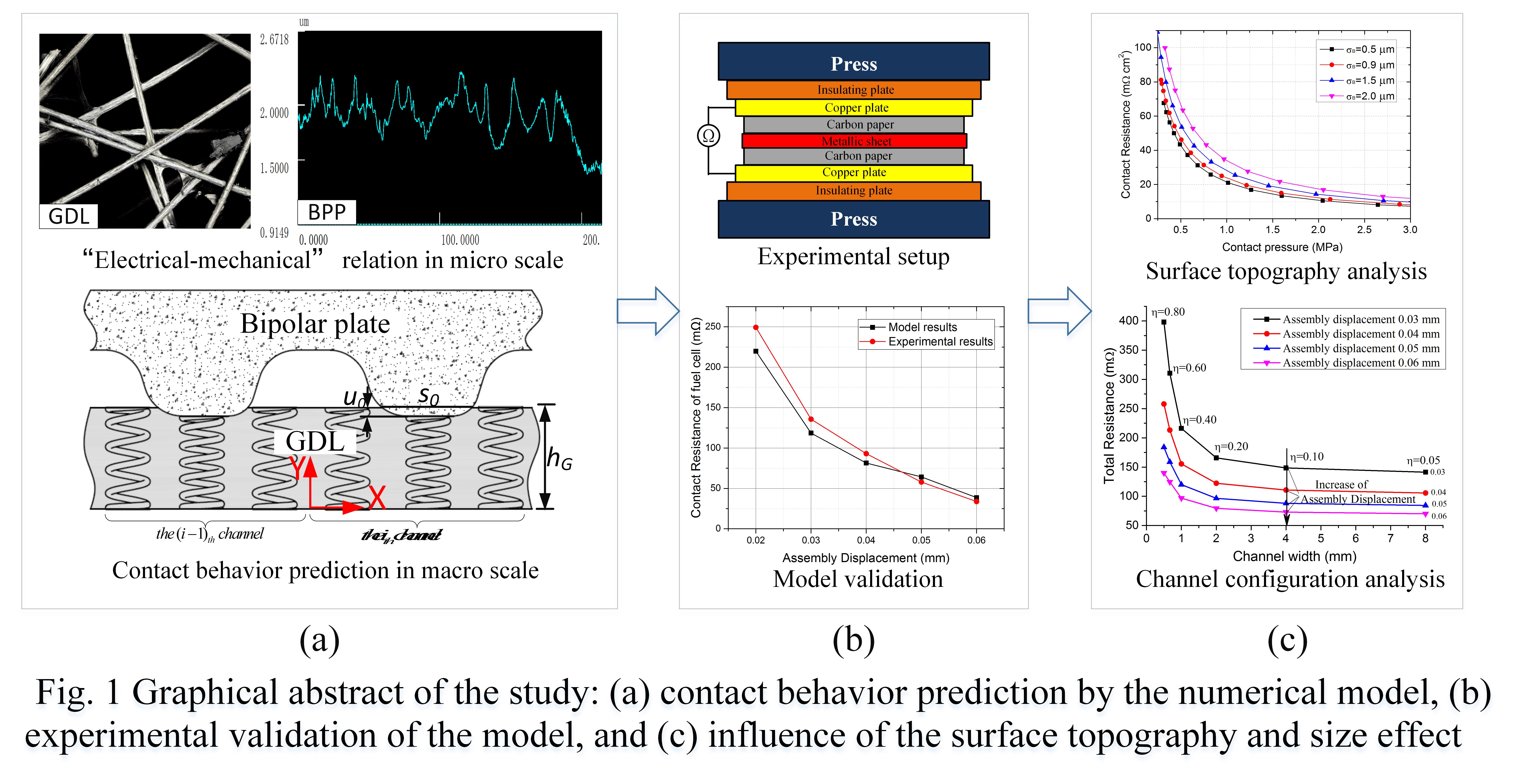