National Harbor 14 (Gaylord National Resort and Convention Center)
F. Zhu, Y. Jiang, and S. Sun (Department of Chemistry,Xiamen University)
New energy resources such as direct ethanol fuel cell (DEFC) play an important role in both reasonable use of resources and environment protection which are the two vital issues of sustainable development. The development of DEFC has been limited even though ethanol has several important advantages as a fuel. So far, Pt has been identified as the most active electrocatalyst to catalyze ethanol oxidation. However, it is difficult for Pt to break the C-C bond in ethanol which means complete oxidation of ethanol and obtain 12 electrons from each ethanol molecule. On the contrary, it always undergoing the 4 electrons pathway which means no C-C bond break and low utilization of ethanol.1

To improve the utilization of ethanol, we synthesized several electrocatalysts based on supported PtRh alloy nanomaterials. We find that reduced graphene (rGN) as a support can make PtRh alloy nanoparticles loaded uniformly both in diameter and distribution (as shown in Fig.1a) compared with XC-72 and porous carbon. Pt and PtRh in different molar ratio (3:1, 1:1, 1:2, and 1:3) are investigated for the surface electron effect. Among them, Pt1Rh1/rGN show the ultrahigh mass activity of 0.282 A mgpt-1 at 0.4 V (vs.SCE), which is 2.14 times compared with the commercial Pt/C. The integrated intensity of Peak1 can be considered as the standard for evaluating the ethanol oxidation activity in acid medium. The value is respectively 0.1299 and 0.0737 on Pt1Rh1/rGN and commercial Pt/C, and has shown a promotion of 76.3% (as shown in Fig.1c). For better understanding the superior properties of Pt1Rh1, further investigation is employed. HRTEM result reveals that the supported alloy particles are in cube shape but with high-density step sites around the surface (as shown in Fig.1b). Comparinig this structure with cubic PtRh catalysts proposed by our former research, we can draw the conclusion that the surface high-density step sites are crucial for C-C bond breaking.2 In-situ MS-FTIR spectroscopy (MS-FTIR) are also used to study ethanol oxidation on Pt1Rh1 and commercial Pt/C. It can be seen from Fig.1d that the CO peak intensity (around 2050 cm-1) is obviously weaker but peak intensity of CO2 (at 2345 cm-1) is much stronger under the same potential for Pt1Rh1, which confirmed that the addition of Rh not only promote the C-C bond breaking but also reduced the adsorption of poisoning species. After comparing the integrated CO2 peak intensity which is a direct evidence for C-C bond breaking, we can find that Pt1Rh1 can break the C-C bond even at such a low potential at -50 mV, which shows a large potential reduce of 200 mV compared with Pt/C which is rarely reported.

The investigation indicates that high mass activity and efficient C-C bond breaking Pt1Rh1/rGN catalyst toward ethanol oxidation is due to the uniformly small diameters and distribution of alloy Pt1Rh1 nanoparticles on rGN. 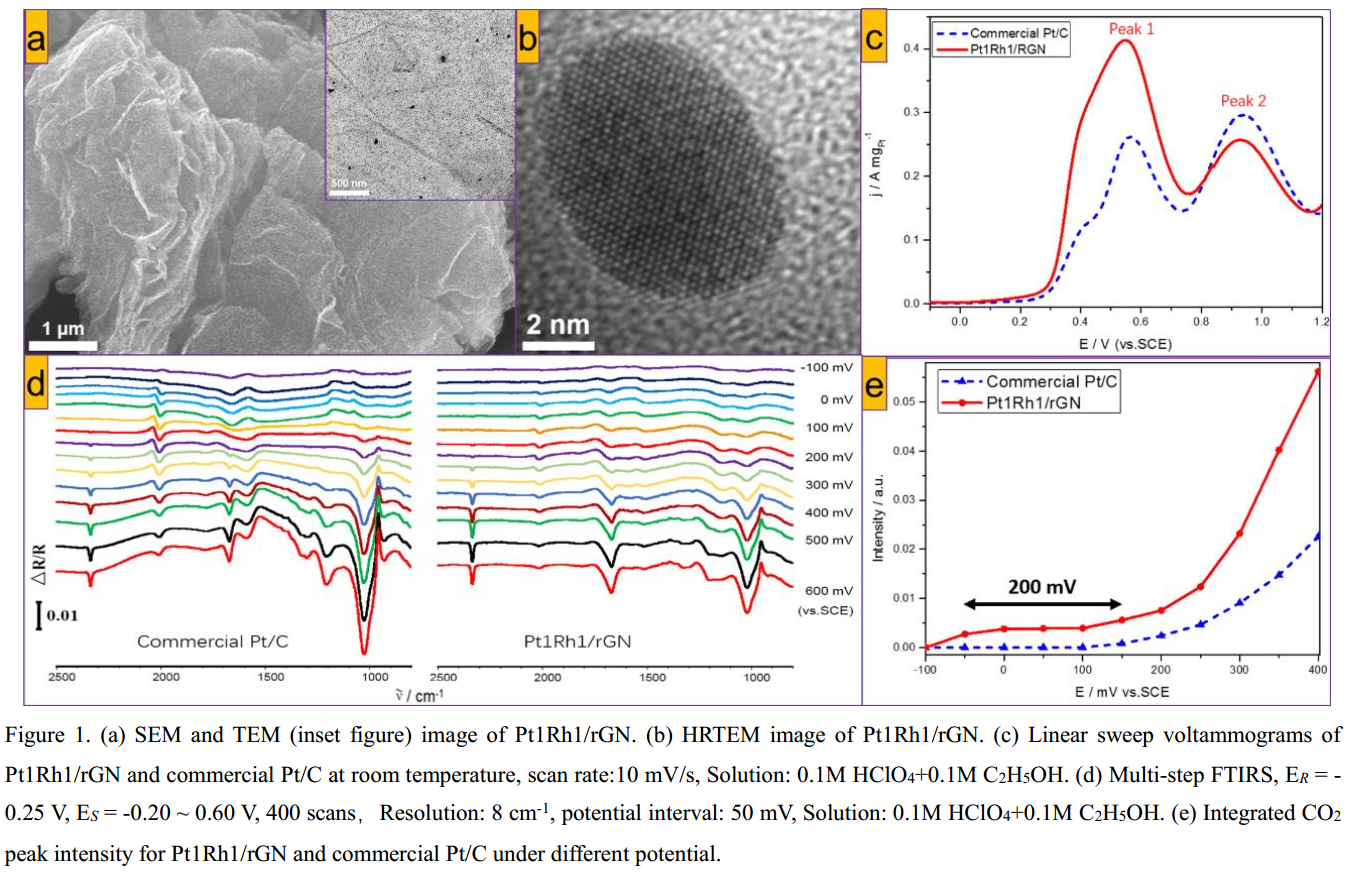