National Harbor 14 (Gaylord National Resort and Convention Center)
D. J. Pereira, C. H. Wilkins, S. Shimpalee, and J. W. Weidner (University of South Carolina)
A methodology for the electroless deposition (ED) of ruthenium (Ru) on a commercial, carbon-supported Platinum (Pt) catalyst has been developed for electrochemical and fuel cell applications [1, 2]. Several different bimetallic catalysts composed of Pt and Ru have been produced using this methodology with promise of having better catalytic activity. Figure 1 shows how the SEA/ED method produces a finer, more evenly dispersed bimetallic distribution with less monometallic clustering [1]. These bimetallic catalysts have shown higher activities compared to both commercially-available Pt-Ru/C catalysts and monometallic Pt or Ru catalysts [3, 4]. This method’s bimetallic catalyst is proven to show better resistance to CO poisoning as well [3, 5, 6]. In application, this Pt-Ru/C catalyst has promise to be an optimal catalyst for use in a Direct Methanol Fuel Cell (DMFC).

The objective for this study is to test the performance of the new Pt-Ru/C catalyst within a DMFC and compare the results to the commercially-available catalyst. This includes synthesis of the SEA/ED, Pt-Ru/C catalyst, characterization of the commercially-available and newly-synthesized catalyst with analysis, and finally, testing of each catalyst within a DMFC testing station and analyzing performance results. The DMFC testing and comparison is important to help show the catalysts’ real-world performance as well as effects of possible CO-poisoning during operation. The newly-synthesized catalyst has an increased electrochemical area as well as a better bi-metallic dispersion, to allow ruthenium to better prevent any platinum from being poisoned, causing the catalyst to perform better and last longer. 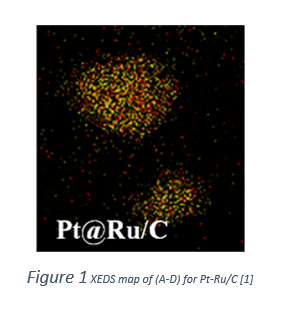