Maryland A (Gaylord National Resort and Convention Center)
Z. Ahmad and V. Viswanathan (Carnegie Mellon University)
The study of dendritic growth and roughening during electrodeposition has gained renewed interest in light of the safety concerns associated with dendritic shorting in the current Li-ion batteries. A precise understanding of the growth of dendrites during electrodeposition could enable the use of metal anodes, especially Li, which could lead to significantly higher energy density batteries. Solid electrolytes present a new avenue for attacking this problem of stable electrodeposition, besides improving the safety of energy storage technology. Replacing the organic liquid electrolyte by a solid electrolyte creates a solid-solid interface whose properties alter the kinetics of electrodeposition. Monroe and Newman analyzed the electrodeposition stability of Li/solid polymer electrolyte system within linear elasticity theory and showed using a kinetic model that solid polymer electrolytes with a sufficiently high modulus are capable of suppressing dendrite growth [1]. However, the propagation of the interface is often accompanied by a change in density of the metal which is thus, an important order parameter that should affect the stability of electrodeposition at the interface. In the theory of stress-driven phase transformation at solid-solid interfaces studied in geological systems, it has been shown that interfacial stability or roughening condition depends on the density change at the interface [2].

Recently, the high anisotropy of Li was proposed to play an important role in determining stability of electrodeposition at different Li surfaces [7]. To investigate anisotropy effects, we performed linear stability analysis of electrodeposition at different metal surfaces in contact with solid electrolyte. The deformation equations were solved using the Stroh formalism with the same boundary conditions. Results show that both high density and low density stable regimes exist, with the critical shear modulus curves shifted depending on the Li surface in contact with the solid electrolyte. This presents an opportunity to realize safer high energy density solid-state batteries with metal anodes.

Figure 1: Stability diagram showing stable and unstable electrodeposition regimes depending on shear modulus and molar volume ratio of metal [3]. Change in the critical shear modulus curves due to Poisson's ratio is also shown. 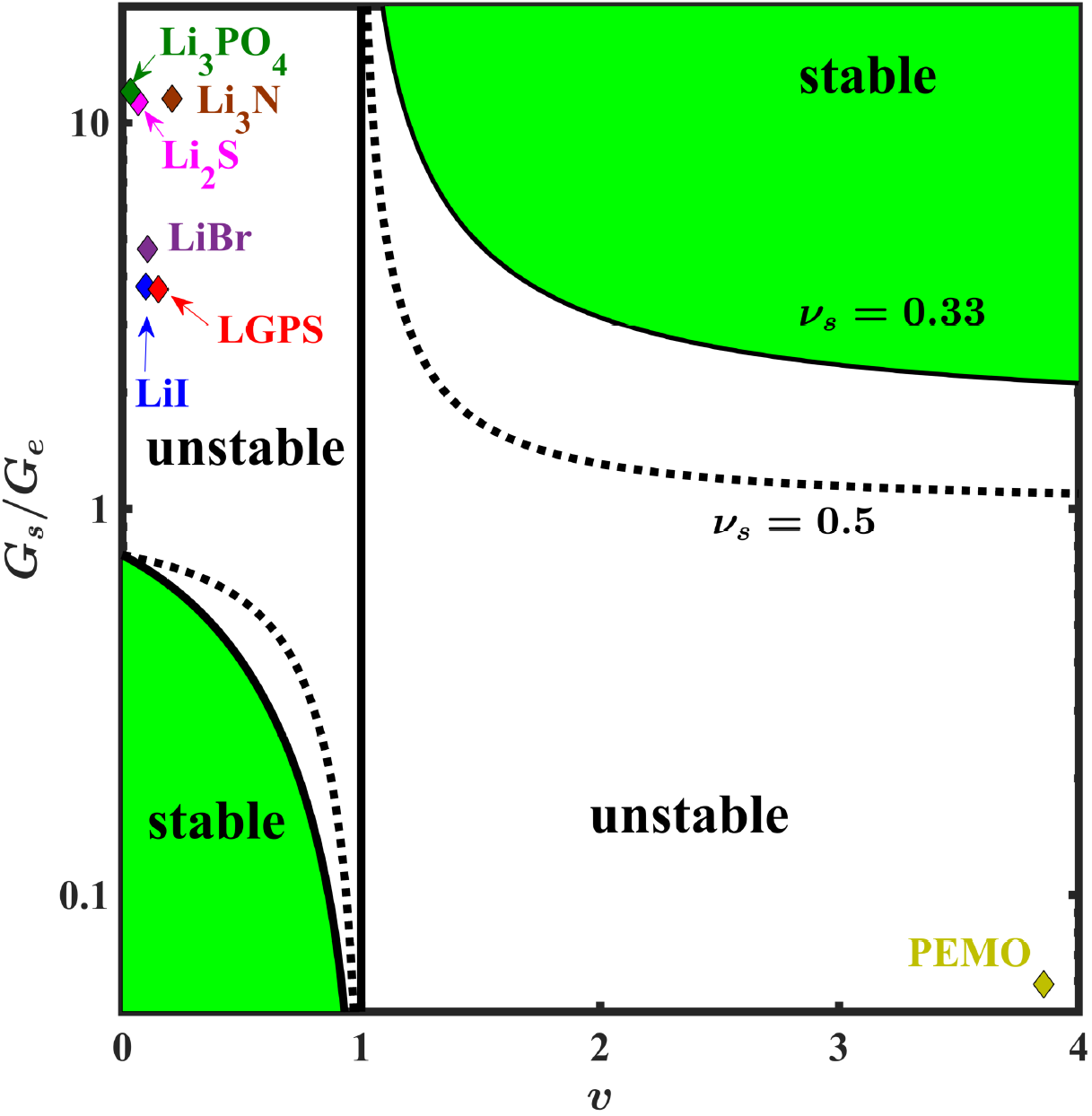