National Harbor 15 (Gaylord National Resort and Convention Center)
M. Mandal, A. Valls, N. Gangnus, and M. Secanell (University of Alberta)
A critical aspect determining catalyst utilization of polymer electrolyte fuel cells (PEFC) and electrolzyer cells (PEECs) is the membrane electrode assembly (MEA) fabrication method. Over the past two decades, a variety of membrane electrode assembly and catalyst coated membrane (CCM) methods have been explored in the literature including wet and dry spraying, ultrasonic spraying, doctor blade followed by decal transfer, screen printing, magnetron sputtering, electro deposition, electro spraying and electrophoretic deposition. A promising approach for CCM fabrication is inkjet printing because the method, based on drop-by-drop deposition, allows for accurate deposition control enabling the fabrication of low loading [1], conventional loading [2] and patterned electrodes [3]. Further, the method results in very low catalyst waste. Inkjet printing was first explored by Towne et al. [4] and Taylor et al. [5], followed by Saha et al. [6]. More recently, Shukla et al. demonstrated one of the highest mass activities in the literature using low loading electrodes manufactured using this method [1]. Despite these promising results however, the use of inkjet printing for the manufacture of polymer electrolyzer cells has not been reported in the literature. The goal of this article is therefore to analyze the use of inkjet printing for the manufacturing of polymer electrolyte electrolyzer cells. Given that the anode of a polymer electrolyte electrolyzer is commonly based on iridium black, the ink composition and fabrication is substantially different than for fuel cells.

In order to fabricate the catalyst coated membranes, an anode catalyst ink is prepared by dispersing 44.7 mg of iridium(IV) oxide powder (99%, Alfa Aesar) in a dispersion media, stirring in an ultrasonic bath, and then adding 99.3 mg of Nafion solution (5%wt., Ion Power). The anode ink is then deposited layer-by-layer using the inkjet printer until a catalyst loading of 1.03 mgIrO2 /cm2 is achieved (about 15 layers). The cathode ink is prepared using the method described in ref. [1] and deposited onto the membrane to achieve a loading of 0.1 mgPt/cm2. For this study, N211 and N117 membranes were used to make the electrolyzer CCMs. A titanium mesh was used on the oxygen (anode) side whereas a Sigracet SGL 24BC gas diffusion layer (GDL) was used on the hydrogen (cathode) side. In order to characterize the cell, an in-house electrolyzer testing facility was developed. The electrolyzer hardware consisted of two single serpentine plates, a titanium plate in the anode and a graphite plate in the cathode and heated end plates, which were maintained at 80oC. Deionized water at 80oC and a flow rate of 9.1 ml/min is circulated through the cell using peristaltic pump and the cell was operated at atmospheric pressure.

The anode catalyst layer (CL) morphology were analyzed using scanning electron microscopy (SEM) for surface and thickness characterization. The attached figure shows the CL is uniform, well adhered to the membrane and thickness of 2.66 μm. Electrochemical performance tests were also performed (shown in the attached figure). The catalyst coated electrolyzer membranes fabricated could generate 1 and 2 A/cm2 at potentials of 1608 mV and 1701 mV respectively using a Nafion N-211 membrane. Using N117, the same current densities were obtained at 1746 mV and 1972 mV. These results are comparable to previous results in the literature (shown in the figure). The achieved performance is comparable to some of the best results reported in the literature, e.g., Xu et. al. [7] reported potentials of 1640mV and 1740 mV at 1 and 2 A/cm2, respectively, using an MEA with 1 mgIrO2 /cm2 IrO2 catalyst on N212. Hydrogen crossover, cyclic voltametry (CV) and electrochemical impedance spectroscopy (EIS) tests were also performed. The hydrogen crossover for N211 and N117 membranes were 4.51×10−9 and 6.29×10−10 mol.cm−2.s−1 respectively. The RPEM and Rct at 1A were 0.08 and 0.215 ohms.cm2 for the N211 cell and 0.201 and 0.35 ohms.cm2 for the N117 cell. These results suggest that inkjet printing can be used to fabricate electrolyzer electrodes with low loading, good performance and minimal wastage of catalyst. 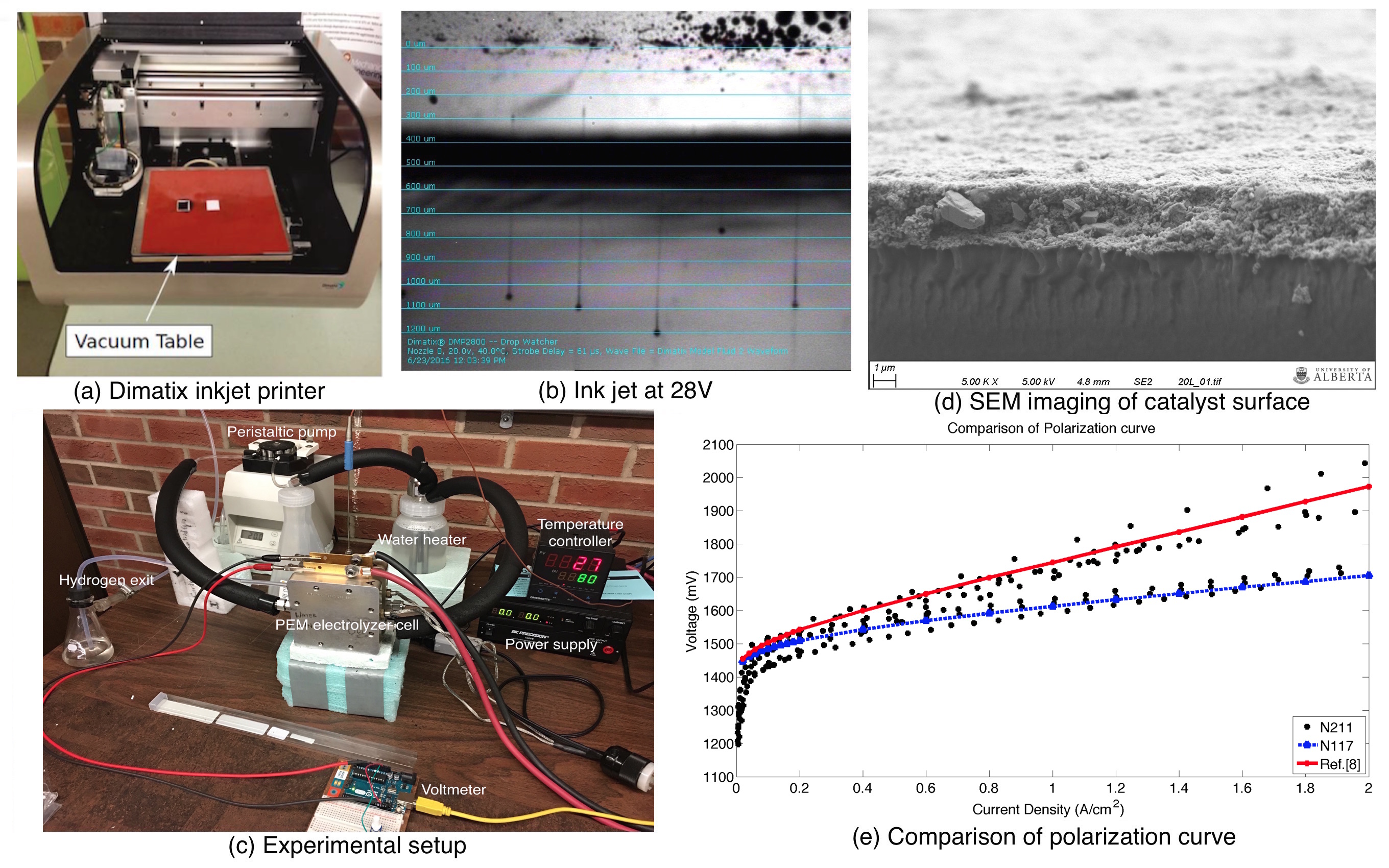