Chesapeake 6 (Gaylord National Resort and Convention Center)
J. P. Zheng, A. Shellikeri (Florida State University), J. S. Zheng (Tongji University), M. A. Hagen, S. Yturriaga (Florida State University), J. A. Read, and T. R. Jow (U.S. Army Research Laboratory)
Lithium (Li)-ion battery (LIB) and electric double-layer capacitor (EDLC) are two widely used electrochemical energy storage devices. LIB is made with Li intercalated graphite anode and Li metal oxide cathode and EDLC is made with high surface activated carbon for both anode and cathode. To compare two energy storage devices, LIB has a higher specific energy (or energy density) than EDLC, but has low specific power (or power density) and poor cycle life than EDLC as shown in Fig. 1. In high energy and low power applications, the LIB is the best choice; in high power and long cycle applications, the EDLC is used; however, in many applications, the power requirement is not a constant but rather spans over a range of power levels. It has been demonstrated that when batteries and supercapacitors were externally connected to form a hybrid power source, the voltage drop during the pulsed current for the hybrid power source was less than that for the battery, and operating time of the hybrid power source was significantly extended [1,2]. However, because the maximum cell voltage of single cell EDLC is less than that of LIB; therefore, hybrid power sources could only be made with two separate battery and EDLC cells and electrically connect them with or without electric circuits.

The Li-ion capacitor (LIC) is a new energy storage device which consists of an EDLC cathode and a LIB anode, between which the ions shuttle during charge and discharge processes. The LIC not only retained all the advantages of EDLC such as specific power >5 kW/kg and cycle life > 100,000 cycles; but also had higher specific energy of 15-30 Wh/kg and higher maximum cell voltage of 4.1 V than that of EDLC [3,4]. Because the potentials of anode and cathode as well as the maximum cell voltage of LIC is comparable to that of LIB, it allows the LIC and LIB to be assembled in one package as a monolithic LIB and LIC hybrid cell.

Very recently, we have demonstrated a new hybrid energy storage device that combines the advantages of both the LIB and the LIC, thereby avoiding their inherent defects, while bridging the gap between the high energy densities offered by batteries and the high power densities seen in LIC as shown in Fig. 1. The energy density and power density of the hybrid cell can be designed to meet the requirements by a reasonable distribution of the ratio between LIB and LIC electrode materials in the internal hybrid cell. For example, in a LIB/LIC internal hybrid cell, made with a 20 wt.% LiFePO4 (LFP) and 80 wt.% activated carbon (AC) mixed cathode and a pre-lithiated hard carbon anode, the specific energy increased by 40% to compare with LIC. As can be seen in Fig. 2(a), the discharge profile can be divided into two parts: at cell voltage range of 2.2-3.0 V and 3.3-3.8 V, the capacity was contributed by capacity material, while at 3.0-3.3 V, it was contributed by battery material. It can also be seen from Fig. 2, that the capacity contribution by capacitance material was less sensitive than battery material when the discharge rate increased from 0.1C to 53C. Fig. 2(b) shows the charge-discharge voltage profiles measured at an interruption rate of 0.2C as a function of cycle number after the hybrid cell was cycled at 43C rate. It must be notified that cycle life of the hybrid energy storage cell was found to be prolonged significantly as shown in Fig. 2(c). After 20,000 cycles, the degradation of specific capacity for both capacitance and battery materials inside hybrid cell was less than 5%. As a comparison, the specific capacity of a battery cell using LFP cathode, as a control experiment, decreased by 40% after 2,000 cycles. 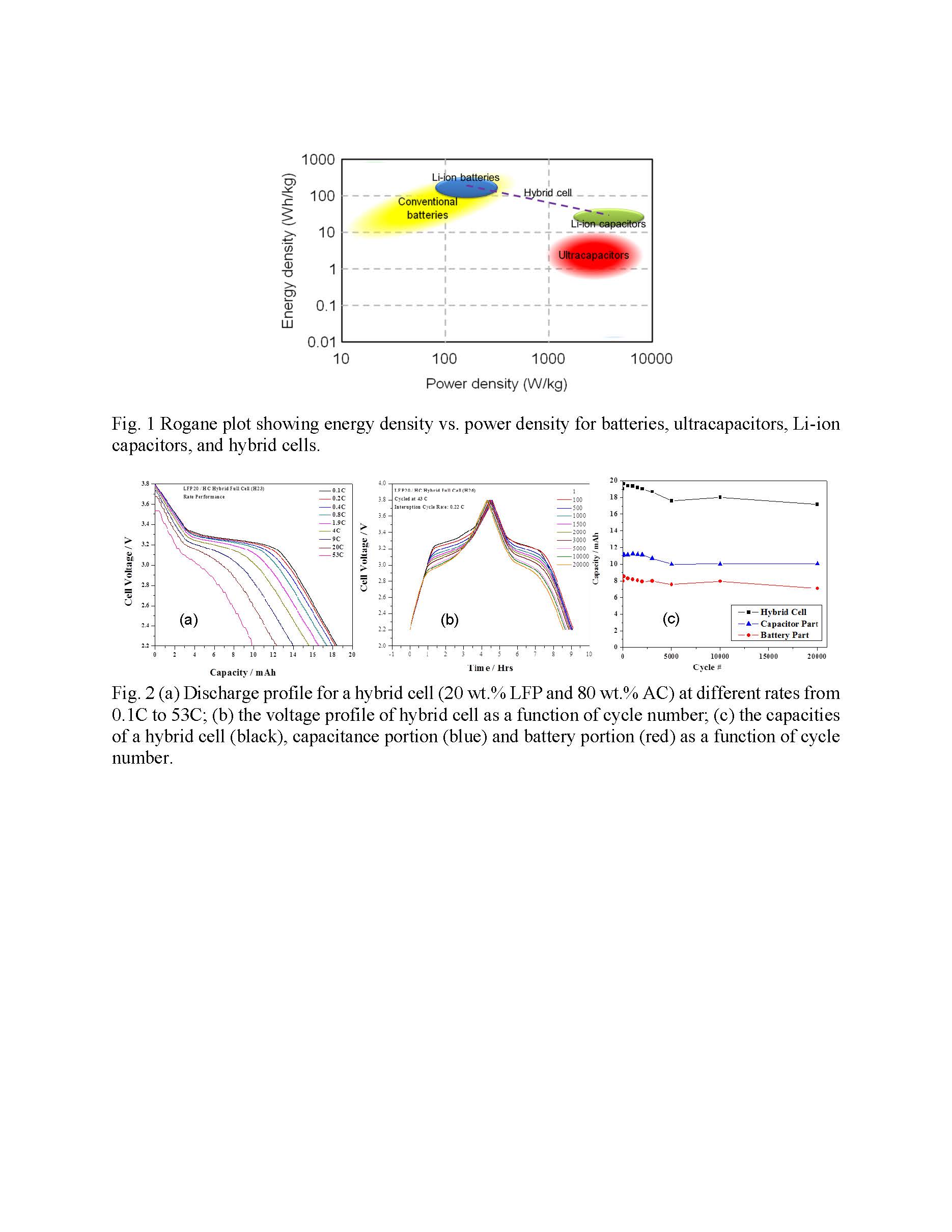