Prince George's Exhibit Hall D/E (Gaylord National Resort and Convention Center)
J. Lamb and P. Andrei (FAMU-FSU College of Engineering)
Recently, we have proposed a robust and computationally efficient numerical algorithm for the optimization of 2-D and 3 -D catalysts distributions in Proton Exchange Membrane Fuel Cells (PEMFCs) using a gradient-based technique [1-3]. The algorithm is based on the computation of the catalyst sensitivity functions of the cell current and cell voltage by using the adjoint method. This method was initially developed by the applied mathematics community to solve optimization problems in fluid dynamics, climate, and heat transfer problems and, later, by other research groups to solve optimization problems in magnetics, model parameter determination, and semiconductor devices [4-6]. It was only recently that COMSOL, a popular finite element solver, has introduced the adjoint method, which has started to be used by the electrochemical community for calculation of sensitivities of platinum distribution in PEMFCs [7,8].

In this presentation we analyze the cell current, cell voltage, and spectral electrochemical impendence properties of PEMFCs by using the catalyst sensitivity functions of cell voltage, γPt(r). These functions show how much the cell voltage is increasing by adding 1 unit amount of platinum at a given location inside the catalyst layer (and assuming the cell is operating at the same current density). For instance, the figure below shows the 2-D catalysis sensitivity functions of the cell voltage for two cells with membrane thicknesses of 60 mm and 25 mm, in which the catalyst is distributed uniformly inside the cell. It is apparent from these figures that in order to increase the cell voltage and consequently the power of the cell, one needs to increase the concentration of Pt particles in the regions under the oxygen openings. As it will be shown at the conference the optimum catalyst distribution also depends on the operating temperature, catalyst and gas diffusion layers porosities, Nafion content, and cell current.

In addition to the above analysis, we will also introduce a technique for the analysis of variability of polarization curves induced by the randomness of pore sizes and pore shapes in the catalyst and gas diffusion layers in PEMFCs. The technique is based on the evaluation of sensitivity functions of the cell voltage and can also be extended to the analysis of variability induced by the random platinum distribution in the catalyst layers (which is assumed to have a uniform random distribution). More details about the method for the analysis of variability effects, as well as about the numerical implementation of the adjoint method in the case of finite element simulations and its computational efficiency will be presented at the conference. 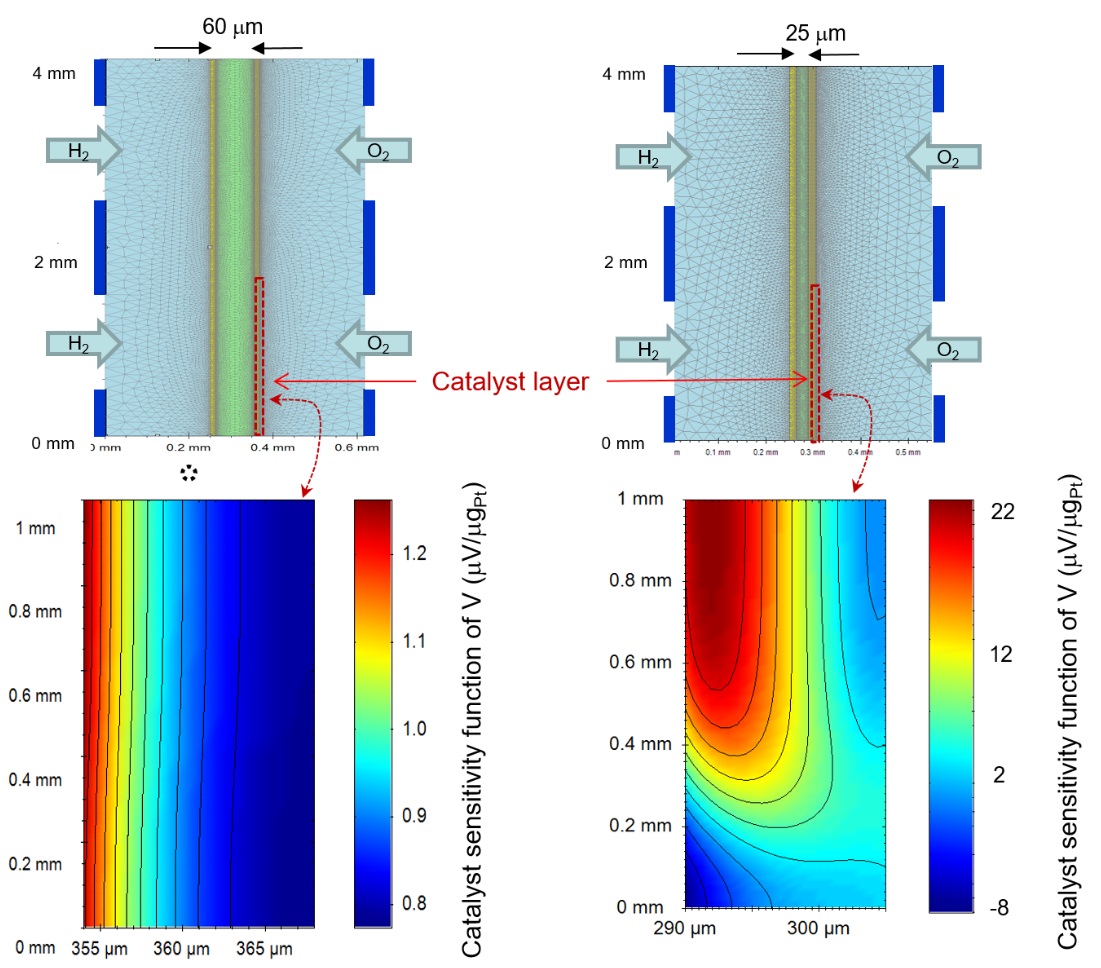