Optimizing a cathode catalyst layer (CL) of a PEFC is required for efficient use of Pt since Pt electrocatalysts account for a large percentage of the stack cost. The oxygen reduction reaction (ORR) rate is a function of the oxygen partial pressure and the cathode electromotive force (emf).[1, 2] The proton potential and the oxygen partial pressure are not constant throughout the cathode thickness due to the transport resistances. In modeling the PEFC cathode, formulation of the intrinsic ORR rate which is not affected by the transport resistances is required.[2] In our previous study, the proton transport resistance in the through-plane direction still remained under low humidity conditions even if the CL thickness was reduced to 3 μm.[3] In this study, Pt was sputter-deposited directly on a microporous layer (MPL) made of carbon black and PTFE, thus preparing an ultra-thin cathode without ionomer. For the purpose of the analysis of the intrinsic ORR rate, effectiveness of the ultra-thin sputter-deposited cathode was investigated.

A two-layer MEA consisting of a Nafion membrane (DuPont NR-212) and an anode CL made of Pt/carbon black (Vulcan XC-72) catalysts covered with ionomer was prepared. The weight ratio of Pt/C was 0.5, the Pt loading was 0.30 mg/cm2, and the ionomer/carbon black was 0.74. As for a cathode, Pt was sputter-deposited on an MPL coating carbon paper using sputtering apparatus (AOV, SPAD-4240UM) having a 0.032 m3 deposition chamber. 20 W of 13.56 MHz radio frequency power was supplied to generate plasma for sputtering. The distance between the Pt target and the substrate was 130 mm and the diameter of the target was 50.8 mm. Pt was deposited at 5.0 Pa in a 20 cm3(STP)/min of Ar flow. The substrate temperature was 100 ˚C. The deposition time was 1, 2, 3, and 10 min for varying Pt amount, yielding the Pt loading of 0.0013–0.013 mg/cm2. This cathode was stacked with the two-layer MEA. The geometric active area was 50 mm × 50 mm.

Fig. 1 shows polarization curves measured using ultra-thin cathodes. Fig. 2 shows Tafel plots in cases of usual Pt/C CLs. The apparent Tafel slope was 0.036–0.049 V depending on the CL thickness of 4.0–24.2 μm. IR-corrected cell voltage was obtained using the membrane resistance measured as high frequency resistance. At a same current density, as the CL becomes thicker, the ohmic proton potential drop through the cathode becomes greater due to the proton transport resistance in the through-plane direction. As a result, the cathode emf at a CL–GDL boundary becomes higher than the membrane-IR-corrected cell voltage. The true cathode emf is the higher at the higher current density. That is why the apparent Tafel slope increases by increasing the CL thickness.

An ultra-thin cathode was prepared by sputter deposition of Pt directly on an MPL for the analysis purpose. The observed Tafel slope on this cathode was equal to that at the zero cathode CL thickness expected from a trendline of the apparent Tafel slopes measured with the usual Pt catalyst supported on carbon black. This indicates that the intrinsic ORR rate which was not affected by the transport resistances was obtained by using the proposed Pt-sputtered cathode. 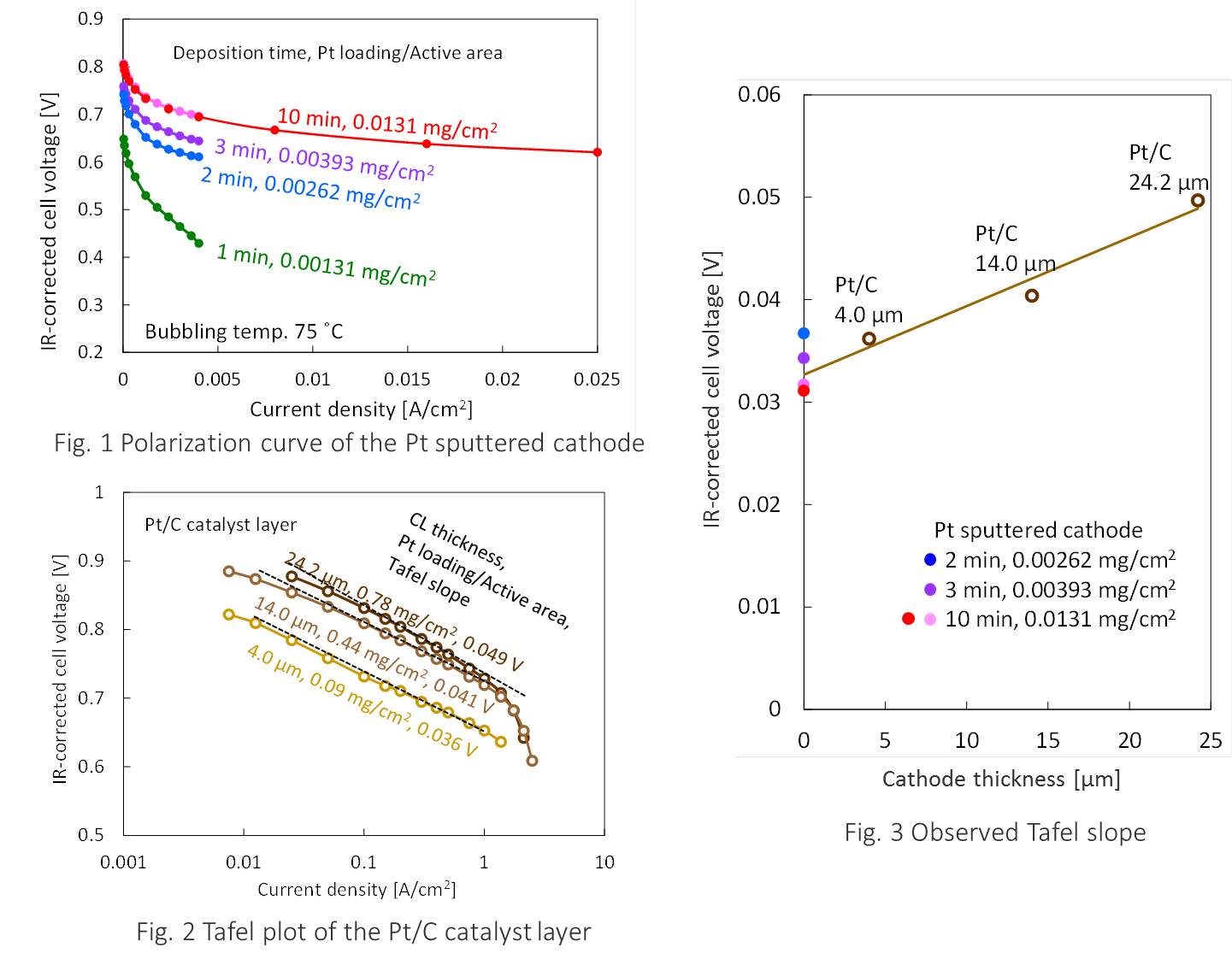