Prince George's Exhibit Hall D/E (Gaylord National Resort and Convention Center)
R. Kobayashi, K. Kakinuma, A. Iiyama, and M. Uchida (Fuel Cell Nanomaterials Center, University of Yamanashi)
Pt or PtCo alloys supported on carbon (Pt/C or PtCo/C) are commonly used as cathode catalysts for polymer electrolyte fuel cells (PEFCs). The carbon support degrades at high potential and during startup/shutdown (SU/SD) cycles. The degradation leads to the aggregation and detachment of Pt and decreases the cell performance. We synthesized a non-carbon support, Nb-doped tin oxide (Nb-SnO2), which has a fused aggregate network structure, by use of a flame oxide synthesis method, and loaded the Pt catalyst on the Nb-SnO2 support (Pt/Nb-SnO2) by use of a colloidal method. The Pt/Nb-SnO2 catalyst has high activity for the oxygen reduction reaction and high durability versus the SU/SD process compared with Pt supported on graphitized carbon black (Pt/GCB).1-4 In this research, we evaluated the cell performance and load cycle durability for membrane electrode assemblies (MEAs) using Pt/Nb-SnO2 cathode catalyst layers (CL) with various ionomer contents.

The Brunauer-Emmett-Teller (BET) surface area of the Nb-SnO2 support was 228 m2 cm-3. The Pt loading amount of the Pt/Nb-SnO2 cathode was 0.05 mg cm-2. The cell performances were evaluated under H2/air at 80% RH and 80 ℃. The cell durability was evaluated by use of simulated load cycling with potential steps (0.6~1.0 V vs. RHE; holding time, 3 s at each potential), which was developed by the Fuel Cell Commercialization Conference of Japan (FCCJ). The ionomer contents (ionomer/support volume ratio, I/S) of the each cathode CL were varied as follows: 0.12, 0.24, 0.45 and 0.67. We also evaluated the cathode CL using Pt/GCB (I/S = 0.7, optimized ratio; BET surface area of GCB, 325 m2 cm-3) as a reference. The Pt particle sizes and the cross-sectional images of the MEA before cycling and after 50,000 cycles of simulated load cycling were analyzed by use of scanning transmission electron microscopy (STEM, HD2700, Hitachi High Technologies Co.).

The initial cell performances and those after 50,000 simulated load cycles are shown in Fig. 1. The initial mass activity at 0.80 V (Fig. 2) and current density at 0.60 V (Fig. 3) improved with decreasing I/S and reached a maximum at I/S = 0.12. The optimized I/S for Pt/Nb-SnO2 was quite different from that for Pt/GCB. The electrochemical surface area of Pt on Nb-SnO2 was much higher than that on GCB. The images of transmission electron microscopy with low acceleration voltage indicated that the Nafion ionomer was uniformly covered on the surface of Pt/Nb-SnO2 in comparison with that on Pt/GCB. The results suggested that the optimum value of I/S varies with both hydrophilicity and surface area of the support.

After 50,000 load cycles, the current density for the cell using the Pt/Nb-SnO2 cathode CL (I/S = 0.12) at 0.60 V was 2.5 times higher than that for Pt/GCB (I/S = 0.7), as shown in Fig. 1. The Pt particles on the Nb-SnO2 cathode CL after the 50,000 cycles maintained their high dispersion, while those on GCB became aggregated. It was detected from the STEM images that the orientations of the Pt particles were arranged according to those of the Nb-SnO2. The strong chemical bonding would mitigate the migration of Pt particles and would prevent the degradation of the Pt/Nb-SnO2. Moreover, no Pt band was observed in the membrane after the load cycling in the MEA using the Pt/Nb-SnO2 cathode, while a band was observed in the MEA using Pt/GCB (I/S = 0.7). These results also suggest that the differences of surface properties between Nb-SnO2 and GCB would affect the Pt dissolution, prevent the formation of Pt bands in the membrane, and would also contribute to the improvement of the durability.

This work was supported by funds for the “SPer-FC” project of the New Energy and Industrial Technology Development Organization (NEDO) of Japan. 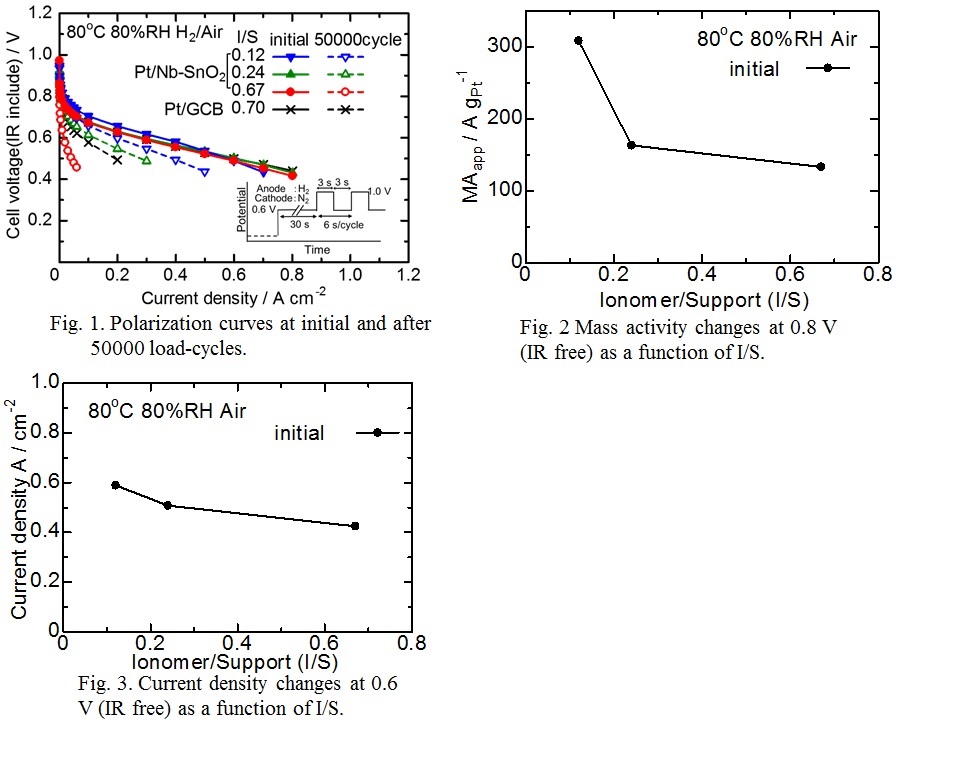