Prince George's Exhibit Hall D/E (Gaylord National Resort and Convention Center)
B. R. Hsieh (EnCap Energy Inc.)
Although SCs (Fig. 1a) are known for their very high power density, very long cycle life, and being relatively innocuous, their energy densities are about 10 - 25X lower as compared to lithium ion batteries (LIBs). Despite this shortcoming, replacement of traction LIBs with SCs in hybrid electric vehicles is now commonplace but the opposite is not. However, SCs have rather long road ahead. For example, the specific energy of the recently launched Maxwell 2.85V DuraBlue SC cell is only 7.7 Wh/kg which is one fourth of that for the lead acid batteries (35 Wh/kg), the capacity target for the next generation of SCs. Recently, graphene or activated carbon based microsupercapacitors having planar interdigitated electrodes and current collectors (Fig. 1b) showed high energy densities rivaling or surpassing those of thin film LIBs and lead acid batteries were reported by several groups [1]. These results gave us a glimpse of the possibility of competing with LIBs in both consumer electronics and EVs in the future and inspired us to invent new planar SC designs in order to achieve even higher energy density.

The first question we asked was "Is the MSC design shown in Fig. 1b scalable?" And our initial response was “unlikely” because the driving force for ion movement between the positive and negative carbon electrodes is limited to the relatively weak fringe electric field (shown as the yellow dash lines in Fig. 1b) which cannot effectively drive the ion movement through the entire thickness of the carbon electrode (t2) as it increases into the micron range.

In order to overcome the lack of driving force for facile ion movement, we came up with several new designs in a recent patent application [2]. One of them is shown in Fig. 2 as an example, wherein the current collectors are coated on the sidewalls of the carbon electrodes and gives raise to the direct electric field, as indicated by the purple arrow. In this presentation we will discuss other planar designs, their corresponding pack designs, as well as low cost fabrication methods involving printing processes. 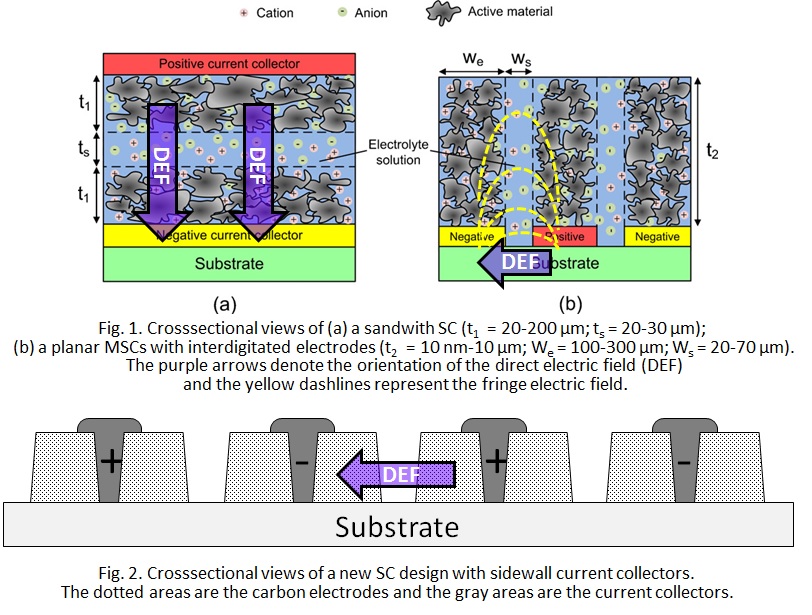