Prince George's Exhibit Hall D/E (Gaylord National Resort and Convention Center)
H. Thuv, M. Augustin, and A. M. Svensson (Norwegian University of Science and Technology)
Lithium is the desired material for the negative electrode in Li-O2 batteries due to its high specific capacity and low electrochemical potential.[1] The main challenges with rechargeable metallic Li electrodes are poor cycling behaviour due to dendritic/mossy deposits and low current efficiency caused by side reactions.[2] These problems are intimately linked with the properties of the solid electrolyte interphase (SEI), which forms spontaneously on the Li surface in contact with the electrolyte, and kinetically hinders further Li corrosion. Thus, tailoring the electrolyte composition, and hence the composition and properties of the SEI can improve the performance of Li electrodes.[3, 4].

In this work, Li metal anodes were studied in combination with solvents relevant for Li-O2 batteries, e.g. tetraethylene glycol dimethyl ether (TEGDME) and dimethylsulfoxide (DMSO). LiTFSI and LiFSI have been proposed as compatible salts for these solvents in Li-O2 batteries. LiNO3 is another promising candidate for Li metal batteries, and is expected to give a more stable SEI and thus allow for the use of more reactive solvents like DMSO. [5-7]

Electrochemical plating and stripping of Li in Li/Cu cells were conducted in electrolytes containing the salts LiTFSI, LiFSI and LiNO3 in combination with DMSO and/or TEGDME solvents, and compared to a conventional Li-ion battery carbonate electrolyte (1 M LiPF6 in EC:DMC). In the cells with the TEGDME- and DMSO-based electrolytes, addition of LiNO3 significantly improved the current efficiency (CE) compared to cells with only the LiTFSI or LiFSI salts. Although the performance of Li metal in DMSO is improved, LiNO3 does not provide sufficient passivation as this solvent reacts too vigorously with Li.

Fig. 1 shows the CE of three cells with TEGDME-based electrolytes compared to one with the carbonate electrolyte. The cell with only LiTFSI in TEGDME obtains a CE of only 3 % (yellow), whereas the combination of LiNO3 and LiTFSI (0.5 M of each) in the same solvent, results in a CE of 97 % in the first cycles (blue). By using LiNO3 as the main salt (1 M), the CE is comparable, but the cell suddenly short circuits after only 66 cycles (red). The cells with the TEGDME-based electrolytes containing both LiTFSI and LiNO3 provides a higher and more stable CE in the first cycles than the cell with the carbonate electrolyte, whereas the latter can cycle for more cycles before failure. Electrical impedance spectroscopy (EIS) over several days has revealed that a TEGDME-LiTFSI-LiNO3 electrolyte leads to a higher interfacial resistance on the Li metal than in the EC-DMC-LiPF6 electrolyte, and that the interfacial resistance on Li in the TEGDME-based electrolyte also increases more with time. This could also explain the shorter cycle life of the TEGDME-based cells, as the increased resistance favour dendrite formation.

Further work will include characterization of deposited lithium at different stages during plating, as well as after repeated cycling of the electrodes. This can reveal the morphology of the Li deposition and show how dendrites develop in the different electrolytes, and with the addition of LiNO3. The compatibility of Li with other solvents, e.g. DOL, with Li metal electrodes will also be investigated. 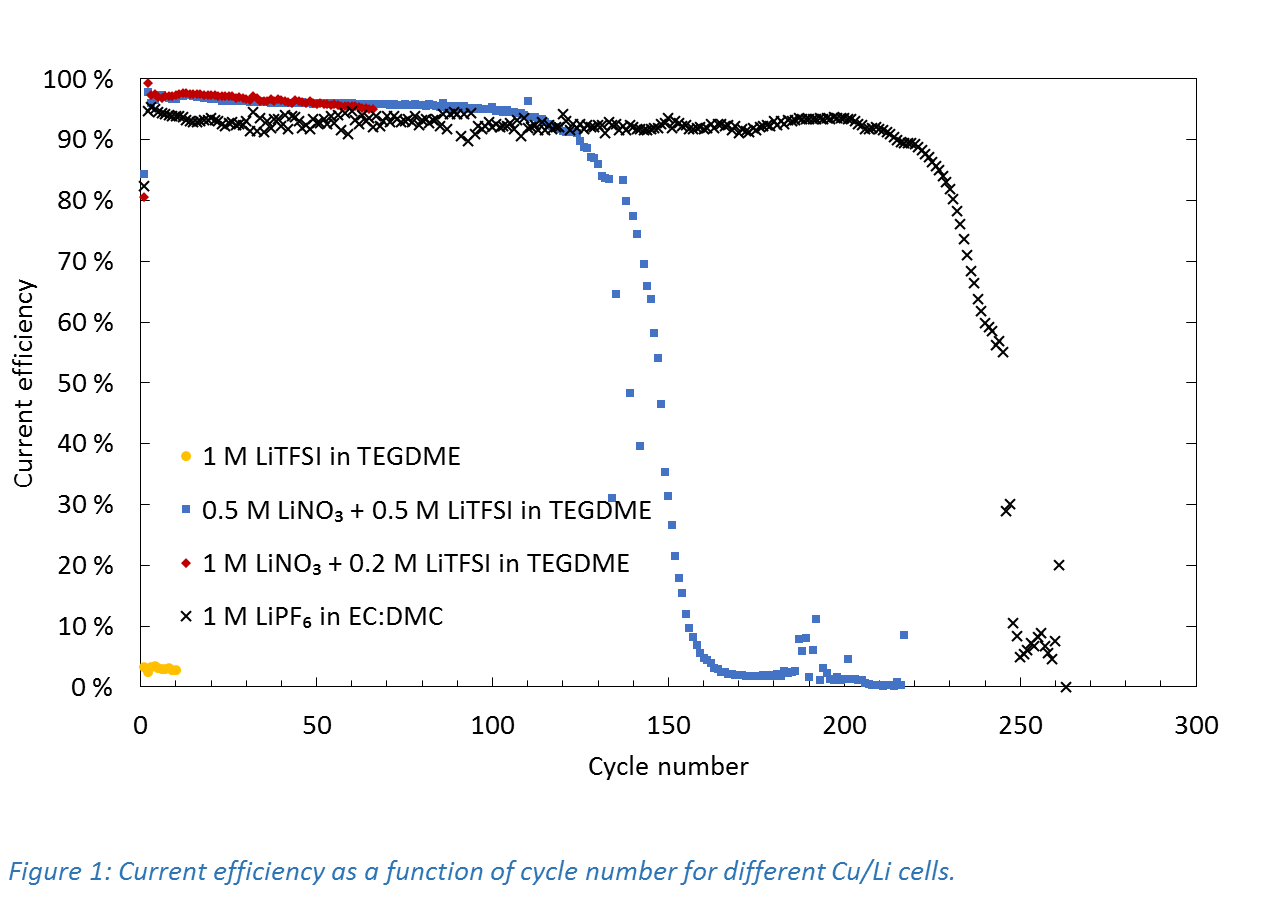