Maryland D (Gaylord National Resort and Convention Center)
K. W. Knehr, S. Biswas, H. Huynh (Princeton University), and D. A. Steingart (MAE/ACEE Princeton University)
The major design criteria for electrochemical energy storage on the grid-scale are low cost and long lifetime. To accomplish this, research efforts have largely focused on the development of low-cost active materials which are incorporated into traditional battery designs. These designs typically contain a considerable amount of passive components that are necessary for extending the lifetime of the battery. For instance, zinc bromine redox flow batteries have been shown to perform with less that 20% capacity fade for 10,000 cycles [1]. However, the cost of this technology (>$200 kWh) is still prohibitive even though the active materials and carbon electrodes only account for ~$8 kWh. The majority of the cost comes from the system level, where complexing agents, separation membranes, and flow systems are used to prevent the corrosive bromine from reacting with the zinc electrode. In light of this fact, our lab has recently developed a minimal architecture zinc-bromine battery (MA-ZBB), which utilizes the same chemistry from commercial zinc-bromine flow batteries, but does not require the need of any passive components, significantly reducing the cost (projected ~$94/kWh) [2]

The original MA-ZBB is composed of two carbon based electrodes, which are spatially separated in the vertical direction, in an aqueous electrolyte containing zinc-bromide salt. The battery does not contain any passive components for controlling bromine/zinc interaction. Instead, the electrodes are vertically separated to utilize the variations in density between bromine and the aqueous electrolyte as an advantage to minimize self-discharge. At the negative electrode on top of the cell, zinc ions are reduced (Zn) and oxidized (Zn2+) on a carbon cloth during charge and discharge, respectively. At the positive electrode, which is located on the bottom of the cell, bromide ions are oxidized (Br2) and reduced (Br-) within a carbon foam electrode.

To date, a proof-of-concept cell on the lab-scale has demonstrated an energy efficiency of over 60% for over 1000 cycles at an energy density of ~10 Wh/L. In this work, we present recent efforts aimed at improving the efficiency and capacity of the system. Galvanostatic intermittent titration technique (GITT) and electrochemical impedance spectroscopy (EIS) are utilized to determine the relative importance of ohmic overpotential, charge transfer overpotential, and mass transport limitations on the performance of the cell. Based on these results, variations in cell and electrode design/materials selection are investigated, which minimize the main sources of overpotential in the system and maximize the cell capacity (Figure 1). 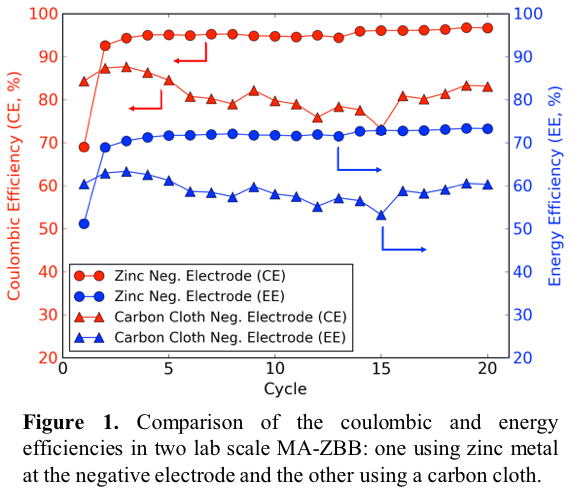