Maryland D (Gaylord National Resort and Convention Center)
Y. Saito, H. Kobayashi, K. Kuratani, M. Shikano (AIST), Y. Nakajima, C. Yamada, M. Kawase, and H. Naito (Japan Aerospace Exploration Agency)
When the lithium-ion batteries (LIBs) are used in the spacecraft such as low-orbit satellite, LIBs in earlier generation are selected because reliability is extremely important and long-term durability test are required to guarantee the life of the batteries. On the other hand, LIBs of high energy density beyond 200 Wh kg-1is also desired to weight saving the spacecraft, which is recently achieved in several LIBs for consumer use. Our goal is development of accelerated life estimation method applicable to such next generation LIBs with high energy density, and in order to understand the degradation mechanism, we are investigating durability test of LIBs. In this work, extraordinary heat generation behaviors appeared in some degraded LIBs is reported.

For the durability test, commercially available 18650 type lithium-ion batteries were selected as the test samples of which nominal capacity was 2900 mAh at 25°C and the energy density was ca. 220 Wh kg-1. The test cells were set in a thermostatic chamber and the temperature was controlled at 25°C. In the test, 0.5C (1.35 A) CC – 4.2 V CV charging for max. 4 h, and 1CCC discharging with 2.5 V cutoff were repeated. The rest times after charge and discharge were 5 min and 10 min, respectively. The test was finish after 870 cycles where the capacity retention of the cells was less than 68%. In the final CV charging process, remarkable rising behaviors were found in both the current and the surface temperature of the same cells. Nonetheless, discharging behavior after the extraordinary charging was general.

After the test, isothermal calorimetry was carried out for the degraded cells in order to analyze the heat generation mechanism. Figure 1 shows the heat flow from the cells during 0.5C CC – 4.2 V CV charging at 25°C. In the fresh cell (a), heat flow was not so large, and the values are same order as that predicted from entropic heat and resistive (including polarization) heat. On the while, extremely large heat generation was observed during CV charging process of the cycled cell (b). The peak value was not steady and it reduced in the next charging. However, after long time rest, it became large again. Note that this unusual exothermal behavior was not remarkable during 4.2 V CV process if the preceding CC process had been low rate such as 0.1C.

After storage at SOC 0% under ambient temperature beyond half year including several weeks storage at 10°C, heat generation behavior of the cell finally changed to curve (c) in the figure, where CC charging continued 4 hours without CV process because the voltage did not reach to 4.2 V.

Finally, evolved gases during charging of the cell were analyzed by gas chromatography after making a cut the case of the cell and sealed in a laminate bag. As the result, evolution of some kinds of gasses such as H2, CO, CO2, and CH4 was confirmed in the highly exothermic region, and consequently, it can be concluded that the electrolyte decomposition with evolution of the gasses proceeded as the side-reaction during charging the degraded cell in the high voltage region, and that the side-reaction was origin of the large heat generation. Essentially, the electrolyte decomposition becomes remarkable when the cell is overcharged. However, in the test sample, this reaction began in the voltage range under normal charging condition. In the cycled cell, enlargement of overvoltage was also observed. This suggested that the interface structure between the electrodes and the electrolyte changed during cycling in the negative way to disturb the charging reaction. From the viewpoint of safety, such kind of degradation is unfavorable, and improvement methods should be considered. 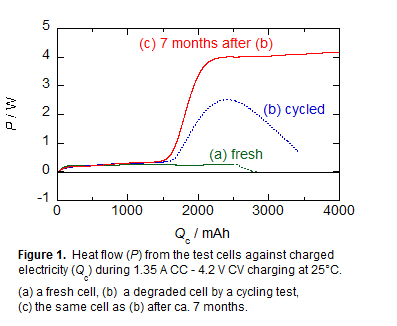