Maryland D (Gaylord National Resort and Convention Center)
J. M. Reniers (University of Oxford), G. Mulder (VITO, Unit of Energy Technology), S. Ober-Blöbaum (University of Oxford), and D. A. Howey (Department of Engineering Science, University of Oxford)
The increased deployment of intermittent renewable energy sources opens up many new opportunities for grid-connected storage units. Lithium-ion batteries offer extra flexibility compared with most other storage technologies but batteries are often found to be too expensive. The lifetime of a battery is a key factor affecting the profitability of battery storage. The lifetime of a lithium-ion battery depends on how it is used because there are multiple degradation mechanisms, each influenced by different utilization patterns.

However, most techno-economics studies use a simplistic battery model not capable of accounting for this effect in order to simplify the optimisation. Some studies include a simple empirical correlation based on measured degradation tests to improve accuracy, e.g. [1]. Although this can give extra insights, the validity of the used correlations in real grid applications is not proven.

In this study, three battery models of increasing accuracy are developed: a bucket model that only accounts for the state-of-charge and the maximum number of cycles in the battery life; an equivalent circuit model with an empirical degradation correlation as described by Schmalstieg et al. [2]; and a Single Particle Model [3] extended with a thermal model [4] and a side reaction responsible for growing the Solid Electrolyte Interface layer [5].

The accuracy of the three models in predicting degradation is assessed by comparing the simulations with two large degradation experiments. The bucket model is not very accurate. The equivalent circuit model is accurate for calendar ageing, but cycle ageing is problematic. The Single Particle Model has the highest overall accuracy, although the error for cycle ageing is still quite large.

In a second part, these three battery models are coupled with an economic model to maximise the profit of the battery trading on the wholesale power market: by buying power on the wholesale market when it is cheap and selling power when the price is high, a battery could make a revenue. The optimisation to maximise revenue and minimise battery degradation is nonlinear and advanced techniques have to be used to allow a long time horizon. Simultaneous discretisation and multiple shooting are used to reformulate the problem to a set of nonlinear algebraic constraints [6]. Sparse automatic differentiation is used to calculate the gradient and Jacobian needed by IPOPT, which carries out the nonlinear optimisation. Finally, a sliding window approach allows simulating one year as a series of optimisations of a couple of days each.

Each optimisation is carried out twice: one maximising revenue (not accounting for degradation) and once maximises ‘net profit’ (revenue minus the degradation cost). This results in 6 optimal utilisation profiles. Figure 1 shows these profiles for the first week of the year.

Results show large performance gains by using more accurate battery models. The better the dynamics of a battery are modelled, the smaller the safety margins to avoid under- or overcharges and the larger the capacity that can be accessed by the optimisation, from 65% for the linear model to 95% for the Single Particle Model. This directly increases the revenue, which scales almost linearly with the accessible battery capacity. Secondly, accounting for battery degradation in the optimisation massively reduces the (simulated) capacity lost in a year’s operation, from 2.75% when revenue is maximised (not accounting for degradation in the optimisation) to 0.55% when degradation is co-optimised. Both goals can be achieved at the same time. Starting from the bucket model maximising revenue, the revenue can be increased and at the same time the battery degradation can be decreased. This leads to a 175% larger net profit for the Single Particle Model. 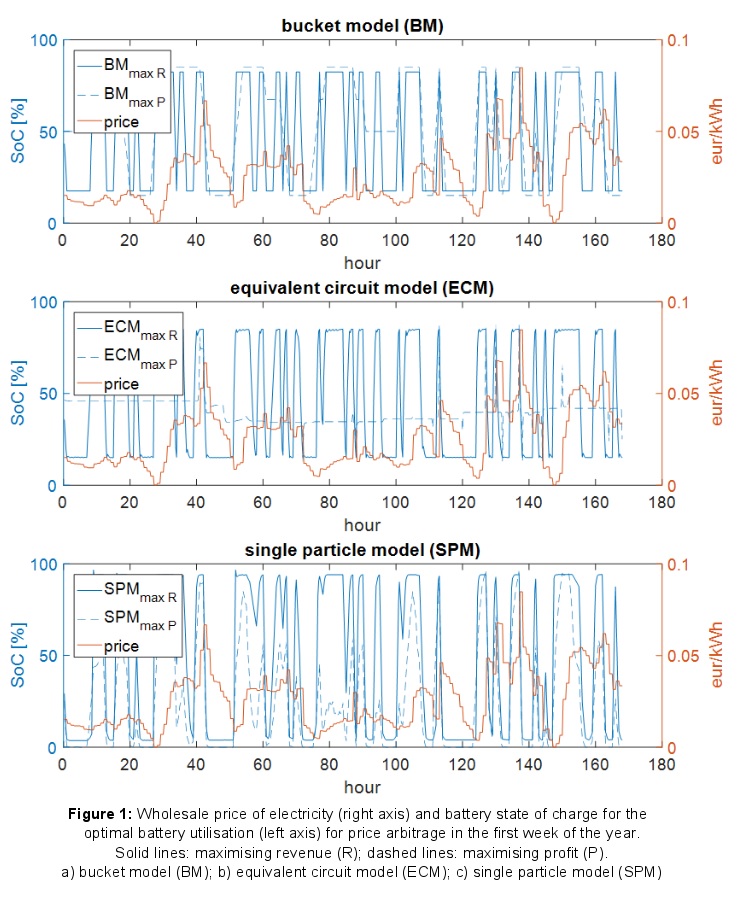