To achieve high platinum dispersions, platinum is typically supported on high surface area carbon. However, elemental carbon is not the thermodynamically favored state under PEMFC operating conditions of acidity and potential. Catalyst support, e.g., carbon, corrosion occurs during fuel cell operation, which can be greatly exacerbated by SD/SU cycles when hydrogen/air fronts are present on the fuel cell anode. Carbon corrosion results in thinning of the catalyst layer and changes in surface hydrophobicity, contributing to degradation of the catalyst and accelerating performance losses. The high cost of the noble metal(s) used as the catalyst makes this a crucial area requiring durability improvement.

Porous electrodes lose substantial porosity during PEMFC operation, which does not appear to correlate directly with loss of carbon during corrosion reactions. Compaction of the electrode layer reduces the pore volume within the electrode and can negatively impact performance due to increased mass transport losses.

Advanced alloy catalysts maintain their electrode structure for some period of time during ASTs, but eventually display similar pore collapse and loss as that observed for Pt-only catalysts supported on high-surface-area-carbons. The loss of pore volume is shown by impedance measurements to result in large increases in mass transport losses. The initial pore size distribution within the catalyst layer shows a range of sizes with an average pore diameter of 120 nm. This average pore diameter holds for up to 500 AST cycles; however, after 1000 AST cycles the average pore diameter is reduced to 40 nm. The initial pore sizes exhibit a distribution centered around 50-99 nm, but range in size up to ~ 300 nm (See Figure 1a). After the AST, most of the remaining pores are < 50 nm, with a few pores measured above 50 nm (See Figure 1b). During the carbon corrosion AST, PtCo alloy catalyst particles show a loss of Co, changing from 18 at.% Co initially to 14 at.% Co after the AST, further degrading the performance of the electrode. 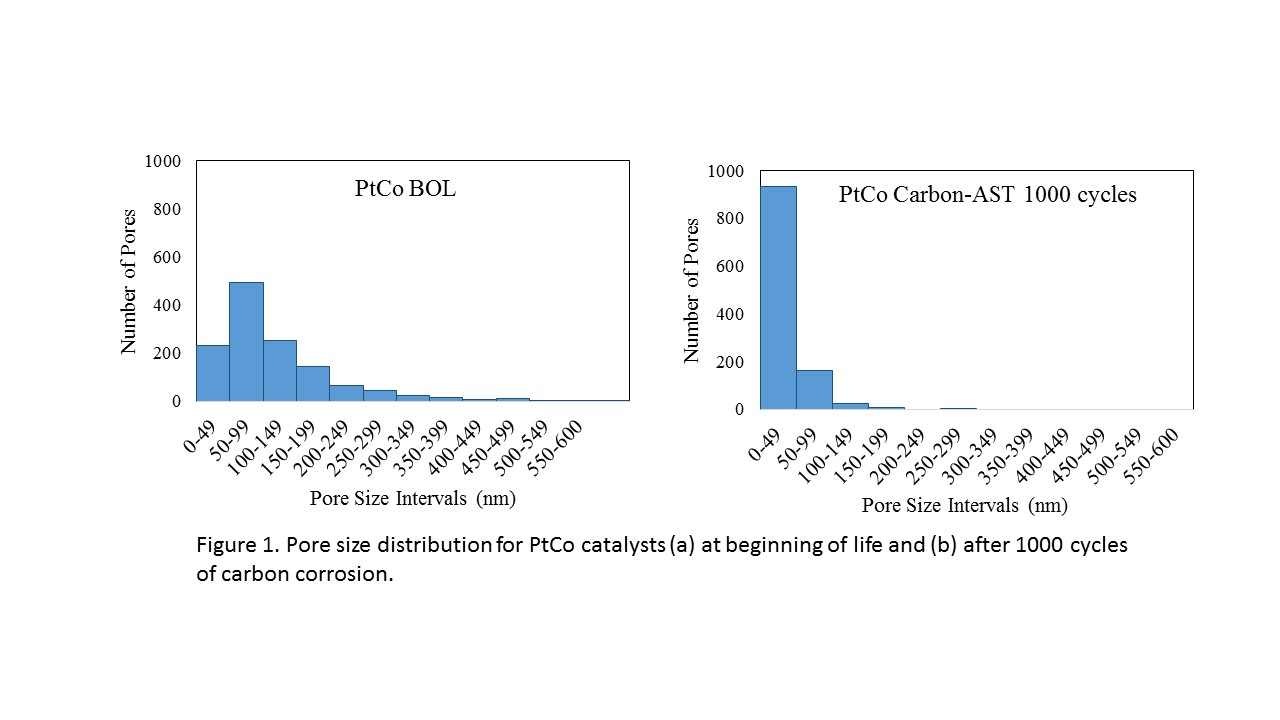