National Harbor 2 (Gaylord National Resort and Convention Center)
G. S. Harzer (Technical University of Munich), A. Orfanidi (Technische Universität München), H. A. El-Sayed (Technical University of Munich, Chemistry department), P. Madkikar, and H. A. Gasteiger (Technische Universität München)
For large scale application of H2 powered proton exchange membrane fuel cells (PEMFCs), their cost has to be reduced substantially. As the platinum catalysts largely contributes to the overall cost, a reduction of the Pt loading to <0.1 mgPt/cm2MEA on the cathode electrode is required.1 At such low Pt loadings, various kinetic and/or transport resistances occur at the air cathode, which result in voltage losses at high current density that have not yet been fully explained.2,3

Additionally, the carbon support strongly influences PEMFC performance in different ways. For high-surface area carbon supports with significant micropore area, e.g., Ketjenblack, a high mass activity is observed under pure O2 at 0.9 V, while their high current density performance is often inferior to catalysts based on low-surface area supports (e.g.,Vulcan XC72). The latter, in turn, display lower O2 mass activities. In a previous study, it was suggested that this be due to the difference in the morphology of the deposited Pt nanoparticles, which were suggested to be located largely inside the carbon-support micropores in the case of Ketjenblack and largely on the outer surface of the carbon-support in the case of Vulcan XC72.4 The authors argued that the reduced poisoning of the oxygen reduction reaction (ORR) kinetics by the ionomer for Pt nanoparticles deposited inside the micropores of a Ketjenblack support would lead to high O2 mass activity but simultaneously impose a high oxygen mass transport resistance.4

In this work, we demonstrate the effect of surface modification of commonly used carbon supports by NHx groups, with the goal to enhance the ionomer distribution during electrode fabrication and to positively affect the oxygen mass transport resistance, the proton resistivity of the cathode catalyst layer, and the overall H2/air fuel cell performance. This shown in Figure 1, comparing the H2/air differential flow performance of MEAs with low Pt cathode loadings based on either conventional catalysts (20 wt.% Pt/KB and 20 wt.% Pt/Vu) or on an NHx-modified Vulcan carbon based catalyst (20 wt.% Pt/V‑NHx). We attribute the superior performance of the latter to a more homogeneous ionomer distribution on the NHx-modified carbon surface, which significantly reduces the unaccounted for voltage losses at high current density.5

Additionally, we will show and discuss how the high current density MEA performance of Ketjenblack supported platinum catalysts can be improved.

Figure 1 Polarization curves for differently supported 20 wt.% Pt/C catalysts at 80 °C/100% RH operated with H2/10% O2(N2) (2000/5000 nccm) at 170 kPaabs, in a 5 cm2 active-area single-cell. The sketch is a conceptual illustration of the catalyst structure and the ionomer distribution. Pt loadings of the MEAs based on a 15 mm thick low-EW PFSA membrane are 80 and 70 mgPt/cm2 for anode and cathode, respectively (error bars represent two independent repeat measurements).

This work has been supported by Greenerity GmbH and the German Federal Ministry of Economy (BMWi project support number 03ET2058C) within the HyMotion5 research collaboration. The authors thank Christoph Simon for consulting on the mass transport resistance measurements. 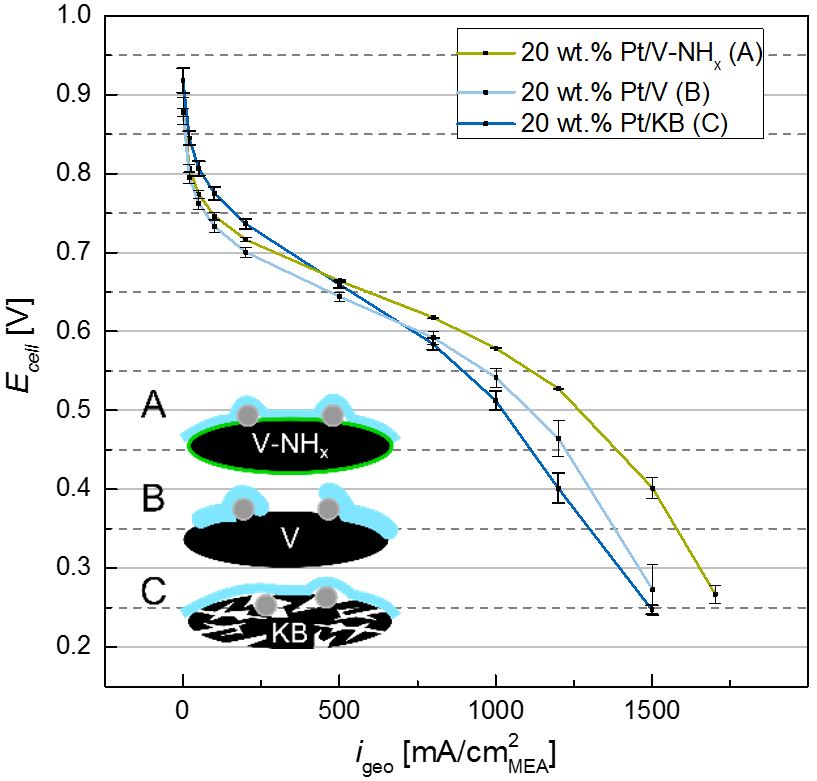