Camellia 2 (Gaylord National Resort and Convention Center)
R. Santucci Jr., B. Kannan (University of Virginia), W. Abbott (Battelle), and J. R. Scully (University of Virginia)
Due to its high strength-to-weight ratio, aluminum alloy 2024-T351 (UNS A92024) is commonly employed in aircraft airframes for commercial and military application. The heterogeneous microstructure of this alloy makes it susceptible to localized corrosion in the form micro-galvanic coupling between the matrix and constituent particles1. Corrosion induced damage must be prevented with an actively protective coating system. For this reason, a Mg-rich primer (MgRP) coating was developed for the protection of 2024-T351. The MgRP system consists of an epoxy-based primer with metallic magnesium pigment and polyurethane-based topcoat applied over pretreated 2024-T3512-7 (Figure 1).

The role and effect of pretreatment, MgRP, and topcoat on the coating’s performance has been the subject of several inquiries4-6,8,9. These studies show that the MgRP operates primarily via a sacrificial anode-based cathodic protection where 2024-T351 is protected from corrosion during Mg oxidation. However, additional protection mechanisms may operate as well such as beneficial coverage by Mg(II) corrosion products which chemically deposit onto remote scribe areas exposing the substrate. For this reason, the performance of a MgO-rich primer (MgORP) was also studied to assess chemical protection effects of stored and released Mg2+ (both in solution and as various corrosion products) as a source of chemical inhibition and to investigate its own merit as a reliable coating for corrosion protection (Figure 1).

This investigation sought to determine the mechanisms of protection brought about by Mg-converted and MgO pigments towards artificial scratches in coatings on 2024-T351. It is hypothesized here that additional protection is afforded by Mg2+ in the form of aqueous ions and, perhaps more importantly, corrosion product. This hypothesis is tested by exploring local chemical conditions in scribes exposing 2024-T351 that arise as a result of the corrosion of MgRP or chemical dissolution of MgO. It merits comment that this hypothesis pertains to both MgORP and MgRP after which the Mg pigment has been converted to corrosion product from exposure.

In order to examine the fate of Mg upon oxidation and how oxidized Mg affects the corrosion protection behavior of the coating system (both intact and with defects exposing the substrate), this investigation explored a Mg and MgO primer system in a variety of exposures. Coatings were tested in laboratory exposures such as Cycle Testing4,6 in 5 wt % NaCl and ASTM B-117 and also in marine and inland field exposure. X-ray Diffraction monitored the depletion of crystalline Mg and MgO and their conversion to crystalline corrosion products in the coating5-7,9. The quality of the primer and/or topcoat barrier was monitored with electrochemical impedance spectroscopy. Energy dispersive spectroscopy and Raman spectroscopy tracked Mg2+ migration from the primer towards an artificial scratch4-6,9. The amount of Mg in the scratch increased with exposure time. Moreover, Mg corrosion products (like Mg(OH)2) were deposited onto 2024-T351 substrate to explore how they impacted the corrosion behavior of bare 2024-T351 as assessed by electrochemical testing.

From the results of this investigation, an explanation been proposed to rationalize how a MgO primer affords protection against corrosion of 2024-T351. This mechanism explains how MgORPs function towards corrosion protection and also why MgRP that has largely been depleted of Mg to form corrosion products (like Mg(OH)2, MgO, MgCO3) continues to protect the 2024-T351 substrate from corrosion. Validating this proposed mechanism will increase our understanding of the long-term protection behavior of spent MgRP and of MgORP coating systems. 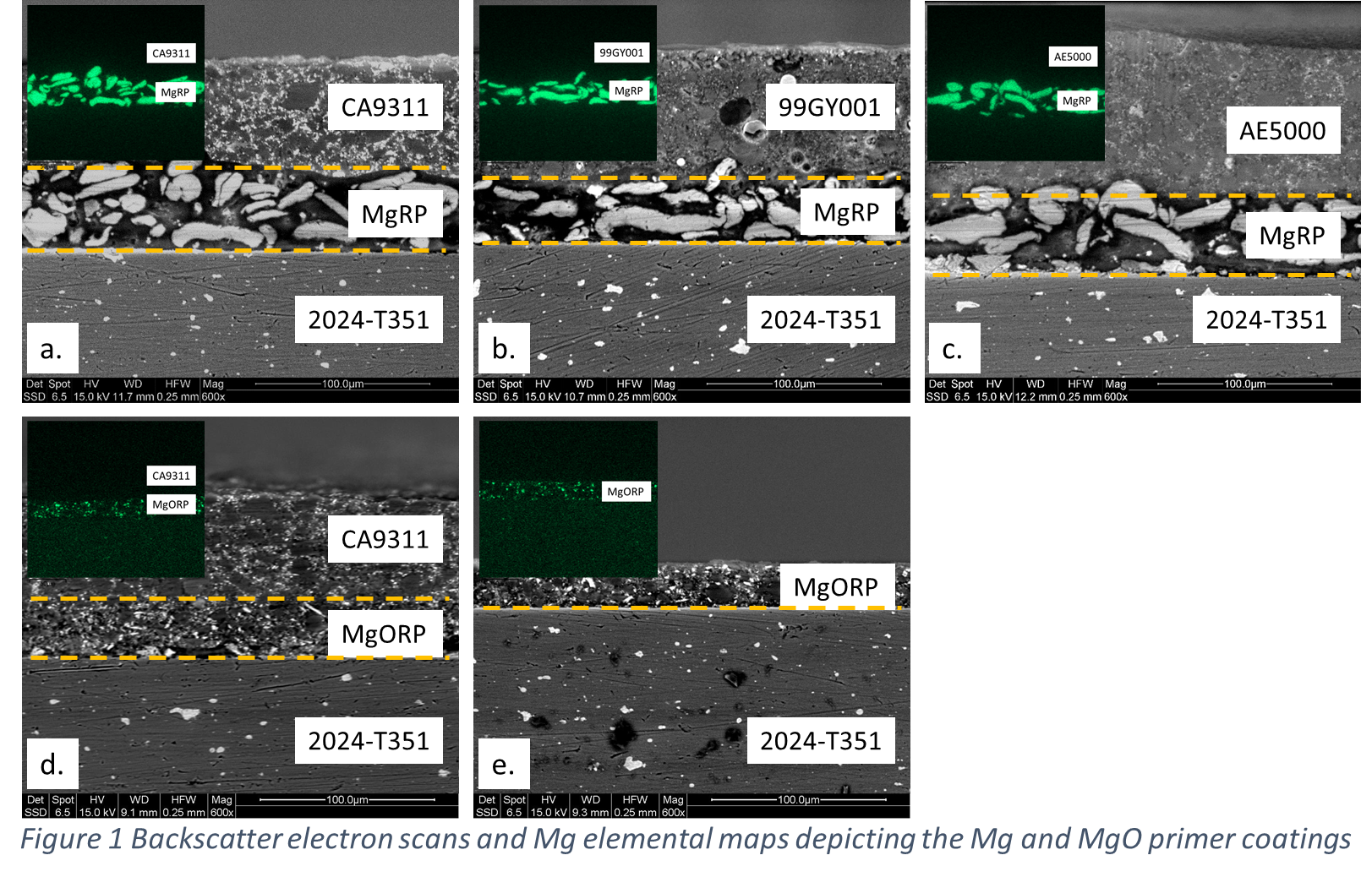