Maryland C (Gaylord National Resort and Convention Center)
S. A. Krachkovskiy, J. D. Bazak (McMaster University), J. M. Foster (University of Portsmouth), B. Balcom (University of New Brunswick), I. C. Halalay (General Motors Global R&D), and G. R. Goward (McMaster University)
The operation of battery management systems requires that the transient conditions experienced by a battery in electrified vehicle applications can be accurately described through battery modeling. Reliable data on the transport properties of electrolyte solutions, as functions of both salt concentration and temperature, are a prerequisite for such a task. The accurate characterization of the transport parameters is a complex problem, because the values of ionic diffusion coefficients in an electrolyte solution depend strongly on the salt concentration. At the same time, the salt concentration inside a battery is neither stationary nor homogeneous, during battery operation at high charge/discharge rates. It is, rather, a function of current density, time and distance from the electrodes.

Recently, MRI was used for in operando characterization of materials used in Li-ion batteries. The main advantage of MRI over commonly used methods, such as NMR and electrochemical techniques, is its ability to provide spatially resolved details regarding the chemical and dynamic features of solution species. Therefore, such data enable a more accurate representation of the processes occurring in an electrolyte solution under an applied electrical potential, instead of values averaged over the entire volume of a sample cell.

Using in situ MRI, we have unambiguously mapped the large concentration polarization experienced by an electrolyte solutions during battery operation.1 The concentration gradient created in the electrolyte solution of the cell under galvanostatic conditions will increase until a steady-state (time invariant) condition is achieved, when the diffusion flux compensates for the migration flux of the ions. Our results confirm that the concentration gradient developed under such conditions is proportional to the applied current (Fig. 1b) as described by the diffusion-migration equation (Eqn. 1), where i is the current density and F is the Faraday constant.2 We have shown previously that, while the degree of ion pairing is quite high (up to 67%) in electrolyte solutions under normal operating conditions, it is almost constant during a steady-state NMR gradient measurements (with salt concentrations varying from 0.8 to 1.2 M).3 Therefore, one can use averaged diffusion coefficients of charged and neutral species measured by pulsed field gradient NMR (PFG-NMR) in Eqn. 1. Also the total salt concentration, obtained directly by MRI should be used, instead of concentration of free ions.2 The inverse modeling of evolution of salt concentration profiles measured by in situ MRI under applied electric current also supported this conclusion.4 Therefore, by combining the PFG-NMR and the in situ MRI techniques into one experiment, one can simultaneously determine the distribution of salt concentration and the salt diffusivity in the electrolyte solution during a galvanostatic experiment (Fig. 2). It can be readily seen that the diffusion coefficient has a significant dependence on the salt concentration, with the values of D measured at opposite ends of the cell varying by more than 60%. Such changes obviously must be taken into account in order to provide an accurate description of mass-transport. The Li+ transference number (t+) can then be obtained by means of Eqn.(1). A slight decrease in t+ with concentration was observed, which can be explained by an increase in ion association. However, with the exception of data point at the lowest concentration, all of values of the Li+ transference numbers thus obtained fall within the experimental error and t+= 0.31 ± 0.03.

The formed concentration gradient affects not only the mass transport in electrolyte solution, but also the electrode lithiation. The electrolyte depletion prevents the active material in the solid from being lithiated in regions where electrolyte has been depleted. Furthermore, when the electrolyte concentration approaches zero, its conductivity drops, significantly hampering the process. The current tends to flow into the particles nearest the separator until they are completely lithiated, causing the intercalation reaction to occur preferentially at the front of the electrode. Implementation of pure phase-encoding MRI methods allows us to visualize non-uniform lithiation of the graphite electrode during cycling of Li-ion cell (Fig. 1c), leading to the next level of battery performance characterization. 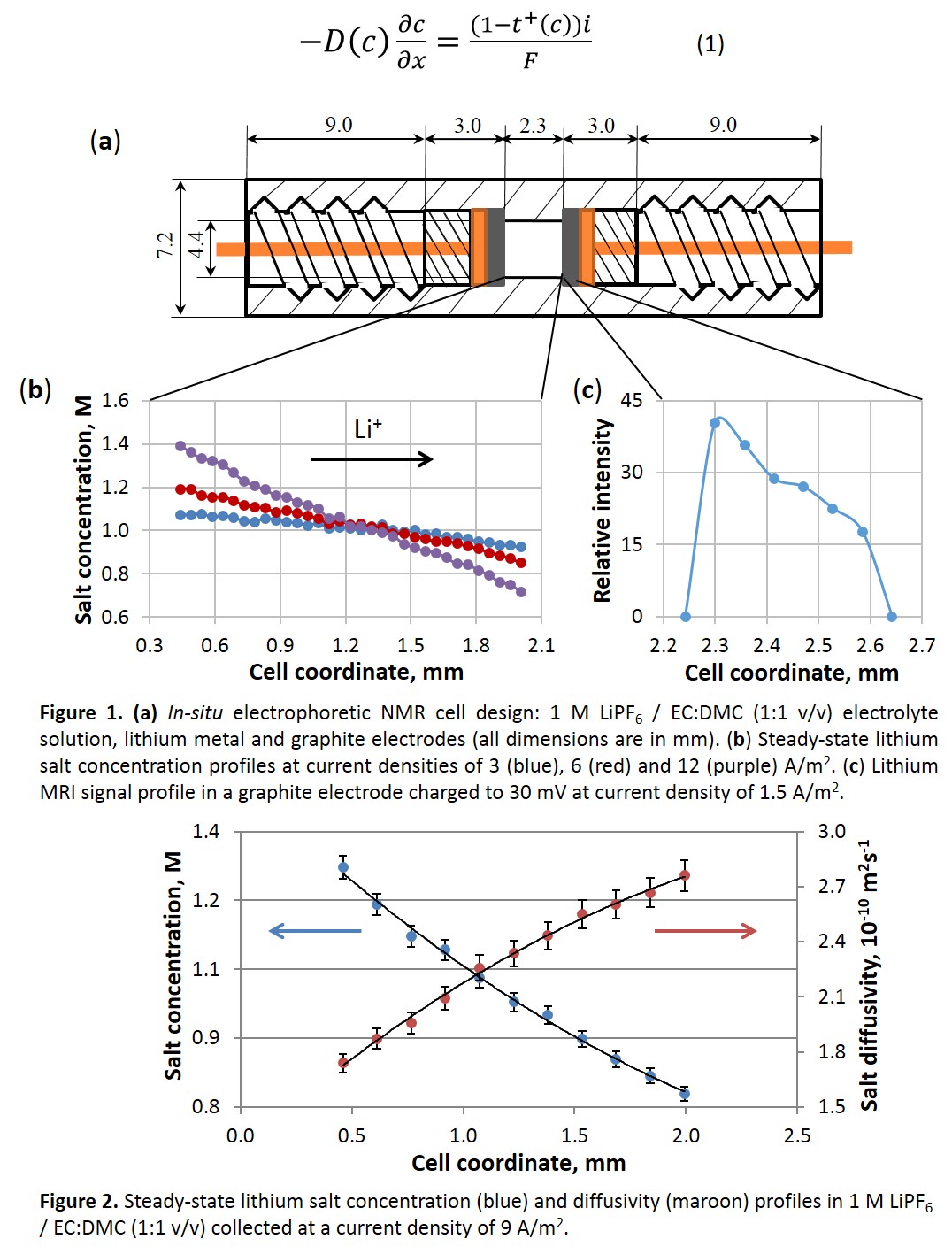