Maryland D (Gaylord National Resort and Convention Center)
L. Ma, R. Petibon, and J. R. Dahn (Dalhousie University)
The next generation of lithium ion cells for electric vehicles (EVs) requires longer lifetime and higher energy density. The use of electrolyte additives is one of the most effective ways of improving cell performance1–3. In this work, Li[Ni0.42Mn0.42Co0.16]O2 (NMC442)/graphite pouch cells demonstrate superb performance at high voltage when ethylene carbonate (EC)-free electrolytes, using a solvent mixture that is > 95% ethyl methyl carbonate (EMC) and between 2 and 5% of an “enabler”, are used.

The “enablers”, required to passivate graphite during formation, can be vinylene carbonate (VC), methylene-ethylene carbonate (MEC), fluoroethylene carbonate (FEC) or difluoro ethylene carbonate (DiFEC) among others. In order to optimize the amount of “enabler” added to EMC, gas chromatography coupled with mass spectrometry (GC-MS) was used to track the consumption of “enabler” during the formation step. Storage tests, electrochemical impedance spectroscopy (EIS), ultrahigh precision coulometry (UHPC), long-term cycling, differential voltage analysis and isothermal microcalorimetry were used to determine the optimum amount of enabler to add to the cells. It was found that the graphite negative electrode cannot be fully passivated when the amount of “enabler” is too low resulting in gas production and capacity fade. Using excess “enabler” can cause large impedance and gas production in most cases. The choice of “enabler” also impacts cell performance.

Figures 1a and 1b show the amount of enabler left and the percentage of EMC trans-esterification as a function of the initial enabler content after the first cycle (formation) of cells at 40°C with a current of C/20 up to 4.4 V. The dashed blue line in Figure 1a is a line of slope 1. Comparing the data for cells with FEC in Figure 1a to the dashed blue line shows that only 2% FEC was consumed during formation even if the initial FEC content was 3, 4 or 5%. By contrast when MEC is used, the amount of MEC consumed increases with the initial MEC content, since only about 0.5% MEC is left when the initial MEC content was 5%. Figure 1b shows the percentage of EMC that underwent trans-esterification producing dimethyl carbonate (DMC) and diethyl carbonate (DEC) 4,5. The presence of lithium alkoxides caused by the reduction of linear alkyl carbonates results causes these trans-esterification reactions. Therefore, when trans-esterification of EMC occurs it is a signal that EMC was reduced at the graphite negative electrode during formation. 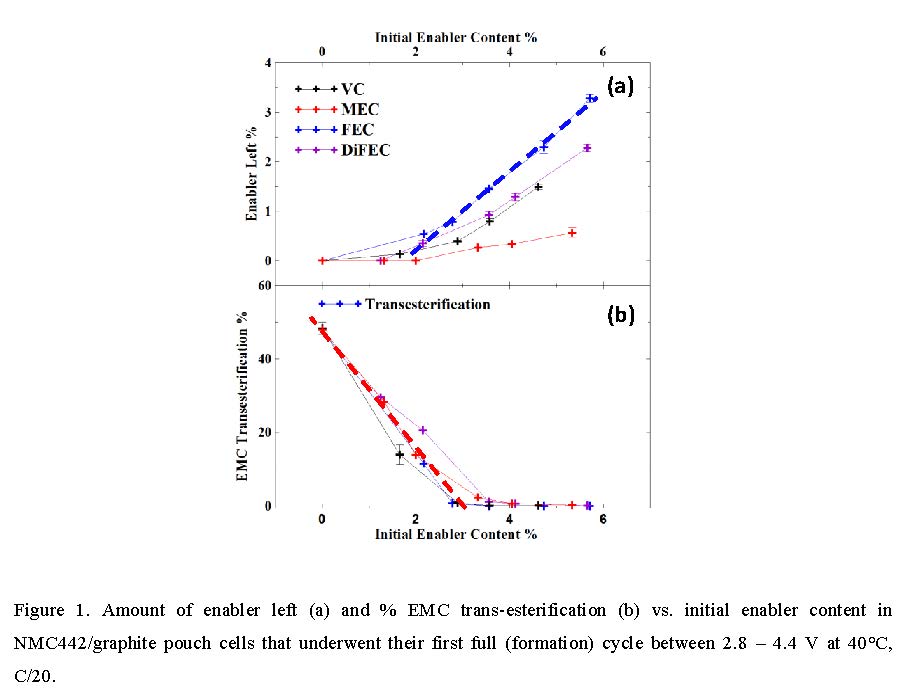