Injection of Suppressor (PEG) into the solution changes plating overpotential in a similar way to reduction of copper concentration. It is critical to note that addition of Suppressor into solutions with different copper concentration causes almost the same shift in plating potential (Fig. 2). In Fig. 2, the voltages for 1 g/l and 5 g/l copper solutions were adjusted to match the initial potential for a solution with 10 g/l of copper.

Unlike the Suppressor effect, Accelerator (SPS) and Leveler (JGB) effects are clearly dependant on the changes in the copper conentrations. Accelerator component transient response shows slower and weaker depolarizatrion at the lowest concentration of copper, while the Leveler polarization effect is stronger at lower copper concentration.

Understanding the interactions between bath components at low copper concentrations enables the design of accurate electrochemical methods of analysis for each organic component. This presentation will reveal more information related to the electrochemical behavior of organic additives and inorganic components. Results of EIS investigations will also be represented. The presentation will be concluded with a discussion of analytical results for each organic additive at different concentration levels. 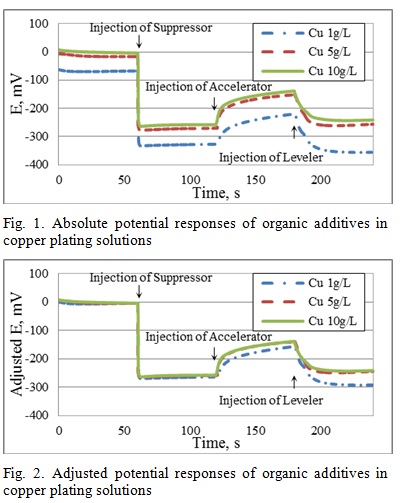