Instrumental setups of the visualization system are reported in detail elsewhere.1,2) In order to look through a cell with a single-serpentine flow channel (channel length = 1430 mm, rib width = 1 mm, channel width = 1 mm, channel depth = 1 mm) identical to that of the JARI standard cell, a cathode endplate was made of a transparent acrylic resin (Fig. 2(a)). Nine segmented current collectors (14 mm x 15 mm), also serving as ribs for the flow channel, were embedded in the cathode plate (Fig. 2(b)), which made it possible to obtain the current density at each collector. The potentials of the current collectors were controlled to be the same by the external circuit.2) Between the metal ribs plated with gold, the ribs made of acrylic resin were transparent. Therefore, p(O2) was detected not only on the GDL under the flow channel but also under the transparent ribs. The performance of the see-through PEFC with a dye coated on the GDL was reported to be nearly identical to that of the JARI standard cell at current densities lower than 800 mA cm-2.2) Therefore, the influence of the structure of the present see-through PEFC was negligibly small. 407-nm excitation light was irradiated uniformly onto the cell at the cathode. The emission from the dye sprayed on the MEA was filtered (>600 nm) and captured with a CCD camera (500 x 500 pixels, 1 pixel = approximately 120 µm x 120 µm) in a dark room. Stern–Volmer plots for calibration curves were obtained by supplying gas mixtures with various oxygen concentrations (0-25%) inside the cell before the cell operation. The cell was operated at a temperature of 80 °C with the relative humidity of 53% RH. H2 and air were supplied at 300 ml min-1 during the operations. p(O2) was measured at the oxygen utilization (Uo2) from 0 to 78%

Fig. 2(a) shows a p(O2) image at Uo2 = 40% with two vertical blue lines in the transparent region. Non-visualized regions, such as the metal ribs, were masked in black.1,2) Along the dashed line on the right rim in Fig. 2(a), p(O2) was plotted in Fig. 2(b) at Uo2 = 0, 20, 40, 60 and 78%. At Uo2 = 0% there is no periodic undulations. During the power generation, 13 undulations appeared (Fig. 2(b)) with the period of 4 mm. The peaks of the undulations seen in Fig. 2(b) are related to the curves in the serpentine flow channel as indicated by red arrows in Fig. 2(a’) (zoomed image of a red rectangle in Fig. 2(a)) and Fig. 2(b), where the gas flow came in in the right direction and went out in the left direction; at the curves, the gas was pushed through the GDL to make p(O2) higher.1) Between the neighboring two curves with high p(O2) pointed at by red arrows in Fig. 2(a’), p(O2) was low as seen in Fig. 2(b). p(O2) was seen to increase from L = 50 to 54 mm. This unexpected increase is thought to have been caused by the side flow through the GDL from a small space between gasket and GDL.1) In Fig. 2(c), along the solid line in Fig. 2(a) across the flow channel and the ribs, periodic undulations in p(O2) are clearly seen; the local maximum and minimum values were observed at the middles of the flow channel and the ribs, respectively. The period of the undulations in Fig. 2(c) was 2 mm, half that in Fig. 2(b). The differences between the neighboring maximum and minimum values became larger with increasing Uo2and smaller along the flow channel from the inlet to the outlet. Details will be discussed at the presentation.

With this new method, p(O2) under the flow channels and the ribs was successfully visualized. This technique is expected to be used as a powerful tool for the cell and MEA designs.

This work was carried out under the “HiPer-FC” and “SPer-FC” projects, NEDO, Japan. 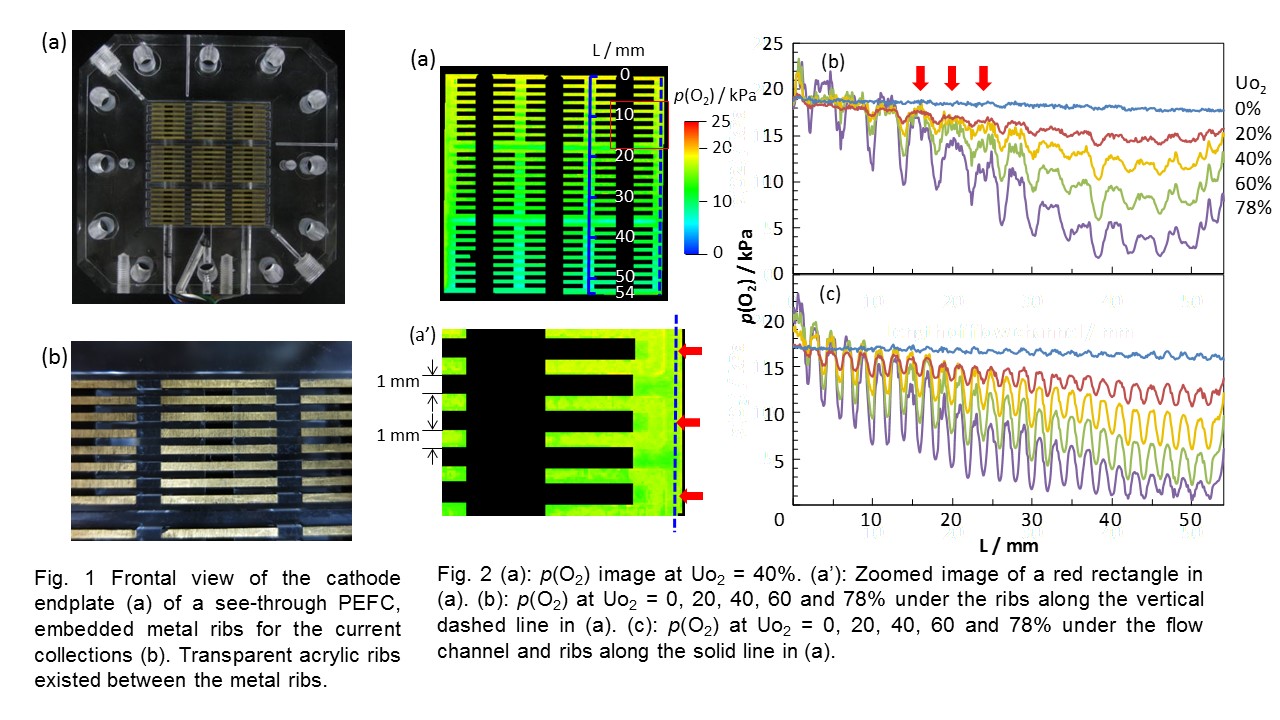