Certain automotive fuel cell operations, e.g., cold/freeze start-up, idling at low power, start-up after long shut-down periods, can lead to conditions that produce fuel cell damage if not managed properly. Drawing power under such conditions can sometimes lead to hydrogen starvation in certain cells of a stack, which can cause the cell voltage to become negative (i.e., cell reversal), leading to anode carbon corrosion and electrode damage.1 Depending on the nature of the root cause and the system control strategy, the reversal events can last from less than 1 second to a few minutes. Though relatively longer cell reversal (minute to tens of minutes) has been often reported and well understood,2 study on transient cell reversal (<1 second) has been rare. In this work, we use a 53-cm2 single cell to study cell reversal events that last 1 second or less and investigate actual anode damage both experimentally and by modeling.

Anode hydrogen starvation was created by maintaining a constant hydrogen flow into the anode, while stepping the current density from 0.02 A/cm2 up to 0.6 A/cm2 for a given time (e.g., 1 second). The hydrogen flow is sufficient for 0.02 A/cm2, but is less than the stoichiometric requirement at 0.6 A/cm2. Fig.1 shows cell voltage and current transient profiles during a cell reversal event. It is seen that cell voltage drops from 0.87V to -0.96V when the current density was increased from 0.02 A/cm2 to 0.6 A/cm2. The anode H2 flow was kept constant at 0.3 stoics at 0.6 A/cm2 current density.

Upon the increase of current density, cell voltage drops quickly to a first plateau at ~0.65V (Fig.1), which is believed to be due to polarization of cathode oxygen reduction reaction (ORR), while H2 in the anode compartment can still sustain the current for a very short period of time. After this initial plateau, cell voltage drops precipitously to a second plateau at ~-0.96V, where oxygen evolution reaction (OER) as well as carbon oxidation reaction (COR) are sustaining the reversal current (0.6 A/cm2). Although H2 is still being fed to the anode at a flow rate of 67 sccm, the hydrogen oxidation reaction (HOR) has been deactivated due to an oxidized Pt surface at elevated anode potential, which was corroborated by the H2 concentration measurement in anode exhaust using the high-speed mass spectrometer. Furthermore, due to the fast change in voltage, the capacitive current (due to double-layer capacitance) and pseudo-capacitive current (due to desorption Pt-H and formation of Pt-OH) also contribute to the overall reversal current. Thus, the true damage to anode during transient cell reversal has to be accessed by taking into account of oxidation of available hydrogen, the capacitive and pseudo-capacitive current, as well as the oxygen evolution reaction.

A kinetic model was, therefore, developed to describe the transient cell reversal by considering the above kinetic and capacitive current contributions. The model was built based on the conservation of charge which couples with hydrogen transport from flow-field to the anode catalyst layer during the transient process. It adopts the Pt-oxide growth model for the evolution of Pt-oxide coverage,3 and utilizes the previously measured kinetics for the relevant electrode reactions.3-4 Additionally, hydrogen oxidation reaction is made to be impeded at high electrode potentials, corresponding to the experimental observation. The resulting model equations are solved for transient anode potential, Pt-oxide coverage, and contributing reaction currents under a given cell reversal condition.

In this presentation, we will discuss the details of both the experimental and modeling work in understanding the contributors to the overall reversal current during a transient cell reversal event. References 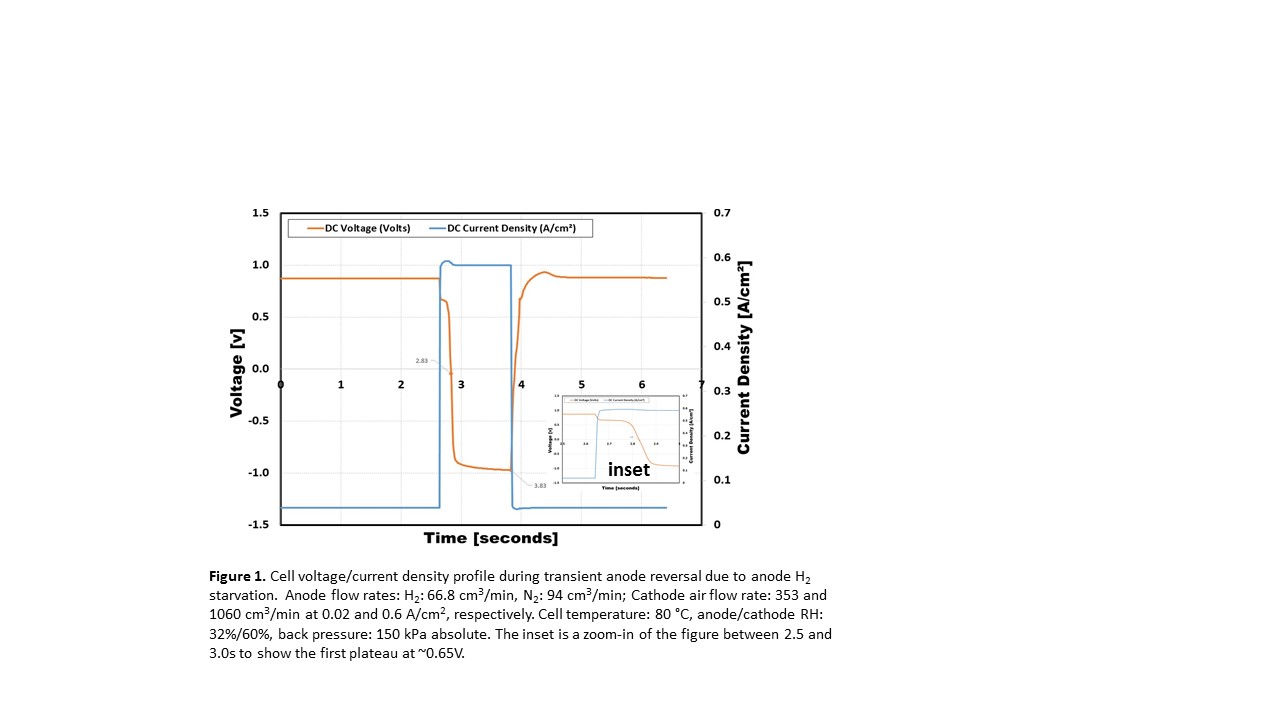