Chesapeake E (Gaylord National Resort and Convention Center)
M. Pan (Huazhong University of Science and Technology), H. Yuan (Huazhong University of Science and Techlonogy), and Y. Zhao (South University of Science and Technology of China)
Since the discovery of extremely high and non-saturated magnetoresistance in WTe2 in 2014,1 WTe2 has attracted a lot of attention. Detailed studies on WTe2 band structure indicates that well balanced electron and hole concentration in WTe2 man plays an importance role in its large magnetoresistance.2 Moreover, WTe2 was predicted to be a Type-II Weyl semimetal, where two topological nontrivial Weyl nodes exist near its Fermi level.3 And the prediction that the single layer WTe2 is a 2D topological insulator4 makes the study of single layer WTe2 transport properties essentially important. Till now, some work has been done on the transport properties of bulk WTe2 and show some hints of its exotic properties arouse from its nontrivial band structure through quantum transport measurement.5 But the study of thin films is still limited. The surface or even the whole thin film of WTe2 degrades quickly in atmosphere,6 which will ruin the transport properties of thin film WTe2 devices a lot.

To solve this problem, we introduced hexagonal BN (h-BN) to encapsulate WTe2 thin film so that it is absolutely isolated from oxygen and moisture in atmosphere. Thin film WTe2 encapsulated by h-BN was achieved by a series of dry transfer processes. The process was illustrated in Figure 1. Here, graphene with special shape was selected be used as source/drain electrodes in WTe2 devices. Due to the strong van der Waals interaction among 2D materials, WTe2 was perfectly sealed by BN and graphene and is isolated from ambient environment. Raman spectroscopy on encapsulated WTe2 indicates that the encapsulation interrupts the degradation of WTe2 effectively. Then, e-beam lithography, inductively couple plasma etching, and e-beam evaporation of Ti and Au were used to pattern metal electrodes. As the surface of WTe2 was protected by BN, the transport performance of WTe2 devices was largely enhanced. This dry transfer and encapsulation method also provide a good platform for 2D flexible devices. By transfering the whole encapsulated structure to a flexible substrate, a 2D flexible device with high performance could be envisioned. 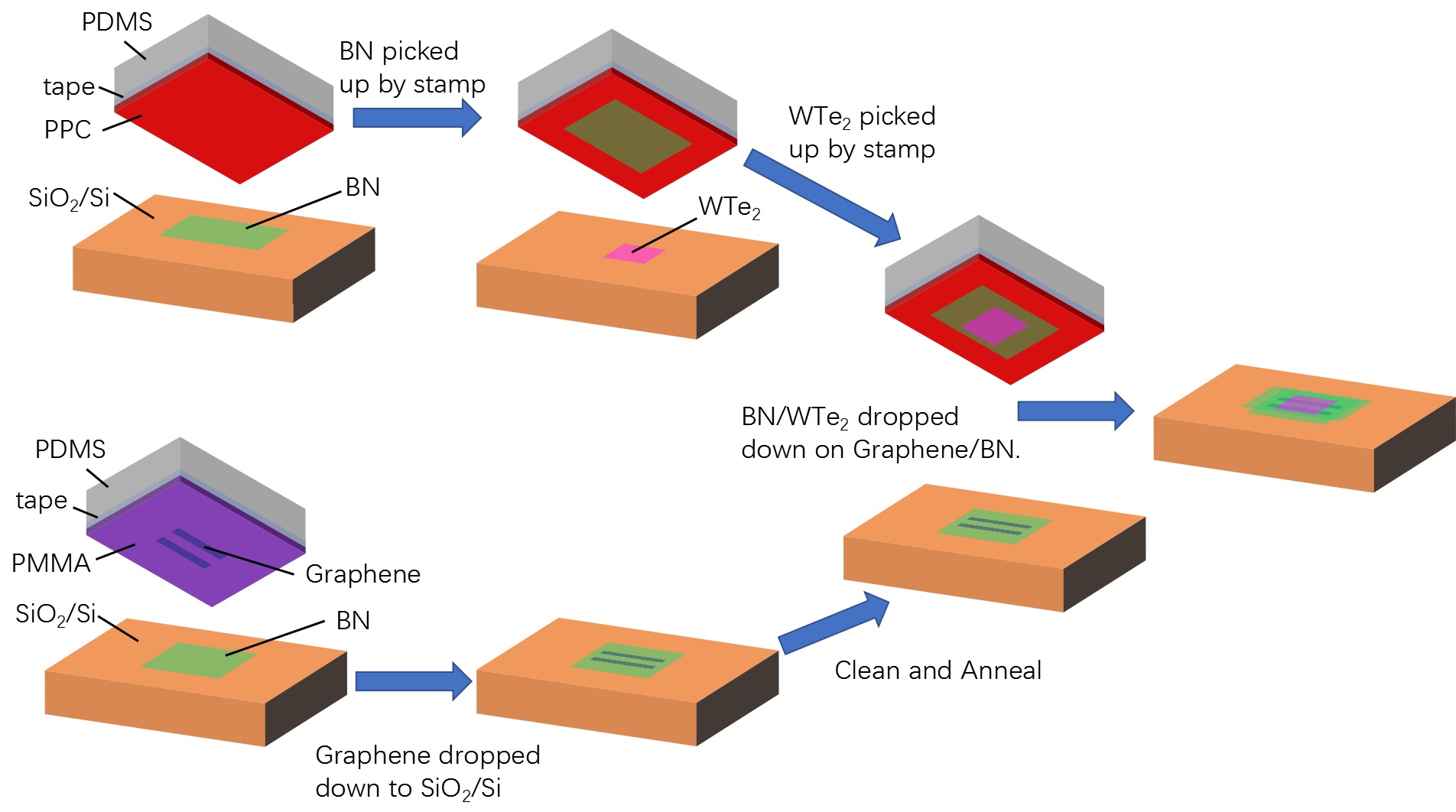