Taichi Fujinami a, Shinya Yamada a, Yusuke Tachikawa a,

Kimihiko Ito b, Yoshimi Kubo b, and Morihiro Saito a

a Department of Applied Chemistry, Tokyo University of Agriculture & Technology,

In recent years, rechargeable Li-air batteries (LABs) have attracted much attention as large scale energy storages for electric vehicles and stationary energy storage systems because of the high energy density over 5 times larger than that of the conventional Li-ion batteries (LIBs) [1]. However, there are some problems to be solved for the practical use such as the choking of air electrode by the generated L2O2 at discharging and the high overpotential for the electrochemical oxidation of Li2O2 at charging. Especially for the anode side, Li dendrite growth during discharge/charge cycles should be also suppressed to prevent the short circuit of LAB cells. In this study, we investigated the relationship between ion transport behavior and Li deposition/dissolution reaction at Li metal anode from two aspects; i.e. i) Li+supplying rate to the Li metal anode and ii) charge transfer rate through the surface layer containing SEI films at Li metal anode to understand the Li deposition/dissolution behavior.

For the preparation of electrolytes for LABs, LiSO3CF3 (LiOTf, 99.0%, KISHIDA) and LiN(SO2CF3)2 (LiTFSI, 99.9%, KISHIDA) and LiN(SO2F3)2 (LiFSI, 99.0%, KISHIDA) were used as supporting salts, and dissolved in tetraglyme (G4, Japan Advanced Chemicals, H2O content: < 30 ppm) as a solvent in an Ar-filled dry box to prepare the 1.0 M glyme-based electrolytes. For the former aspect i), self-diffusion coefficient of Li+ (DLi+) in the electrolytes was measured by PGSE-NMR [2] along with the viscosity h, density r and ionic conductivity s. The degree of apparent dissociation aapp of Li salts was also estimated from the D and s by using Nernst-Einstein equation [2]. The later aspect ii) was examined with [Li | Li] symmetric and [Li | KB-loaded (1 mg cm-2) carbon paper] LAB cells containing the same electrolytes.

Fig. 1 shows the polarization curves of [Li|Li] symmetric cells with the three kinds of electrolytes at 30oC. The magnitude of overpotential h for the Li deposition/dissolution reaction was LiOTf >> LiTFSI > LiFSI. The order of h was in good agreement with that of ionic conductivity for the electrolytes. For the LiFSI-based electrolytes, the h value rather became smaller than those at the initial cycling. In fact, the SEM images of the surface of Li metal after the test exhibited many Li dendrites especially for the LiTFSI and LiFSI-based electrolytes (Fig. 2). Namely, Li+ was more easily reacted with Li metal under the faster Li supplying condition. In contrast, no Li dendrite was observed on the Li metal anode for the LiTfO-based one. Therefore, the LiTFSI and LiFSI electrolytes are considered to have an advantage for Li+ supplying process. On the other hand, the LAB test cell showed a different Li deposition behavior against the results for the [Li|Li] symmetric cell. The surface of Li metal anode was basically covered with Li oxides and oxygen-rich polymeric film layer. Only for the LiTFSI electrolyte Li dendrite-like compound was observed. Also, the LAB test cell using LiOTf one was successfully operated as well as the other electrolytes. These different behaviors were attributed to the existence of O2 gas, which is easily reacted with Li metal anode. The detail of the effects of SEI film by the different electrolytes and the oxidation by supplied O2gas into the LAB test cells will be reported in the meeting.

This study was supported by JST “Next Generation Batteries Area in Advanced Low Carbon Technology Research and Development Program (ALCA)” from MEXT, Japan. 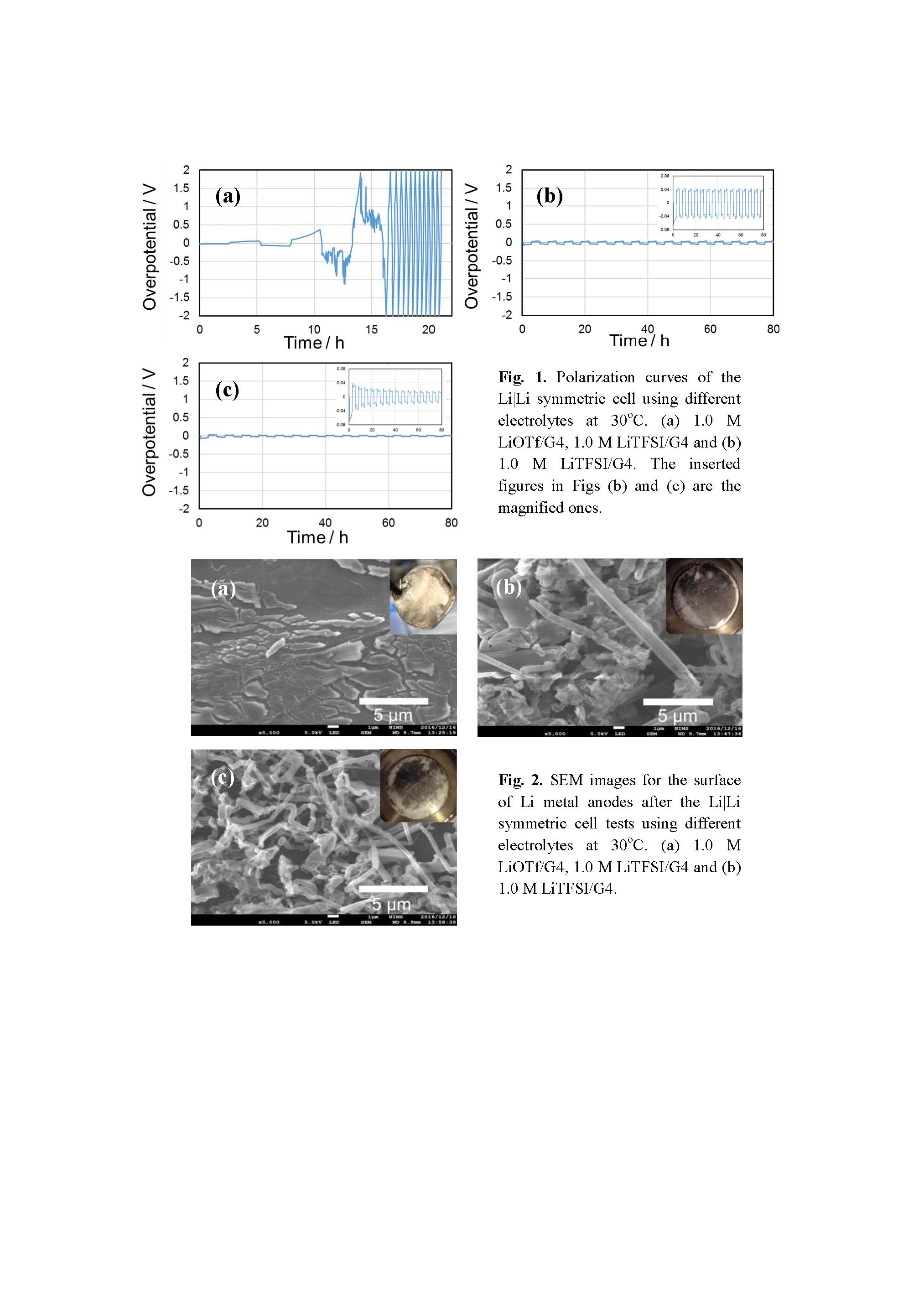